Google’s next version of Android may embrace the notch

Google may be planning to embrace the smartphone ‘notch.’

Newer smartphones are designed with notches that house cameras and other sensors, in order to accommodate for edge-to-edge screens that take up almost the entire front-facing display.

Apple introduced the notch in its high-end iPhone X, released last November. The notch houses cameras and sensors so that the iPhone is able to have an edge-to-edge screen

Android P might also be able to support other new smartphone designs, such as models that have multiple screens and foldable displays, Bloomberg said.

The new Android version will also include further integration with Google’s voice-activated Assistant, while improving battery life for Android smartphones.

By adding accommodations for the smartphone notch, Google may be trying to carve out a bigger share of the high-end device market, according to Bloomberg.

Apple consumers have traditionally been more willing to shell out extra cash for the Cupertino, Calif.-based company’s products, most recently the wallet-busting $999 (£999) iPhone X.

Designing around the notch could also mean that more advanced features are coming to Android phones, such as facial recognition technology and sensors that power a wide variety of augmented reality applications.

Not all Android phones are likely to have notches, however. Thousands of brands make smartphones that can run Android, so the operating system can be tweaked based on the device.

It’s possible that Google is planning to introduce a notch to its next generation Pixel phone, likely to be called the Pixel 3, PCWorld noted. 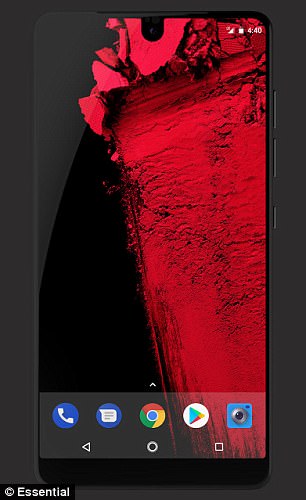 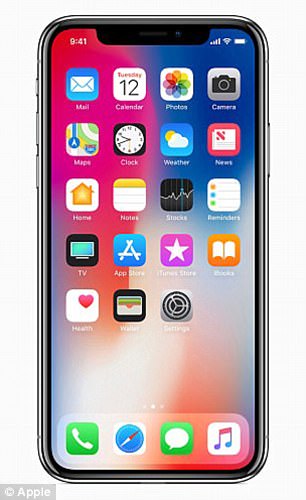 The Essential phone (left), made by former Android chief Andy Rubin, has a notch design, but Apple’s iPhone X (right) mostly popularized the feature, which houses cameras and sensors

Some Android devices already include a notch, such as an upcoming Huawei smartphone, the P20, which has a smaller notch.

The Essential phone, which is made by former Android CEO Andy Rubin, also features a notch at the top of the screen.

Samsung has also explored ways to advance their screen designs in upcoming smartphones to accommodate for advanced features like facial recognition technology and AR sensors.

A patent filed last month showed off a prototype smartphone that has two holes drilled into the top of the screen, presumably to embed cameras and other sensors.

The phone is almost entirely bezel-free, except for some very thin borders around the edges of the phone.

IS SAMSUNG WORKING ON A NOTCH-FREE ‘IPHONE X KILLER’?

The Korean tech giant recently filed a patent showing off a prototype smartphone design that features two holes drilled into the top of the screen.

The holes are likely meant to house cameras and other sensors. 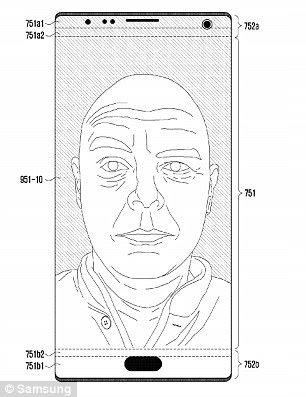 The phone is almost entirely bezel-free, except for some very thin borders around the edges of the phone.

The concept describes an ‘electronic apparatus with a hole area’ that would be able to include all those elements, plus an ‘optical sensor,’ seemingly referring to facial recognition technology of some kind.

Users would be able to decide whether images take up the full width and length of the display, or to restrict images with a small bezel at the top and bottom of the front screen.

In the filing, Samsung notes that smartphone screens have become larger, yet the size is ‘restricted’ by features like a speaker to receive phone calls, a camera and a home button.

If Samsung’s design works well enough, it’s possible that Apple may introduce it to its own line of flagship smartphones, just like it adopted wireless charging after Samsung had that feature for several years.

The patent doesn’t indicate if or when Samsung may introduce a notch-less smartphone.

The concept describes an ‘electronic apparatus with a hole area’ that would be able to include all those elements, plus an ‘optical sensor,’ seemingly referring to facial recognition technology of some kind.

This might mean that more devices will include features like Apple’s Animoji and Face ID. Some Samsung phone already have facial recognition technology.

As Apple introduced these kinds of futuristic features in its next-generation iPhone X, it ended up receiving some criticism around the notch.

Some consumers don’t like the fact that the notch takes up so much space, while reviewers called the feature ugly.