GOP congressman who led the Benghazi probe will leave…

WASHINGTON (AP) – Rep. Trey Gowdy, a powerful GOP watchdog who built his name leading the investigation into the 2012 attacks against Americans in Benghazi, Libya, has become the latest prominent Republican to head for the exits rather than run for another term.

The former South Carolina prosecutor who is chairman of the House Oversight and Government Reform Committee said in a statement Wednesday that he planned to return to the justice system, though he did not elaborate.

The committee’s lengthy investigation into the attacks that killed the U.S. ambassador and three other Americans focused heavily on Hillary Clinton’s role as secretary of state, though an 800-page report produced no smoking gun pointing to wrongdoing by her. The investigation also revealed that Clinton used a private email server for government work, prompting an FBI investigation that proved to be an albatross in the Democrat’s 2016 presidential campaign.

Today, Gowdy is involved in one of the House’s Russia investigations and the leader of a renewed review of the FBI and Clinton’s emails.

Gowdy, 53, was elected in the 2010 tea party wave that returned control of the House to Republicans. He is the ninth House committee head to step down, although several departing colleagues faced the prospect of being term-limited from that post or difficult re-election prospects. Gowdy did not have such obstacles, which made his decision all the more surprising.

“Whatever skills I may have are better utilized in a courtroom than in Congress, and I enjoy our justice system more than our political system,” Gowdy said.

Gowdy has played an important role in the House Intelligence Committee’s investigation into Russian election interference and any possible coordination with Donald Trump’s presidential campaign.

In the committee’s private interviews, he has been the chief questioner for majority Republicans and has relied on his prosecutorial experience. Among those witnesses were the president’s son, Donald Trump Jr., former White House chief strategist Steve Bannon and Glenn Simpson, a Washington opposition researcher who was behind a dossier of allegations about Trump and his ties to Russia.

This week, Gowdy was among the committee members pushing for the release of a memo, drafted by Republicans, that alleges abuses of the government surveillance powers in the Russia investigation. Democrats have called the memo a “distraction” and a selectively edited group of GOP talking points.

Gowdy’s love for the legal system is evident even in the naming of his family dogs, Jury and Bailiff. Gowdy was as an assistant federal prosecutor in South Carolina for six years before winning election as solicitor covering part of the state’s conservative northwest.

Elected to three terms, Gowdy earned a reputation as a hard-charging lawman who prosecuted a wide range of cases, including some that ended in death sentences.

South Carolina’s top federal prosecutor slot is technically open. It’s now occupied by a career prosecutor serving as acting U.S. attorney for more than a year. But Wednesday’s decision prompted no such announcements from the state’s two senators, who would propose a replacement candidate to the Trump administration.

GOP Rep. Steve Stivers of Ohio, chairman of the campaign committee that oversees Republican election efforts in the House, predicted that Gowdy’s seat will stay in Republican control in November. 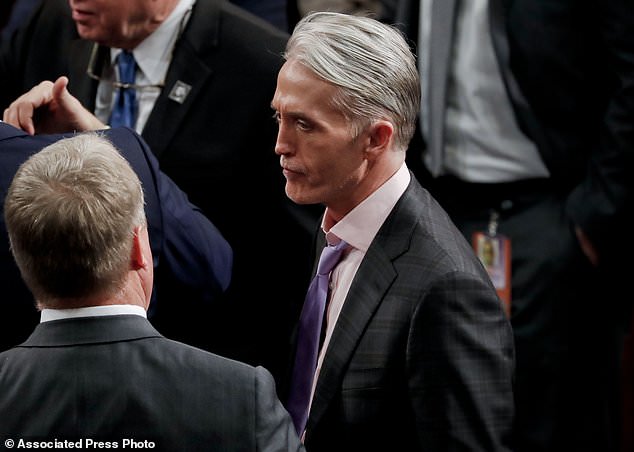 Rep. Trey Gowdy, R-SC., on the House floor for the arrival of President Donald Trump to addresses a joint session of Congress on Capitol Hill in Washington, Tuesday, Jan. 30, 2018. Gowdy, chairman of House Oversight Committee, says he will not seek re-election. (AP Photo/Pablo Martinez Monsivais)