GOP establishment accuses Bannon of being an anti-Semite

A PAC aligned with Senate Majority Leader Mitch McConnell heightened its attack on former White House Chief Strategist Steve Bannon by suggesting he is an anti-Semite in a tweet.

A day and a half before, Tarkanian had made his own pledge, asking his rival, incumbent Nevada Sen. Dean Heller to join.

‘I pledge to oppose Senate Majority Leader Mitch McConnell as Majority Leader and will instead vote for a conservative with the courage and conviction to pass “America First” policies,’ the pledge read.

Bannon had pledged to take on six of the seven Republican senators running for re-election in 2018, only allowing Texas Sen. Ted Cruz an unchallenged seat.

Former White House Chief Strategist Steve Bannon is being hammered by a Mitch McConnell-aligned PAC, after he decided to run challengers against Republicans up for re-election in the Senate next year 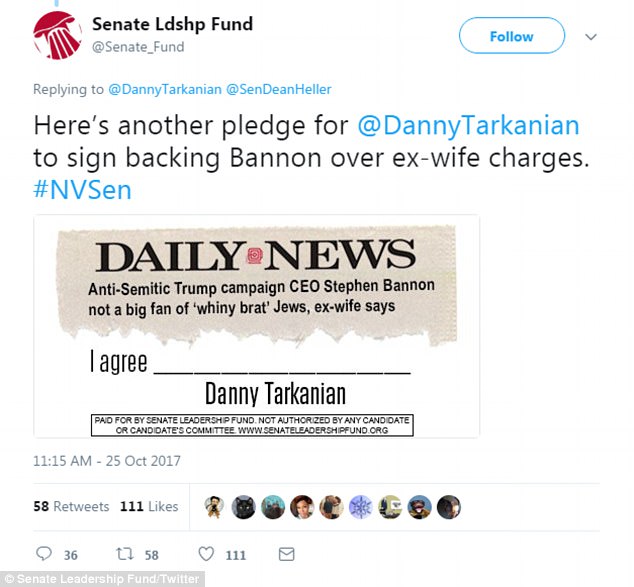 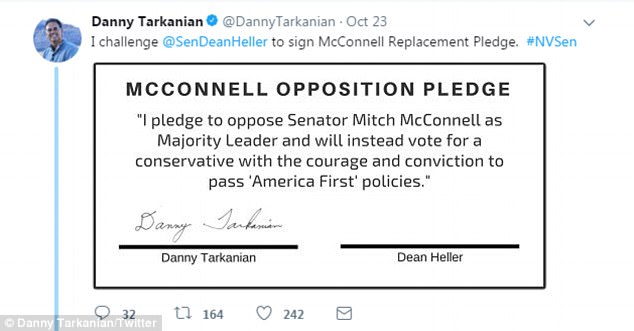 The day before, Nevada Senate hopeful Danny Tarkanian, who is being backed by Bannon, made a public pledge to attempt to oust Senate Majority Leader Mitch McConnell if elected 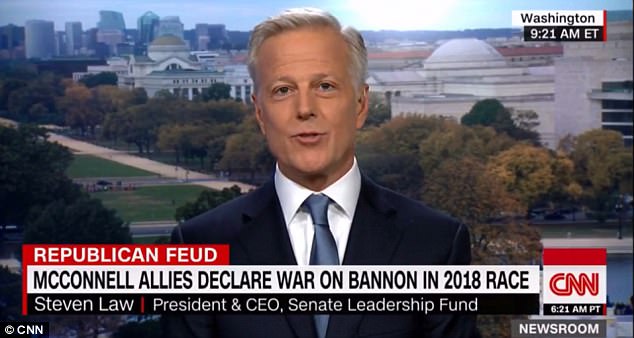 Now that number’s down to five seats, with Arizona Sen. Jeff Flake having announced Tuesday that he’s retiring.

SENATE REPUBLICANS RUNNING FOR RE-ELECTION IN 2018

*Steve Bannon won’t find a challenger for Cruz in Texas. Tennessee will also vote to replace Sen. Bob Corker, who is retiring, which is a long-held GOP seat

The former White House chief strategist, who was shown the door in August, has placed much of the blame for the president’s legislative failings on McConnell, and wants to see him ousted by senators whose politics are more in line with Trump’s.

Steven Law, the President and CEO of the Senate Leadership Fund, told CNN Thursday that ‘our goal is to help advance the president’s agenda,’ though the group also wants to keep McConnell in place and the Senate majority in Republican hands.

The fear is that Bannon’s meddling could cost Republicans the Senate.

While Democrats have way more seats to defend – 23 to be exact – Republicans only have a two seat majority in the upper chamber.

So far, Bannon has backed Tarkanian in Nevada and eyed former Blackwater CEO and founder Erik Prince as a potential challenger for Sen. John Barrasso in Wyoming.

Bannon has also threatened to take on sitting Sens. Orrin Hatch of Utah and Deb Fischer of Nebraska.

President Trump, on the other hand, called Fischer, Wicker and Barrasso last week and pledged his support, the Wall Street Journal found.

On CNN, Law warned Republican candidates who aligned themselves with Bannon they could be weighed down by the strategist’s previous remarks.

‘Candidates that get wrapped around him will have to answer for his toxic views, things that he said, his associations with the alt-right, when Democrats make him the star of their attack ads next fall,’ Law said, labeling this warning ‘our concern.’

Law charged that Bannon has made questionable statements about Catholics, Jews and Asians running Silicon Valley.

‘He’s got a long record of saying things that are very troubling,’ Law said.

A Bannon confidant told the Washington Post when he heard about the Senate Leadership Fund’s tweet, he laughed.