A white Republican lawmaker in Georgia warned a black former Democratic colleague that she might ‘go missing’ near a swamp if she kept advocating for Confederate monuments in the state to be removed.

Georgia state Rep. Jason C. Spencer shared a photo of himself on Monday to Facebook outside of the Jefferson Davis Memorial in Irwin County, which is roughly 30 minutes north of where he was raised.

‘Passing through South Georgia on my way back … This is Georgia’s history. #DealWithIt.’ Spencer wrote in the post, which was first reported by the Atlanta Journal-Constitution.

Former Georgia state Rep. LaDawn Blackett Jones then responded to Spencer on his Facebook post. She suggested he get his visit and keepsake photos taken before the memorial of Davis is ‘torn down’. 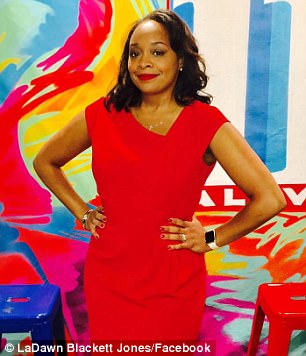 Georgia state Rep. Jason C. Spencer (left) warned former Georgia state Rep. LaDawn Blackett Jones that she might ‘go missing’ near a swamp if she kept advocating for Confederate monuments in the state to be removed 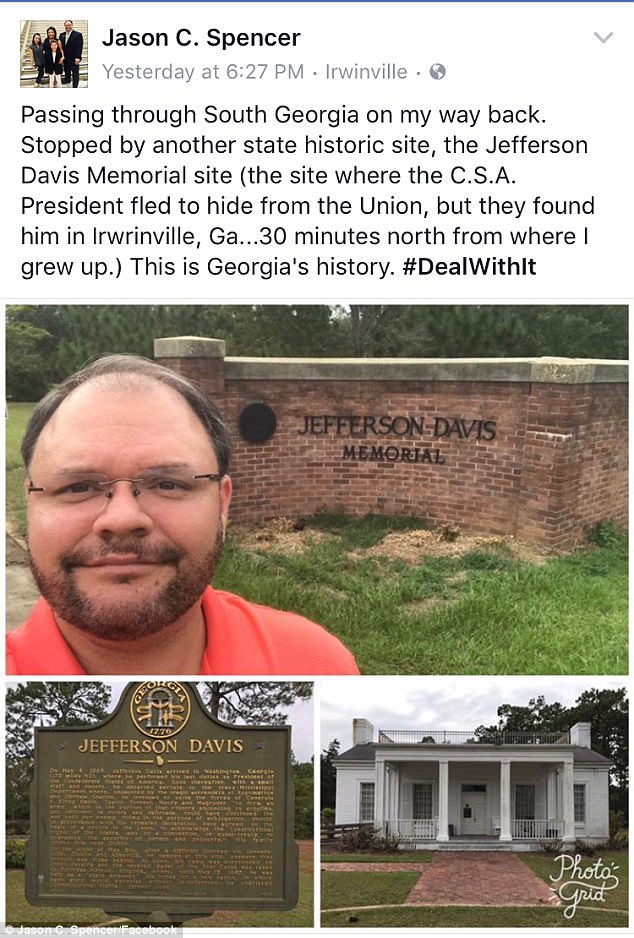 Spencer shared a photo collage (above) of himself on Monday to Facebook outside of the Jefferson Davis Memorial in Irwin County, which is roughly 30 minutes north of where he was raised

‘Are state tax dollars going to this? If so I need to take a closer look at the state budget,’ Jones wrote. ‘I’ll deal with it but don’t want to pay for it.’

Spencer then responded and wrote that the memorial is ‘not going’ away anytime soon.

‘Those folks won’t put up with it like they do in Atlanta,’ Spencer, who sits on several Georgia House of Representatives committees, including Games, Fish & Parks, wrote. ‘It best you move on.’

Jones wrote Spencer back and told him to put his ‘hoods’ and ‘tiki torches’ away. She suggested that Confederate statues be moved to private property.

But the Republican than took the exchange with Jones in a seemingly threatening direction.

‘I can guarantee you won’t be met with torches but something a lot more definitive,’ Spencer wrote. ‘People in South Georgia are people of action, not drama.’ 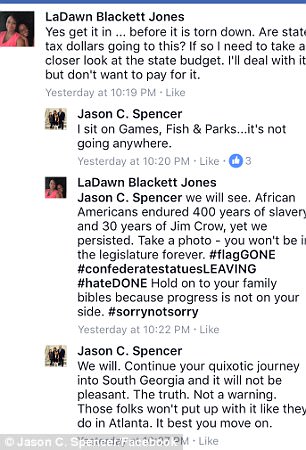 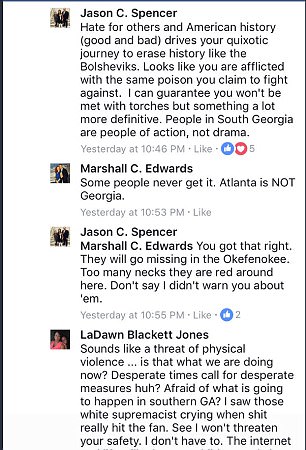 Jones responded to Spencer on his Facebook post and suggested he get his visit and keepsake photos taken before the memorial of Davis is ‘town down’. That resulted into a heated exchange between the pair in which he warned her she might go missing

Another Facebook user interrupted their heated exchange and wrote that ‘some people’ will never get it.

‘Atlanta is NOT Georgia,’ the man wrote.

Spencer replied, ‘You got that right. They will go missing in the Okenfenokee [swamp]. Too many necks they are red around here. Don’t say I didn’t warn you about them.’

The exchange, which has been removed from Facebook, concluded with Jones who wrote: ‘[Is] that what we are doing now? Desperate times call for desperate measures huh? Afraid of what is going to happen in southern [Georgia]?’

The exchange between Spencer and Jones has been removed from Facebook.

Spencer, who serves in District 180, which includes Camden, Charlton, and Ware counties, told the Atlanta Journal-Constitution on Wednesday that his post was not meant to be a threat, but a warning. 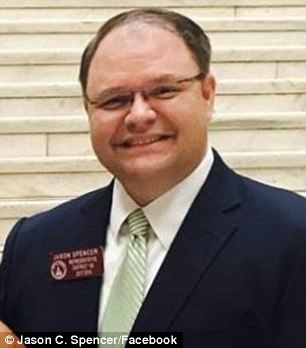 ‘She is from Atlanta — and the rest of Georgia sees this issue very differently,’ Spencer told the newspaper.

‘Just trying to keep her safe if she decided to come down and raise hell about the memorial in the back yards of folks who will see this as an unwelcome aggression from the left.’

Jones told the newspaper that her relationship with Spencer was ‘unique’ while she served in the state legislature from 2012-2016.

‘If it were anybody other than Jason Spencer, then I would be alarmed,’ she told the Atlanta Journal-Constitution.

‘But we had a unique relationship in the Georgia Legislature. If that had come from anybody else, I’d take it as a serious threat.’

Spencer, who was elected in 2010, eventually issued a formal statement about their exchange on Facebook and said: ‘I regret that my choice of words in warning LaDawn about the possibility of violence has been misinterpreted as a threat against her, or anyone else who would like to see historic monuments to the Confederacy removed.

‘I was trying to warn her that there really are people who would harm others over the issue. In light of the recent tragic murder of a woman in Charlottesville, I believe that a certain degree of caution is necessary. I still do.’ 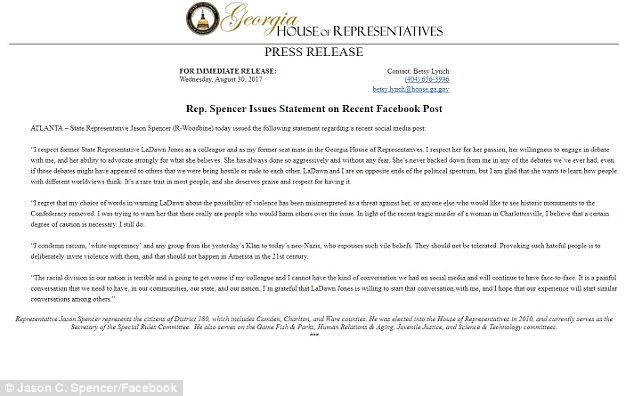 Spencer, who was elected in 2010, eventually issued a formal statement (above) about their exchange