Party officials made the comment in a reply to a BBC News report revealing the Taliban is ‘broke.’

‘Sign of the times: hearing the Taliban is in the market for a lobbyist in DC, offering a lucrative contract. The narrative around their financial situation, is that they’re broke,’ BBC reporter Suzanne Kianpour wrote on Twitter.

To which the Arlington County GOP Twitter handle replied: ‘Well, if @AOC or @Ilhan retire from Congress, there’s a revolving door opportunity for them.’

The divisive tweet only got five ‘Likes’ but numerous angry responses.

‘they’d probably prefer a rep without principles like… oh, i dunno, pick any GOP congressperson,’ one Twitter user said.

Another person posted a photo of Trump Secretary of State Mike Pompeo in a room with Taliban officials, writing: ‘@mikepompeo already has that job.’

The comment was referencing a peace deal President Trump brokered with the Taliban that excluded the Afghan government and secured a military withdrawal deadline of May 1.

But the Arlington Republicans dug their heels in. 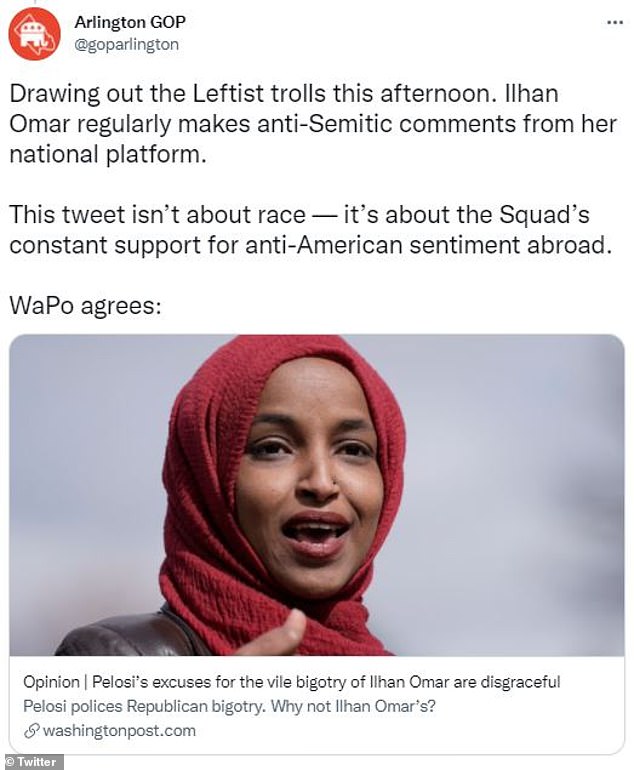 ‘Drawing out the Leftist trolls this afternoon. Ilhan Omar regularly makes anti-Semitic comments from her national platform,’ they wrote later that day.

‘This tweet isn’t about race — it’s about the Squad’s constant support for anti-American sentiment abroad.’

The group goes on to share a Washington Post opinion piece titled ‘Pelosi’s excuses for the vile bigotry of Ilhan Omar are disgraceful.’

A Twitter user replying to that post pointed out that the story was written by a ‘former Republican speech writer.’

And another person invoked Pompeo, adding, ‘Where were you when your pres and his cabinet was cozying up to the taliban? Remember the picture of the Secretary of State? You should be offering him that revolving door!’ 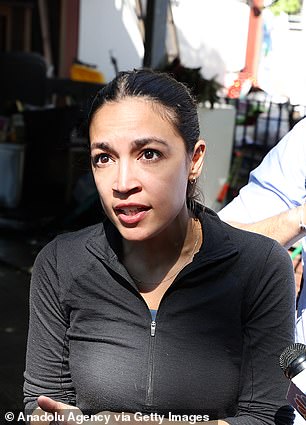 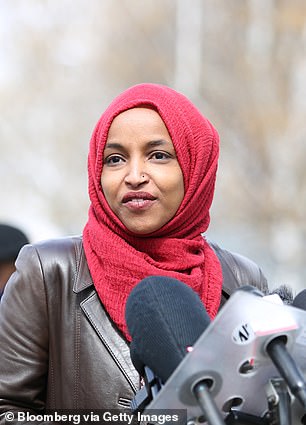 Both Ocasio-Cortez and Omar had praised Biden’s withdrawal from Afghanistan, which left thousands of Afghan allies and dozens of American citizens stranded under Taliban rule.

‘The level of evacuation that his administration has been able to undertake is really inspiring and there’s important work that’s getting done,’ Omar said on MSNBC in late August as the chaotic withdrawal was nearing its end.

On Twitter in early September, Ocasio-Cortez praised Biden’s ‘courageous decision to leave Afghanistan when no other president would.’

But Minnesota lawmaker Omar has faced criticism in the past for her comments on the Taliban – like when she compared the insurgent group to the United States and Israel. 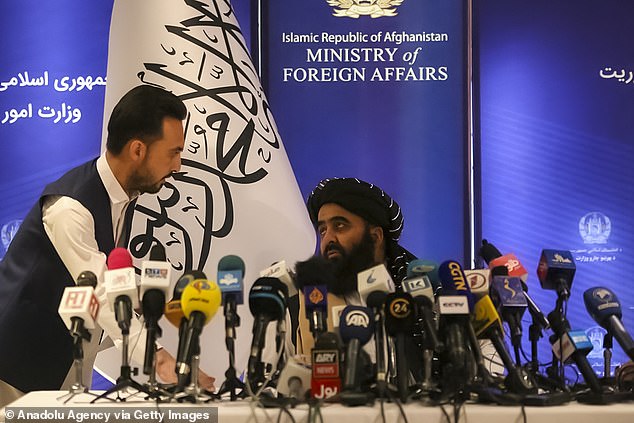 The Arlington GOP’s comments were in response to a report that the Taliban is ‘broke’ and looking for a Washington, DC lobbyist 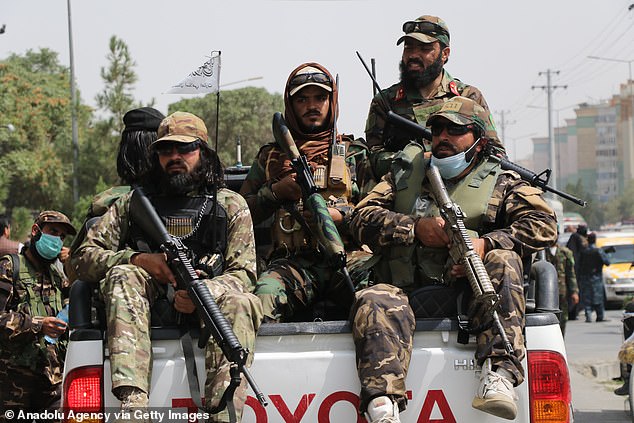 Taliban patrol the streets in Kabul, Afghanistan on September 11, 2021

‘We have seen unthinkable atrocities committed by the US, Hamas, Israel, Afghanistan, and the Taliban,’ Omar tweeted in June.

Her words were used against her in an attack ad by the American Israel Public Affairs Committee (AIPAC) in August.

‘For Ilhan Omar, there is no difference between America and the Taliban. Between Israel and Hamas. Between democracies and terrorism.’

‘When Israel targets Hamas, Rep. Omar calls it an ‘act of terrorism,’ another of their ads states.

Omar’s spokesperson Jeremy Slevin lambasted the ad on Twitter, writing that the ‘language AIPAC uses in paid ads to smear and vilify [Omar] is virtually identical to the language used in death threats she gets.’

Slevin accused AIPAC of ‘putting Rep. Omar’s life at risk’ with their advertisements.