GOP rep who made claims about estate tax omitted info

A Republican lawmaker who claimed that the estate tax imposed on her family after her father died in a farming accident left them in debt may not have been entirely truthful, according to documents whose contents were reported on Thursday.

Kristi Noem, a Tea Party Republican who came into office in 2010 as a representative from South Dakota, neglected to mention that after her dad died in 1994, her mother received a life insurance payout in excess of $1million.

Tax experts quoted by Huffington Post estimated that Noem’s family probably owed around $169,000 in estate tax after her father, Ron Arnold, died in a farming accident.

‘We had a tough choice: sell off a portion of our family farm or face a decade in debt,’ Noem, who is now running for governor of South Dakota, wrote in a Fox News op-ed last month.

‘We took a decade in debt and struggled to keep our heads above water.’

But Noem may also not have been aware that if her father received sound financial advice, he would not have paid any tax at all.

That’s because Arnold left an outdated will that failed to take advantage of a marital deduction that would have allowed him to leave his entire estate to his wife.

Had he done that, the IRS would not have been able to touch one penny. 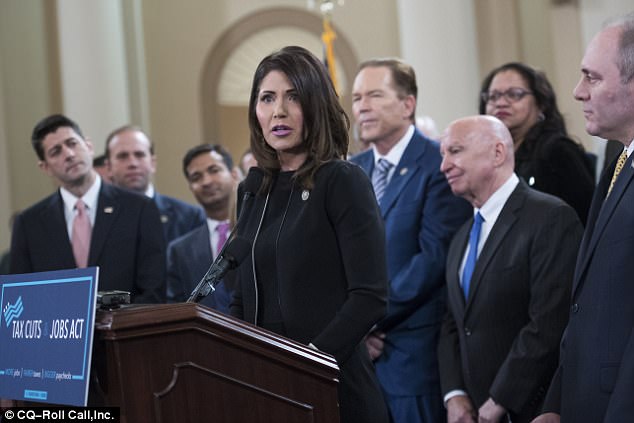 She has long claimed that the estate tax imposed on her family after her father died in a farming accident left them in debt. She is seen above at a news conference on Capitol Hill on November 2

Documents show that the entire estate, including land, machinery, livestock, and other property, was worth $4.5million. When subtracting debts and other deductions, the taxable estate came to $1million.

In the 1990s, the estate tax had a graduated rate schedule. That means for a taxable estate worth $1million, the individuals who inherit the property would be on the hook for $168,538 in tax.

By law, Arnold’s family could have deferred paying the tax or paid it off in installments over a period of 10 years at an interest rate that was lower than any lender.

Because half of Arnold’s adjusted gross estate related to the farm and the other half came from his life insurance policies, the estate could have paid the IRS $84,000 in installments over a decade.

Noem has refused to say whether the estate took advantage of the option to pay the tax in installments, which tax experts say would have been the wise choice.

Yet in her public appearances, speeches, and writings, Noem does not mention the life insurance pay out.

Another inconsistency in Noem’s story relates to her claim that shortly after her father died, ‘we got a bill in the mail from the IRS that said we owed them money because we had a tragedy that happened to our family.’ 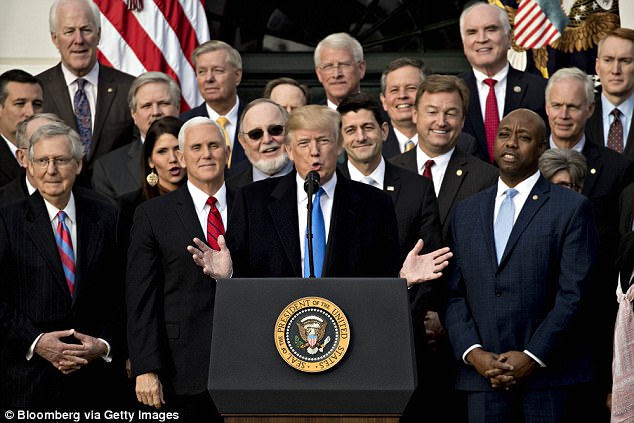 According to USA Today, the IRS does not send a bill to collect estate tax.

An estate tax can only be collected after someone files their taxes.

In 1994, families were given the option of filing a return within nine months in addition to a six-month extension.

By law, farms were also allowed to defer on payment of estate taxes for a period of up to five years.

In light of the provisions in the tax laws that would have been friendly to estates like those of Arnold, tax experts say it is highly unlikely that his family’s burden was as onerous as Noem has claimed.

Noem has said her family had to take out loans to pay the tax, yet she has not said which lender provided the loan.

Nor has she provided a copy of the IRS bill that she says she received shortly after her father died.

The newly passed tax reform legislation approved by Congress and signed by President Donald Trump raises the exemption for estate and gift taxes to $10 million from $5 million per person and indexes the new exemption level for inflation after 2011.

That means even fewer Americans would pay the estate tax, but it would stay on the books.