My Life, Our Times

Frank Field once compared him to Mrs Rochester, the madwoman in the attic. Peter Mandelson advised Tony Blair to place a sign on his desk with the inscription: ‘Remember: the Chancellor is mad.’

Welcome to the fiery, madcap world of Gordon Brown. In his book about the Blair/Brown years, the political commentator Andrew Rawnsley noted that, as Prime Minister, Brown would regularly fly off the handle, screaming ‘This won’t be forgotten!’ at anyone who crossed him, and, even more regularly: ‘Get out of the f***ing room!’

The cream upholstery of Gordon Brown’s prime ministerial Daimler was said to be flecked with black from where he had stabbed the back of the seat with his black marker pen. According to Alistair Darling, Tony Blair once likened dealing with Brown to ‘facing the dentist’s drill without an anaesthetic’. 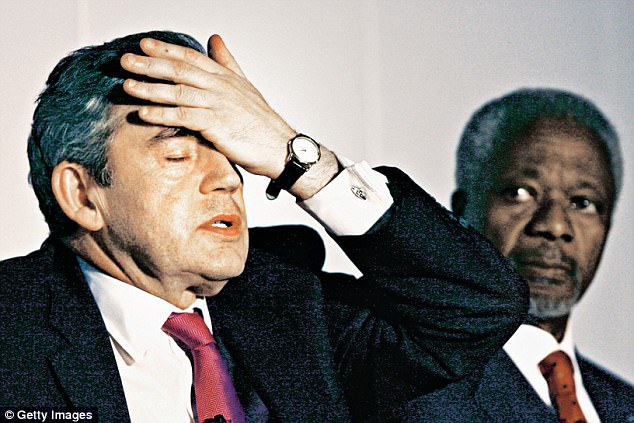 Frank Field once compared him to Mrs Rochester. Peter Mandelson advised Tony Blair to place a sign on his desk with the inscription: ‘Remember: the Chancellor is mad.’ 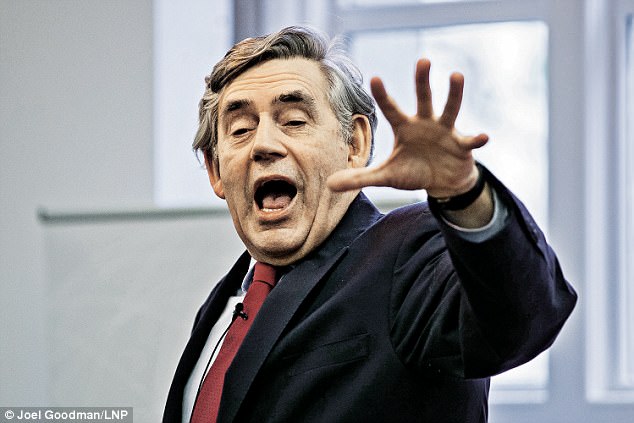 He assures his readers that if he ever wanted to supplant Tony Blair as Prime Minister, it was ‘not for the title but for the power to move forward progressive goals for the country’

Yet, reading his autobiography, you would imagine that he was an easy-going ‘steady-as-she-goes’ kind of guy: placid, hard-working, straightforward, a good-hearted soul ambitious not for himself but for his country. ‘I thought I could play my part in shaping change and decided it was the right time to stand for the Shadow Cabinet’ is typical of his way of chronicling the next step upwards.

He assures his readers that if he ever wanted to supplant Tony Blair as Prime Minister, it was ‘not for the title but for the power to move forward progressive goals for the country’.

But this is not how those in the know remember it. One of our shrewdest political biographers, John Campbell, believes that ‘The longer Blair stayed on, the more negative Brown became; so that by the time Blair finally went in 2007 he seemed to have forgotten why he had wanted to be Prime Minister in the first place. Once famed for his powerful intellect and assumed to have an alternative vision that he had been waiting ten years for the opportunity to pursue, he no longer seemed to know what he believed in or what to do with power now he had it.’

The most important thing to say about Gordon Brown’s autobiography is that it is quite extraordinarily dreary – and I say this as someone who has ploughed his way through such classics of the genre as Ministers Decide by Norman Fowler, Life In The Jungle by Michael Heseltine and Time And Chance by James Callaghan.

His writing style is as measured as a coffin. It lacks any sort of bounce or zip: given the choice between a vivid word and a dull word, Gordon will make a beeline for the dull. It is joyless and incurious. Most of it reads like an end-of-year report by a singularly cautious firm of accountants. ‘In my first Budget, I reduced the rate of corporation tax from 33 per cent to 31 per cent and by 2007 had brought it down to 28 per cent,’ reads a characteristic sentence. Obviously, as a former Chancellor you have to deal with such areas of finance, but surely not to the exclusion of anything more lively.

‘Writing about things past, and especially one’s own life, did not come easily to me,’ he confesses, somewhere towards the end. Well, you can say that again! This is an autobiography with all the heat and colour drained out of it, the prose equivalent of cold porridge. Pity his poor publisher when these 700 pages thudded through the letterbox. Where were the character sketches? Where were the anecdotes? 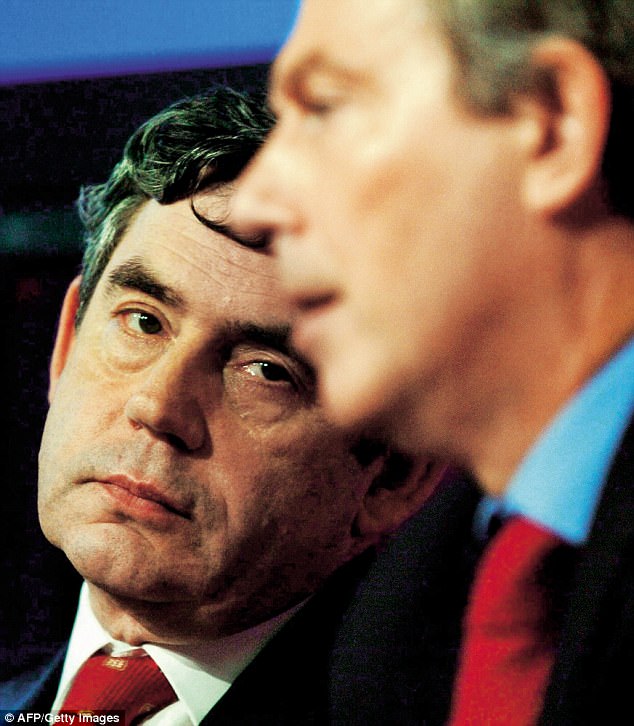 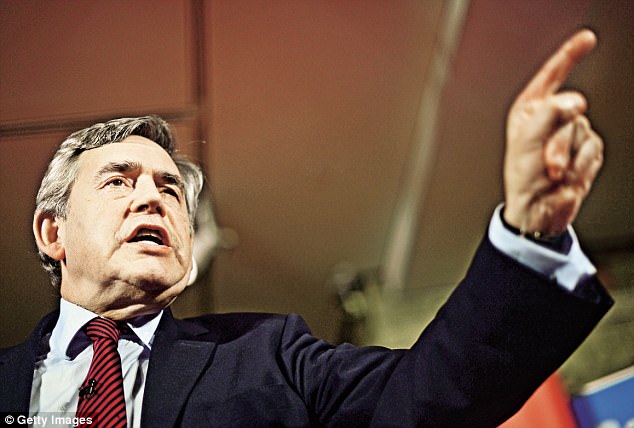 His writing style is as measured as a coffin. It lacks any sort of bounce or zip: given the choice between a vivid word and a dull word, Gordon will make a beeline for the dull

Other people come and go in these pages, but Gordon Brown never has anything of interest to say about them. So what was the Queen like, Gordon? ‘A gracious hostess.’ And what about Pope Benedict? ‘Sarah and I warmed to him as a person.’ He mentions Cherie Blair just once, in passing, when she is leaving Downing Street.

Even his wife Sarah is sketched in the haziest manner. He offers no account of their courtship, for instance: she simply appears on the scene when they are about to be married. Nor does he convey any idea of her character. More often than not, she is mentioned solely as the recipient of her husband’s great visions. ‘As I told Sarah, “If the choice is between doing what is popular and doing what is right, I will do what is right.” ’

One might have thought that becoming Prime Minister would have cured Brown of his burning ambition to become Prime Minister. But no: he is still picking away at the scabs of his old grudge against Tony Blair for denying him the ascendancy earlier.

In a rare excursion into anecdote, he describes the time he got stuck in the toilet of a house owned by Tony’s friend Nick Ryden during their discussions about who would stand for the Labour leadership.

‘After eventually finding the bathroom amidst the building works, I shut the door and it locked behind me. The door had been replaced but there was no handle on the inside. I was locked in the house of Tony’s close friend. For a few moments, I was literally out of the contest. Luckily, I had an early mobile phone – the size of a brick – and was eventually rescued from my imprisonment.’

A rare spark of comedy, you might think – but this story first appeared seven years ago in Tony Blair’s chatty memoirs, and in a much more lively fashion: ‘After an hour or so, Gordon got up to go to the loo. I waited downstairs. Five minutes passed. Then ten. Then 15. I was getting a bit alarmed. Suddenly the phone went. As it wasn’t my house, I left it. The answerphone clicked in, and Nick’s voice asked the caller to leave a message. Suddenly, out of the machine boomed another voice: “Tony, it’s Gordon here.” Wow, I was really freaked out. What the hell was going on? “I am upstairs, in the toilet,” he went on, “and I can’t get out.”

‘Gordon had spent a quarter of an hour on his mobile trying to track down Nick’s number. The soundproofing in the house meant that I never heard him. I went up to the loo. “Withdraw from the contest or I’m leaving you in there,” I said.’

Compare and contrast those two accounts: Blair’s is much more detailed, and much funnier. Brown leaves out the fact that he spent so much time ringing around for the right phone number, perhaps because it might make him look a touch pathetic. He also omits Blair’s little joke about leaving him in there unless he withdraws from the contest, presumably because he thinks it too light-hearted to pair with his own sense of grievance.

Elsewhere in Blair’s memoirs, he pithily summarises how the ravine between the two former friends grew after Blair became Prime Minister. ‘The root of the problem was that he thought I could be an empty vessel into which the liquid that was poured was manufactured and processed by him.’ But Brown can’t ever quite bring himself to acknowledge it, even though his over-riding sense of intellectual superiority to Blair is evident throughout.

Though far from being a Sunny Jim, Gordon Brown resembles the equally short-lived Labour Prime Minister Jim Callaghan in one important respect. Assessing his disastrous result in the 1979 General Election, when Margaret Thatcher swept to power, Callaghan somehow transformed defeat into a victory: ‘It demonstrated how much steady understanding and support existed for what we had tried to do.’

Gordon Brown seems to think his own, equally disastrous result in 2010 was similarly worth celebrating. ‘Perhaps I am alone in thinking that the most remarkable aspect of the General Election was that only ten million people voted for Tory austerity,’ he writes. I think it’s safe to say he’s not joking.