Gordon Ramsay enjoys a day on the beach with wife Tana and son, Oscar, one

Gordon Ramsay enjoyed a day at the beach in Cornwall on Saturday with his wife Tana and son Oscar, weeks after angering locals by spending lockdown at his second home on the coast.

The Michelin starred chef, 53, looked relaxed and happy as he strolled with his lookalike son, 16 months, on his shoulders, while Tana, 45, walked by his side.

The famously hot-tempered chef kept things simple for the family outing in a purple t-shirt and shorts, teamed with trainers.

Family day out: Gordon Ramsay enjoyed a scenic day out on a Cornwall beach with his wife Tana, 45, and their one-year-old son, Oscar, amid rising tensions with local residents

His wife also kept a low profile in black leggings, a camouflage grey jacket and an Adidas cap.

Oscar looked like the spitting image of his famous father and was positively adorable in a grey t-shirt and nautical white stripped shorts.

Ever the doting dad, father of five Gordon was seen swinging little Oscar before placing him on his shoulders as they took in the sea views.

The TV personality angered locals after relocating his family to their second home during the outbreak as the Government urged Britons not to travel from hotspots to the countryside. 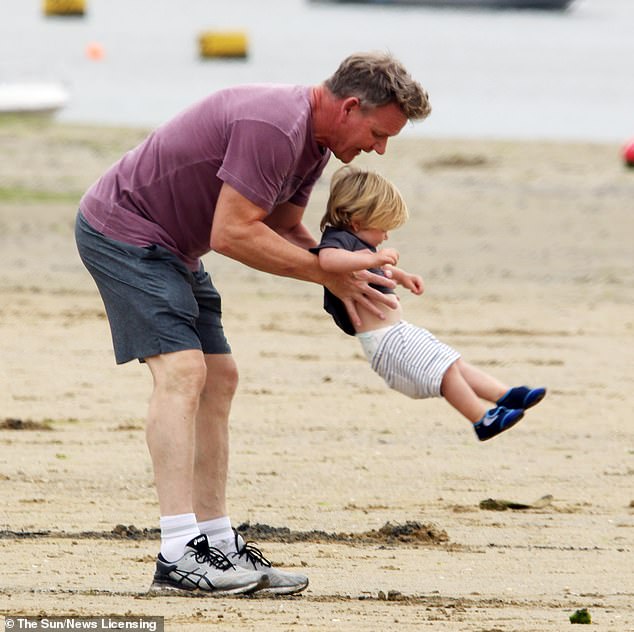 Cute: The Michelin starred chef, 53, looked relaxed and happy as he strolled with his lookalike son, one

Gordon moved into a beachside £4.4 million mansion in the village of Rock in Cornwall as he decided to escape from London at the start of the pandemic.

The star was spotted a number of times taking long excursions when outings were still limited to an hour a day including a beachside stroll with his entire family.

The fiery chef was accompanied by wife Tana and three of their five children – Jack, 20, Matilda, 18, and Oscar – during a brisk walk across the sand.

The Hell’s Kitchen star also landed in hot water with the local coastguard, who are said to have issued an official warning to him over his apparent flouting of lockdown guidelines. 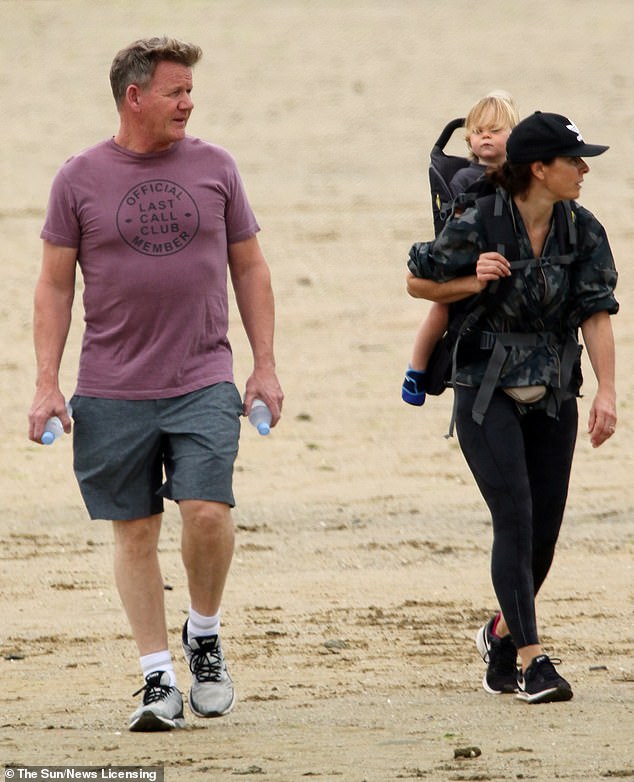 Casual look: His wife also kept a low profile in black leggings, a camouflage grey jacket and an Adidas cap

Sources indicated that Gordon was seen in Rock, Fowey, Port Isaac and Newquay – some distance from his £4 million home in Trebetherick.

The warning was particularly troubling because Ramsay was the face of a ‘Stayhome’ initiative on YouTube which he has been plugging on his ten-minute cookery shows, filmed in ‘isolation’ in his Cornwall kitchen.

Moreover, the TV personality hit yet another stumbling block when he was forced deny ‘almost causing an accident’ after a resident accused him of jumping a red light while on a 26.2-mile bike ride.

Whilst the UK was in heavy lockdown to slow the spread of COVID-19, the government advice was to ‘stay local and use open spaces near to your home where possible.’ 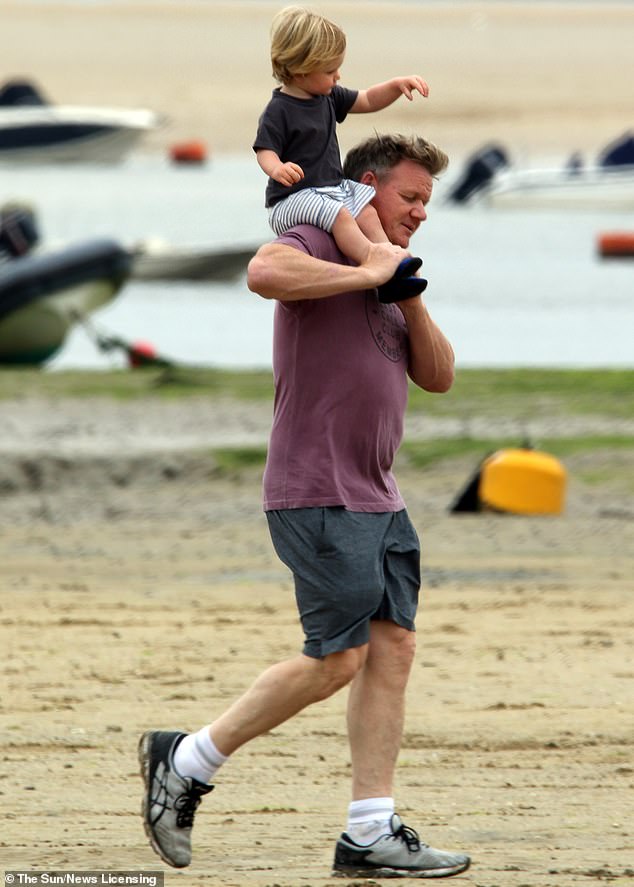 Revenge: In a thinly-disguised dig at locals, Gordon went above and beyond to thank a neighbour who delivered him asparagus and said ‘that’s what I call love thy neighbour, see?’

While people with second homes are not allowed to travel back and forth, choosing one home and sitting out the lockdown in it was not against official advice.

A friend of the family told MailOnline in May: ‘The family see Cornwall as their family home when the kids are back from uni and Gordon back from filming around the world it’s where they spend all their family time together.

‘They’ve been spending time there for 10 years and Jack actually lives in the house there full time too. Most of their neighbours are so welcoming and they love being part of the community.

‘They’ve been following the government advice along with the rest of the country since they arrived on March 20th and the campaign against them is hurtful and unnecessary at a time when we should all be coming together and supporting each other.’ 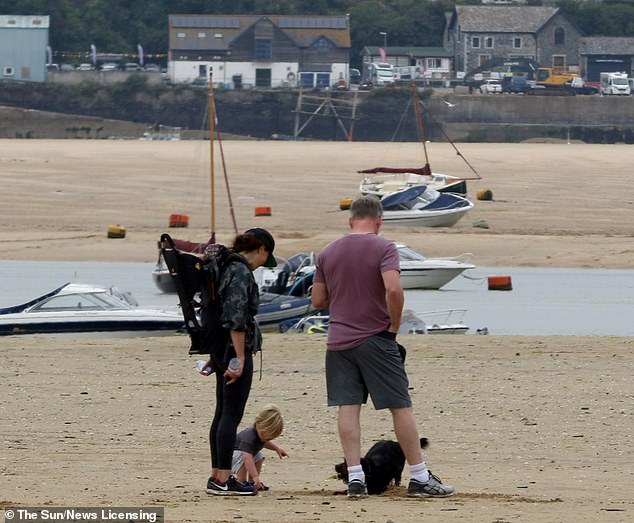 Backlash: The TV personality angered locals after relocating his family to their second home during the outbreak as the Government urged Britons not to travel from hotspots to the countryside 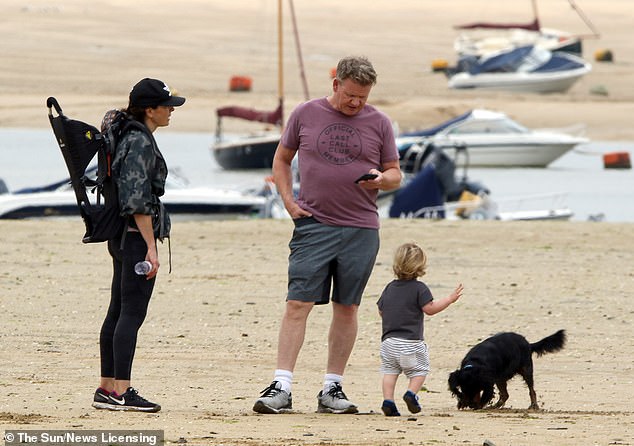 Chat: The couple looked relaxed and happy as they relaxed in Rock, Cornwall

In July it was claimed Gordon is set to endure months of loud construction work on the doorstep of his luxury Cornish holiday property, as neighbours revamp their homes.

More than half a dozen of the chef’s neighbours are said to have filed applications to extend their homes within yards of his £4.4million property.

According to The Sun, Gordon – who has fallen afoul of neighbours in the past with his own construction work – will live around residents extending and overhauling their properties, while one guest house will reportedly be completely rebuilt.

In addition to the construction work, the Hell’s Kitchen star is finally set for new neighbours as the £1.85 million home alongside his has received an offer.

The lavish property – named Tregye – was put on the market in April 2019, and is in the heart of the seaside village of Rock in Cornwall and boasts four bedrooms. 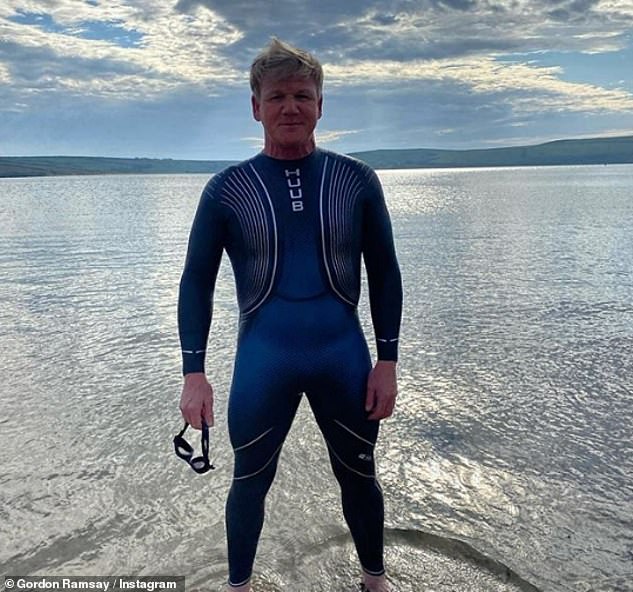 Lockdown workouts: Gordon has been keeping his followers updated with his lockdown exercise sessions, amid the drama