The government could borrow money to invest in hundreds of thousands of new homes, a Cabinet minister said today.

Communities Secretary Sajid Javid said ministers should take advantage of record low interest rates to deal with the housing crisis, which is ‘the biggest barrier to social progress in our country today’.

Asked if Chancellor Philip Hammond was on board with the idea, Mr Javid said: ‘Let’s wait and see what happens in the Budget.’ 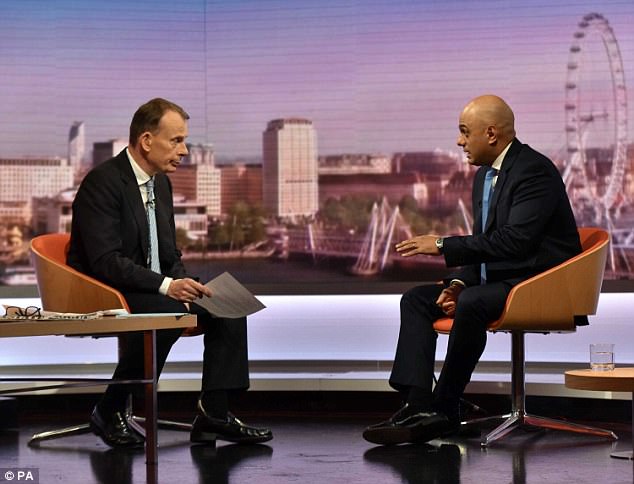 The comments will raise expectations that the Tories are set to step up action on housing, seen as a key issue for the younger generation who deserted them at the election.

Asked whether there would be a new housing fund to build homes, Mr Javid told the BBC’s Andrew Marr show: ‘We are looking at new investments and there will be announcements.

‘I’m sure at the Budget, we’ll be covering housing but what I want to do is make sure that we’re using everything we have available to deal with this housing crisis.

‘And where that means, so for example, that we can sensibly – you borrow more to invest in the infrastructure that leads to more housing – take advantage of some of the record low interest rates that we have, I think we should absolutely be considering that.’

He added: ‘I would make a distinction between the deficit which needs to come down and that’s vitally important for our economic credibility and we’ve seen some excellent progress, some very good news on that just this week.

‘But investing for the future, taking advantage of record low interest rates, can be the right thing if done sensibly and that can help not just with the housing itself but one of the big issues is infrastructure investment that is needed alongside the housing.’

Mr Javid also suggested the Government would not relax protections for the green belt.

‘I don’t believe that we need to focus on the green belt here, there is lots of brownfield land, and brownfield first has been a policy of ours for a while,’ he said.

‘There is a lot more that can be done, density is a big issue – if you look at the density of London for example, it won’t surprise your viewers to learn that London has some of the highest levels of demand in the country, the density in London is a lot lower than many other cities, Paris, Berlin, compared to most cities around Europe, so that’s one area where you can expand more.’

At the Conservative Party conference this month, Theresa May pledged to ‘dedicate’ her premiership to fixing Britain’s housing crisis as she announced an extra £2 billion for affordable housing.

An extra 25,000 social homes could be built under the plans outlined by the Prime Minister but her promise was overshadowed by her mishap-strewn conference speech and subsequent Tory infighting, and the party remains under pressure to do more.

Environment Secretary Michael Gove appeared to back Mr Javid’s suggestions, tweeting that he was ‘v impressive on #Marr’.