Government plans to ban Troubles-related prosecutions will also halt investigations into mainland IRA attacks such as the Birmingham pub bombings, The Mail on Sunday can reveal.

Families of victims have told of their fury after learning the plans would stretch to include IRA attacks on the mainland.

Terrorist attacks on the UK mainland were not covered as part of the prisoners’ early release scheme in the 1998 Good Friday peace agreement.

But the Mail on Sunday has learned the government is planning to extend an effective ban on prosecutions to include IRA atrocities carried out in Britain.

Asked whether a proposed ‘statute of limitations’ would apply to the 1974 Birmingham pub bombings and other terrorist attacks on the mainland, a government source confirmed: ‘It would be all Troubles-related deaths.’

The Mail has learned the government is planning to extend an effective ban on prosecutions on Troubles-related incidents to include IRA atrocities carried out in Britain, such as the 1974 Birmingham pub bombings (pictured)

The proposals have been criticised as an effective ‘amnesty’ with a fierce backlash from victims’ groups and those on both sides of the divide in Northern Ireland.

Relatives of those killed by the IRA have campaigned for attacks, including the Birmingham pub bombings, to be re-investigated by authorities.

In 2019 an inquest ruled the 21 victims of bombs at the Mulberry Bush and Tavern in the Town pubs in Birmingham were unlawfully killed.

It did not establish who was responsible but in November a 65-year-old man from Belfast was arrested in connection with the investigation and later released.

Julie Hambleton, whose 18-year-old sister Maxine died in the Birmingham bombings, said of the government plans: ‘It’s a disgrace. Murder is murder and these people should be brought to justice. 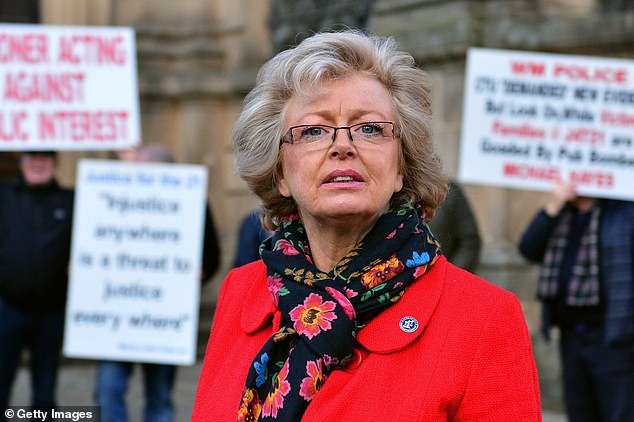 Julie Hambleton, whose 18-year-old sister Maxine died in the Birmingham bombings, said of the government plans: ‘It’s a disgrace. Murder is murder and these people should be brought to justice’

‘We’ve had 47 years and waiting and here they are kicking us again to give another amnesty to terrorists.

‘Why does the government want to allow despicable murderers to walk free?’

It is also understood the government is still considering whether the plans could bring a stop to cases currently in the courts.

Officials are understood to be wary of discussing the move as negotiations are still at a delicate stage.

The development could mean the end of trials into veterans charged over shootings during the Troubles and former IRA man John Downey who is set to face trial for the murder of two Ulster Defence Regiment volunteers in a bomb attack in 1972.

Last week the trial of two paratrooper veterans, both in their 70s, over the fatal shooting of IRA commander Joe McCann collapsed after a judge ruled the evidence was inadmissible.

Another four Northern Ireland veterans have been charged with offences including murder relating to shootings dating back to 1972. 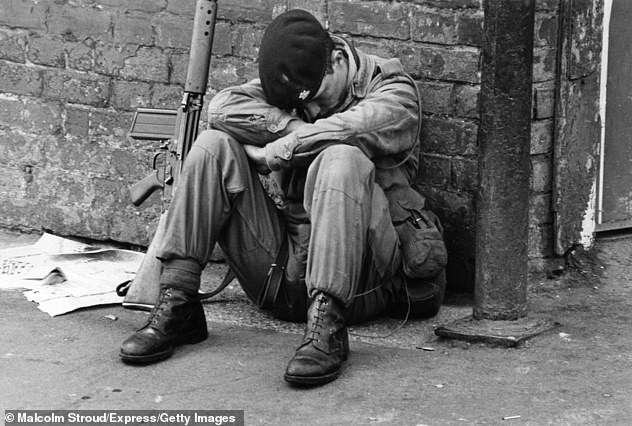 It comes after news at least 16 British Army veterans facing charges over shootings during the Troubles will have their cases reviewed following the collapse of a landmark trial. Pictured: A British soldier sits on patrol in the Falls Road area of Belfast in July 1970

A further 12 are awaiting decisions on charges in relation to incidents almost 50 years ago.

Charlie Eames, a clergyman and former policeman whose uncle James Eames was allegedly killed by Mr Downey, said: ‘I’m disgusted by this.

‘How can you stop a case that is already in the courts? People should be brought justice where there is evidence.’

Former Veterans Minister Johnny Mercer, who marched with around 400 people in protest at the fresh investigations into former soldiers yesterday, has also criticised the proposals.

On Tuesday the Queen’s Speech announcement will merely repeat previous pledges to introduce legislation to ‘address the legacy of the Troubles’ as ‘no final legislative decisions have been made’.

But it is understood the current plans would establish a ‘truth and reconciliation’ process similar to that used in post-apartheid South Africa, where individuals can come forward to give evidence without fear of prosecution.

A government source said: ‘A statute of limitations is one of the things under consideration.

‘It would be a way to encourage greater disclosure of information for victims’ families and encourage meaningful efforts towards reconciliation.

‘There would not be the threat of prosecution hanging over people.

‘It could take 20 years to go over every one of the 3,500 Troubles-related deaths.

‘Twenty more years of Northern Ireland not being able to move on is not something anyone would want.’

However, lawyers for victims groups warned against a blanket ban on prosecutions and said it should only be granted to individuals who agree to give evidence to any inquiry.

Matthew Jury, of McCue & Partners, said: ‘If the government proceeds with this proposal, amnesties should only be given to those who actively and effectively engage in the truth and reconciliation process. They can’t be unconditional.’