A government office has failed to enforce social distancing among workers, a health and safety inspection has found.

Photos showing staff gathered close together around a desk at the Department for Work and Pensions in Leeds were taken by inspectors concerned about the office breaching regulations.

There have been two coronavirus cases among staff, with the Health and Safety Executive finding that management had failed to ensure social distancing was maintained.

Since the ruling, the DWP said it had taken ‘urgent action to rectify all issues identified’ at the Quarry House office.

The inspection came after a DWP whistleblower, who had previously been working from home, raised concerns about a lack of social distance in the office upon his return.

Photo showing staff at the DWP office in Leeds standing close together. The government department was found guilty of breaching social distancing rules

He, like the majority of the office workers, had been working from home, though a recruitment drive triggered by the rise in Universal Credit claimants amid the outbreak meant that hundreds of staff have still been in the building.

Upon returning to the office, the whistleblower said he was concerned for his health in the building, which also houses some parts of the NHS.

He told the BBC: ‘I hear stories about people congregating, not following outlaid guidance. In an office so big it is difficult to monitor 24/7.’

The HSE then received a report of ‘workplace concern’ which led to a subsequent office inspecting on August 27.

The report said: ‘You are failing to ensure, so far as is reasonably practicable, the health and safety of your employees/agency staff at work because you have not implemented necessary measures to prevent the spread of Covid-19.’

The HSE also said that the DWP risk assessing for the office only being half full was ‘ambitious and unrealistic’,  leading to a risk of ‘congestion’.

Two emails are thought to have recently been sent to staff saying two people had tested positive, with both sent home from the affected floors and deep cleans carried out.

The HSE also confirmed that following the visit an official letter was sent to the DWP.

In it, the DWP was told a fee would need to be paid because of ‘material breaches’ of health and safety law.

It was given a deadline of Tuesday September 15 to confirm action had been taken to remedy the issues highlighted in the report. 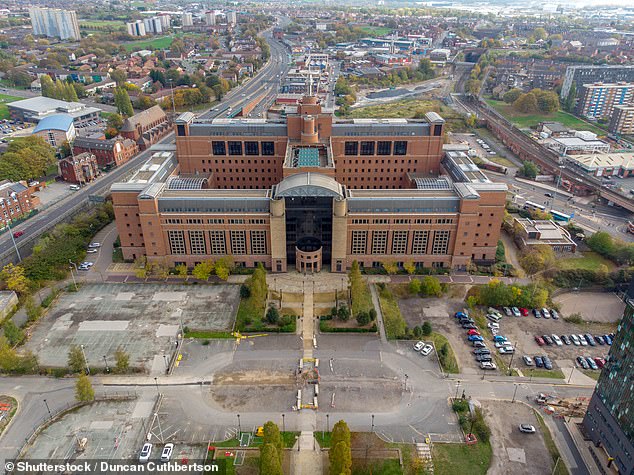 Upon returning to the office, a whistleblower said he was concerned for his health in the building, which also houses some parts of the NHS

Charles Law, industrial officer with the PCS union, said: ‘It’s extremely worrying for our members who work for the department, especially if they’re expected to stop being at home and come into the workplace.

‘It’s shocking that the HSE would do such a damning report on a flagship DWP office and we’re extremely concerned for the safety of our members.’

In a statement, a DWP spokesperson said: ‘We take the health and safety of staff extremely seriously and have implemented Covid-secure measures across our sites to ensure they comply with government guidelines.

‘We have taken urgent action to rectify all issues identified by the HSE.’