Governor says people ‘foolish’ for not wearing masks in meeting

Utah Governor Gary Herbert said people crowding into a local public meeting to push for an exception to mask requirements in schools – without wearing masks of their own – was ‘foolish’ and suggested an ‘almost mob mentality’ on the issue.

Local officials in Utah County abruptly canceled the meeting Wednesday after parents gathered en masse to discuss their objections to their children wearing face masks with some claiming they will ‘rewire children’s brains’ and ‘teach them to fear the world’.

Images taken at the meeting showed dozens of parents sitting right next to each other, not engaging in any form of social distancing meant to help prevent the soread of coronavirus. 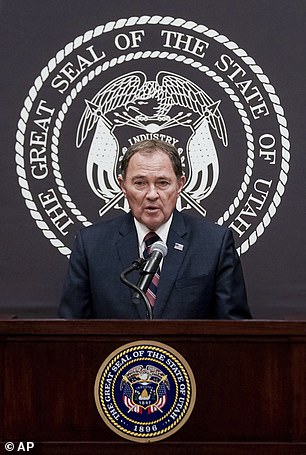 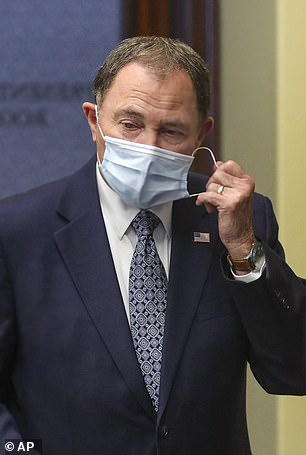 ‘I think the experts will tell us that’s kind of a foolish action,’ Herbert, a Republican, said Thursday of the parents opting not to wear masks while in such close proximity. ‘People get caught up in almost a mob mentality … there´s a better way to dialog with leadership.’

Utah, like many states, has been experiencing a surge of coronavirus cases in recent months. Another 413 cases and seven deaths were reported Wednesday, while a top state hospital chief issuing a grave warning that the outbreak is ‘unsustainable’.

Herbert announced last week that all students, faculty, staff and visitors in all K-12 schools and on school buses must now wear masks in efforts to tackle the mounting health crisis.

Health experts say masks can prevent the spread of the disease by catching respiratory droplets that contain the virus when people exhale or cough. The face coverings are promoted as a key tool in allowing the resumption of economic activity and students’ return to schools. 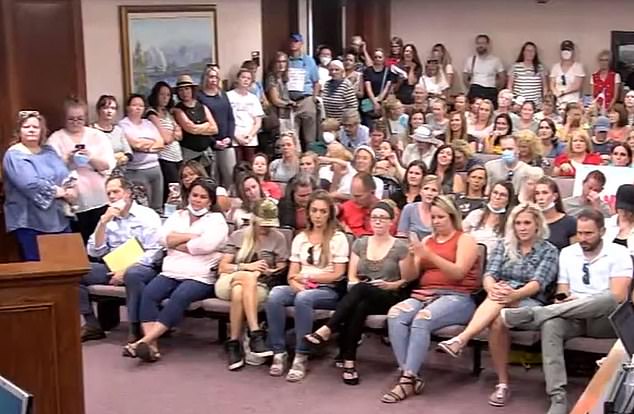 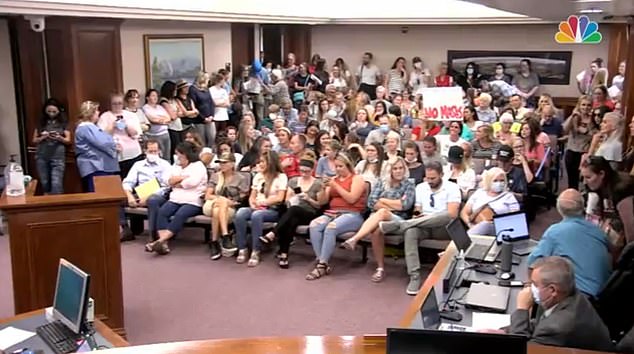 The meeting that the parents attended had been meant to include a planned to vote on whether to ask for a partial exemption from Herbert’s statewide mask mandate for schools.

Utah County Commissioner Tanner Ainge was met with jeers from the crowd of people who poured into the meeting room in Provo, Utah, as he blasted them for disregarding coronavirus safety precautions and called off the meeting as the vast majority of attendees refused to wear masks and ignored social distancing markers on the floor.

‘This is the exact opposite of what we need to be doing,’ Ainge told attendees.

Loud boos and jeers rose up to meet him as he added: ‘This gathering violates current health recommendations.’

The commissioner filed a motion to adjourn the meeting until a later date because of attendees flouting the rules.

The motion was approved on a 2-to-1 vote, with commissioner Bill Lee who organized the meeting dissenting.

Swarms of attendees – and the two commissioners besides Ainge – stayed in the meeting room for two hours despite its official adjournment to voice their outrage at the mask policy for schoolchildren.

One mom showed her disregard for masks by spitting her gum out into one as she took the podium and slammed them as ‘garbage’, according to The Salt Lake Tribune.

Another mother said she believes wearing a mask will ‘rewire’ her son’s brain.

‘It’s going to rewire their brains,’ she said. 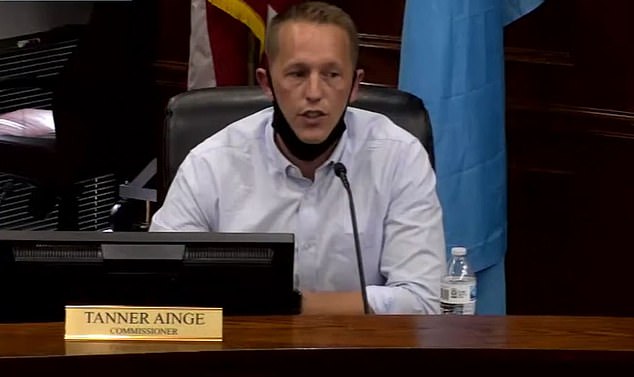 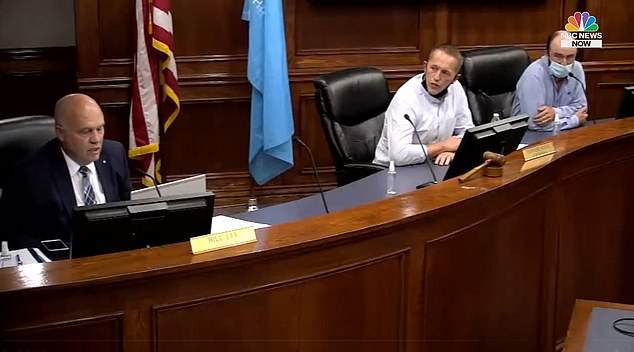 The motion to cancel the meeting was approved on a 2-to-1 vote, with commissioner Bill Lee (left) who organized the meeting dissenting

‘I’m especially not going to send my son back to have his mind broken.’

Meanwhile a grandmother of five dismissed the pandemic that has killed more than 137,000 Americans as a ‘hoax’.

‘We are perpetuating a lie. COVID is a hoax. It’s a lie. It’s a political stunt,’ she said.

Other theories were floated including that children will learn to fear the world and will not be properly socialized if their faces are covered and that masks cut down on a person’s oxygen, the Tribune reported.

One father even threatened to pull his children out of school altogether in the fall if the governor does not lift the mask mandate.

Around 150 people also gathered at an anti-mask protest ahead of the meeting, where they held up signs reading ‘Don’t smother the children’ and ‘Let kids be kids.’

The outrage over wearing masks comes as cases and hospitalizations are surging across the state and fears grow that healthcare systems will buckle under the demand.

Utah has reported 30,891 confirmed cases of coronavirus and 233 deaths.

Hospitalizations in the state reached 204 Wednesday, up from 176 Tuesday and just short of its all-time high of 209 on Sunday

Two-thirds of the state’s ICU beds are already full and Dr. Thomas Miller, Chief Medical Officer at University of Utah Hospital, has warned that the surge in cases in the state is ‘unsustainable’.

More than 137,000 Americans have been killed by the pandemic and almost 3.5 million have been infected.