A leading cosmetic doctor has criticised the government’s ‘Wild West’ approach to non-surgical treatments such as Botox and fillers – after a former Love Island star ‘qualified’ to offer them after taking a short course.

GP and aesthetic doctor Dr Shirin Lakhani, who runs her own practice in Kent, said she was shocked to see ex Love Islander Rykard Jenkins, 28, who appeared in the 2017 version of the reality show, offering to treat clients after completing training with aesthetic training academy, Cosmetic Couture.

On Rykard’s Instagram page, he’s been sharing details of his training which, he says, has included taking exams and offering treatments on patients under the guidance of professionals.

Rykard Jenkins, left, who appeared on the 2017 series of Love Island has been sharing with his 355,000 followers on Instagram his latest venture, training to be a aesthetic practitioner 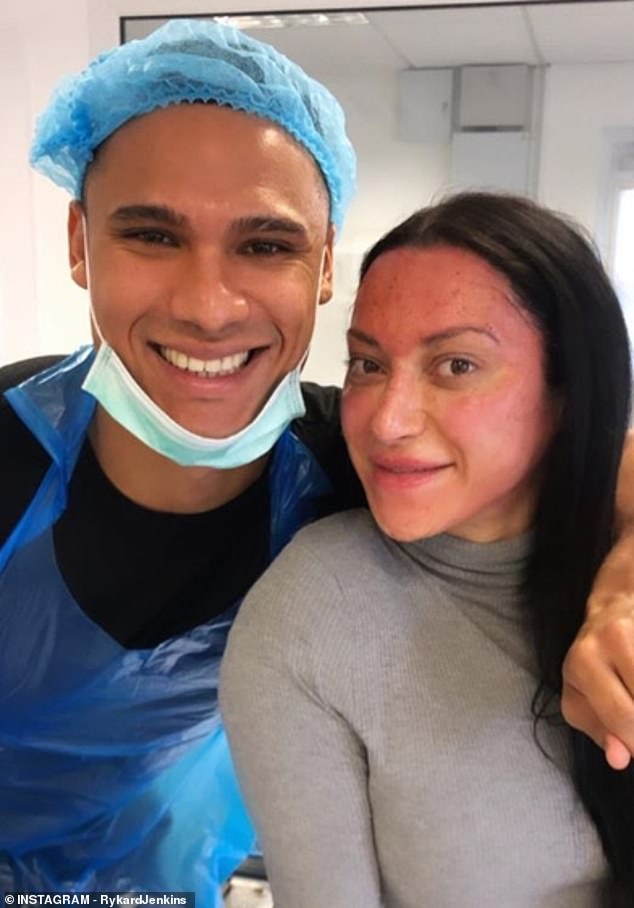 However, one medically-trained doctor has criticised the fact that Jenkins is now able to offer treatments such as Botox and micro-needling after attending a short training course 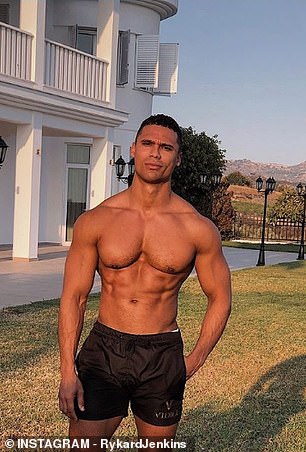 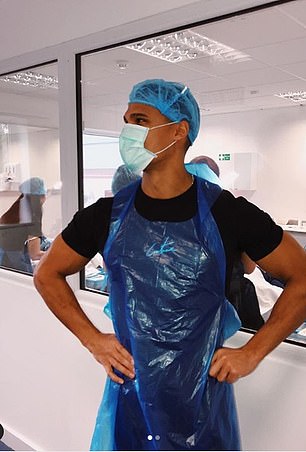 The Love Islander has been sharing his experiences as a non medic training to offer non-surgical procedures such as Botox and fillers. The star pictured in scrubs as he prepares to administer a cosmetic treatment 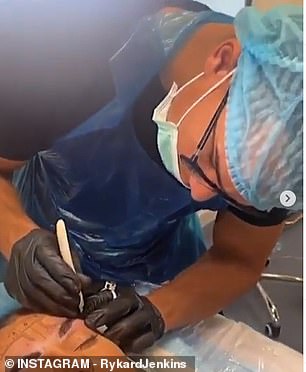 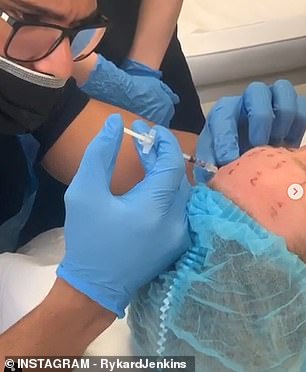 Rykard seen carrying out microblading – essentially tattooing on the eyebrow area – on a client. And plunging a needle into the forehead of a lady having Botox

A video shows the reality star injecting a woman’s forehead and in another clip, Rykard is seen performing microblading – an eyebrow tattooing technique – on a client.

The 28-year-old said: ‘Sharron at Cosmetic Couture has given me the knowledge  and skill to go on my own and start enhancing brows with a “Natural look/result”. I actually cant wait to start Fleeking the nation.

He added: ‘I’m happy to say I’ll be taking bookings for all treatments and the first 30 bookings on each treatment will be at a model price.’

Cosmetic Couture offers courses for medics and non medics on popular aesthetic treatments, and says it has worked hard to raise industry standards. Training with the company lasts from around two and seven days depending on the course, and costs from around £1,500 to around £3,500.

Rykard, also a personal trainer, has since told his followers that he now intends to offer the treatments himself as a private practitioner.

However, Dr Lakhani told Femail that the fact an ordinary person with no medical training, can ‘qualify’ to carry out such procedures is ‘terrifying’.

She said: ‘It’s a terrifying development to see companies like this using celebrity endorsements on social media to advertise their courses and the ease of entry into this industry. 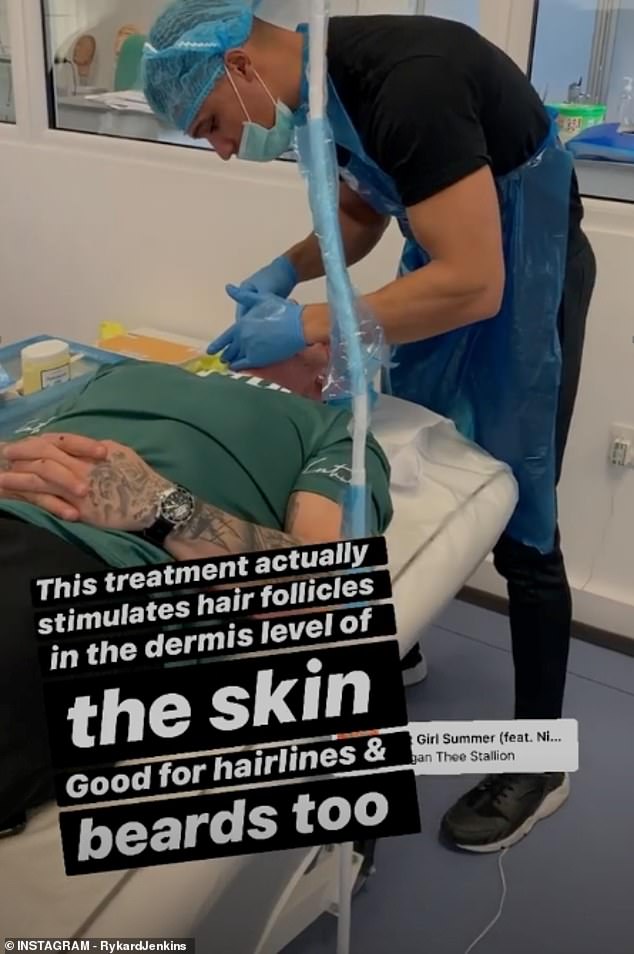 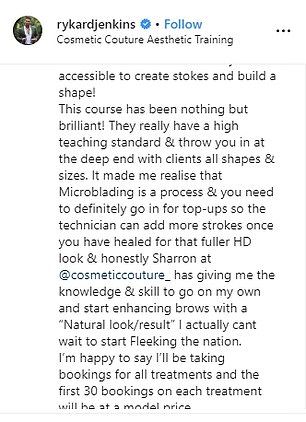 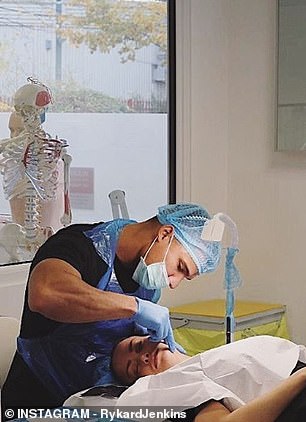 ‘Even though injectable filler treatments are considered ‘non-surgical’, they are invasive, medical treatments and as a result can cause a significant amount of damage to a patient. 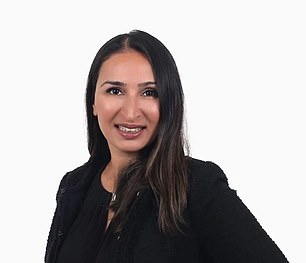 ‘If filler is placed incorrectly, nerve damage can be caused, paralysis of the wrong muscles, skin necrosis and even blindness.’

Earlier this year, the government launched a campaign to crack down on botched Botox and filler injections, which NHS doctors are often left to repair.

More than 600 people made official complaints about failed dermal fillers in 2017-18 alone, according to the campaign group Save Face.

Popularity among celebrities and reality TV stars has drived demand for the procedures but customers still have a limited understanding of their risks, say experts.

Dr Lakhani adds: ‘Every aspect of the facial anatomy is extremely complex and so it is vitally important to see a qualified medical professional.

‘In this digital age we’re seeing more and more people opt for cosmetic enhancements and, as such, we’re also seeing an increase in non-medics training to carry out these procedures.’

How to get safe lip fillers

1. As per NHS England advice ensure your practitioner is a registered medical professional

2. Ensure treatment is within a clean clinical environment such as a clinic

3. Check you practitioner had the appropriate insurance and is experienced at the procedure and treating complications

4. Always ensure you have a follow up appointment available to you as part of your treatment

5. Adhere to aftercare and ensure you have emergency contacts for your practitioner

The GP added that it’s just ‘not feasible to be able to train to the standard that is required in a matter of days or even weeks and I’m treating more and more complications on the back of this.’

She said the government hasn’t gone far enough in stamping out rogue practitioners, saying: ‘With the lack of regulation in the UK, anyone can pick up a syringe of filler with no qualifications, training or insurance.

‘Training courses catering to non-medics are springing up exponentially and the government’s lack of willingness to regulate what is becoming the Wild West in aesthetic treatments is putting patients in harm’s way.’

MailOnline has contacted Cosmetic Couture and Rykard Jenkins for comment.

Maxine Hopley, CEO of Cosmetic Couture, said: ‘This is typical of a doctor who has an aesthetic practice rather than working in the NHS trying to argue that non-medics can’t train in Botox and fillers – rubbish. This is about money and not safety.

‘We teach both medics and non-medics and have taught thousands of students over the past seven years. The doctor complaining is twisting it to make it sound like this is all online which is nonsense – I have done thousands more Botox and filler treatments than her and challenge her that I am way more qualified to teach this than her despite her medical degree.

‘She is just trying to promote her own clinic and make more money by denying others the right to practice something that is legal, safe and helping tens of thousands of people every day feel better about themselves.’