Grace Tame opens up on her abuser, drugs, anorexia and her side-eye at Scott Morrison in new book

Grace Tame has opened up about the sexual abuse she suffered at the hands of a ‘f***head’ sexual predator and wondered if he turned her into ‘a psychopath’.

Tame revealed the emotional damage done by her maths teacher Nicolaas Bester, who groomed then raped her at 15, in a wide-ranging interview ahead of the launch of her memoir.

Now 27, Tame, admits in the book she drank alcohol at school, spent her late teens experimenting with recreational drugs and was hospitalised twice for anorexia.

That included using cocaine and marijuana. She even worked on a weed farm. 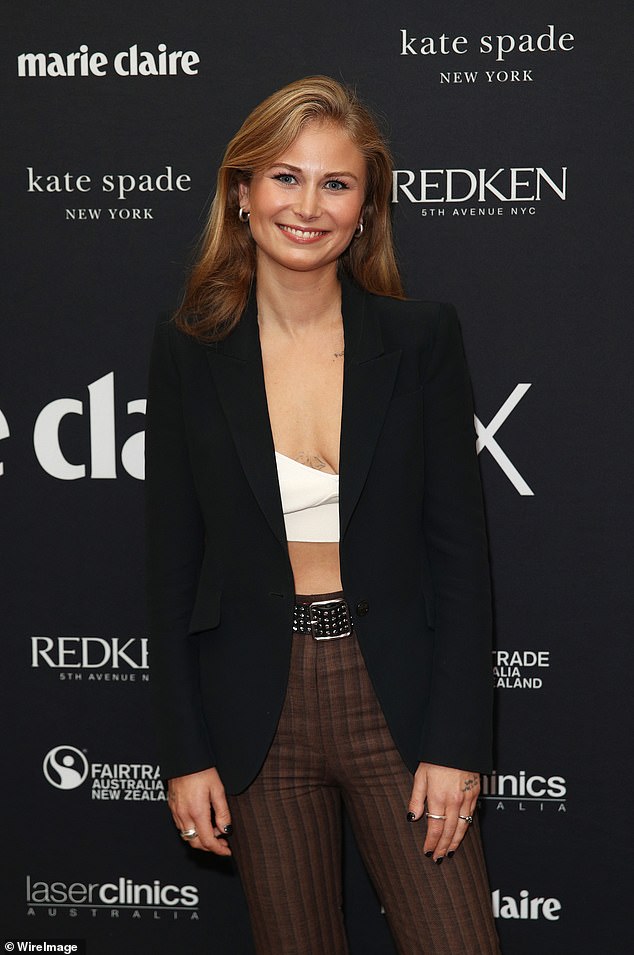 Tame revealed the emotional damage done by her her maths teacher Nicolaas Bester, who groomed then raped her at 15, in a wide-ranging interview ahead of the launch of her memoir

The horrific treatment she suffered at the hands of Bester was not the only sexual abuse she endured, Tame revealed in an interview with Nine newspapers ahead of the book hitting shelves.

Tame admits in the book she was sexually abused by an older child when she was just six years old.

After being groomed and raped by Bester, Tame turned to alcohol to cope, frustrated by being seen as a girl who had had ‘an affair’ with her teacher.

She also took solace in using cocaine and pot and defends her use of illegal substances.

While Tame concedes there is harm in glorifying drug use, she says there is more harm in ‘looking down’ on people at difficult points in their lives. 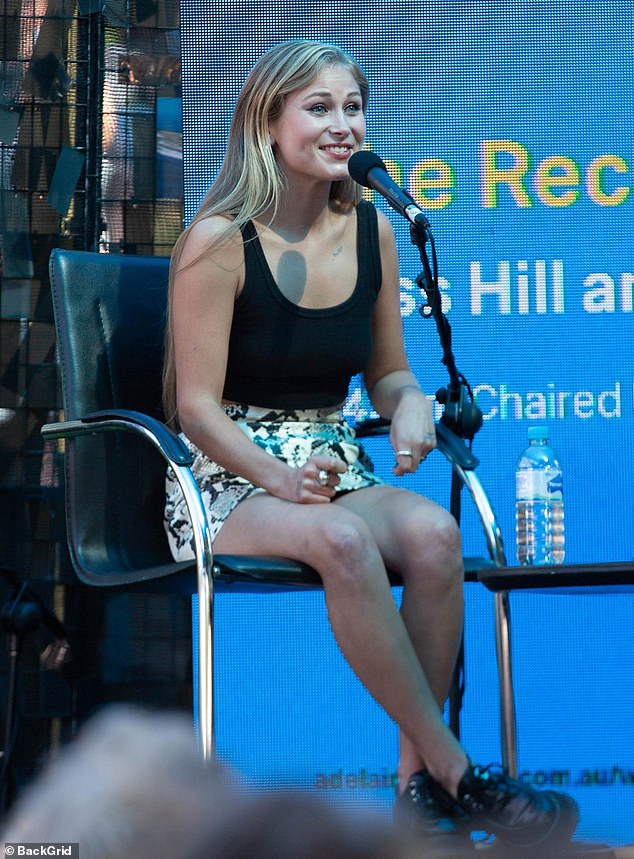 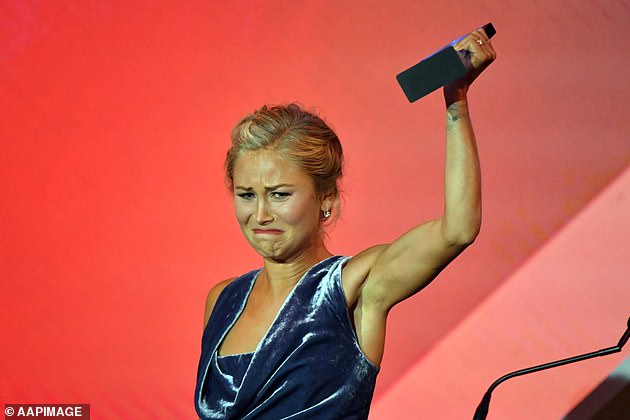 She adds that she ‘sincerely enjoyed’ being high at times.

But she added that she no longer takes drugs.

Among Tame’s most confronting confessions is that her sexual abuse left her having intense flashbacks when she had sex with a partner as an adult, which caused her to freeze.

Tame went on holiday to Santa Barbara in the US in 2017 then ‘ran away’ from Australia to the US when she was 18.

There she got married to a Hollywood child star, Spencer Breslin, in an Elvis-theme ceremony at a ranch outside of Los Angeles, but they were divorced within a year.

In the 352-page book, The Ninth Life of a Diamond Miner, Tame writes at length about how emotionally damaged she was by Bester’s abuse. 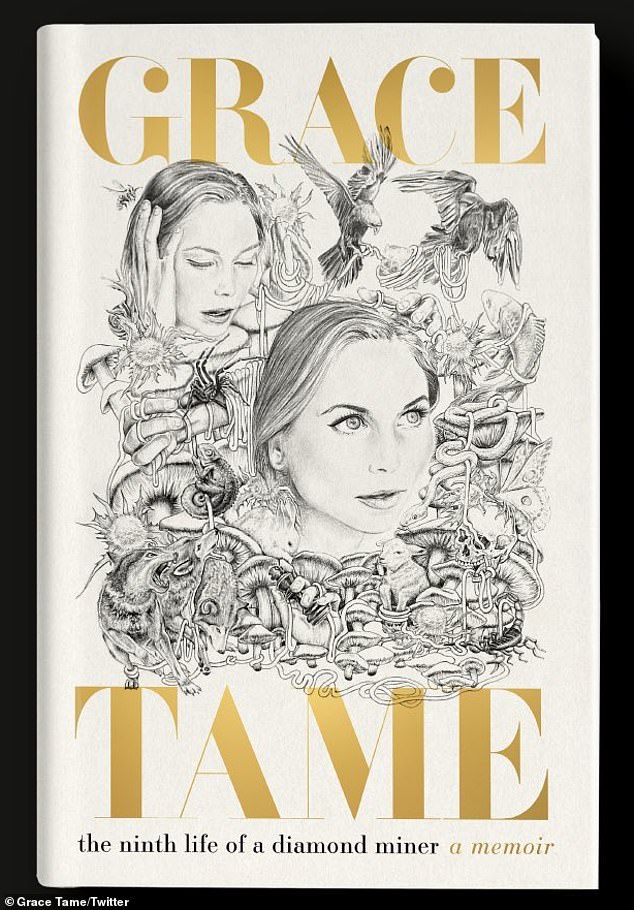 Former Australian of the Year Grace Tame has announced the release date of her autobiography: The Ninth life of a Diamond Miner (above) which features artwork drawn by Tame

‘I have wondered if, much like a passive smoker catches lung cancer, I have wondered, ‘Oh my god, am I a psychopath?’ That’s how effective these – excuse my English – these f—heads are, at making you feel like a bad person.’

She also admits that she has made mistakes after being thrust into the public eye when she was made the 2020 Australian of the Year.

But her famously unfriendly ‘side eye’ look at then-Prime Minister Scott Morrison in 2021 was not one of her mistakes, she said.

Tame said she was ‘not a fan’ of the former PM, having openly criticised him over his handling of issues of sexual assault and what she sees as his disrespect for women.

Of her fiery, sometimes confrontational public persona, Tame confessed she feels like she is holding ‘a jerrycan’.

‘Good luck’ she says of anyone who takes her on.

She also opened up about why she turned down lucrative deals to work with L’Oréal Paris, Nike and a chance to work with the Young Global Leaders program.

Tame is believed to have been paid in excess of $200,000 to write the book, which she drew the cover artwork for.

The intricate drawing features two self-portraits of Tame surrounded by a woven network of plants and animals including mushrooms, spiders, wolves, a skull, and vines.

‘Go on, I’m ready for the two-headed Tasmanian jokes,’ she joked. 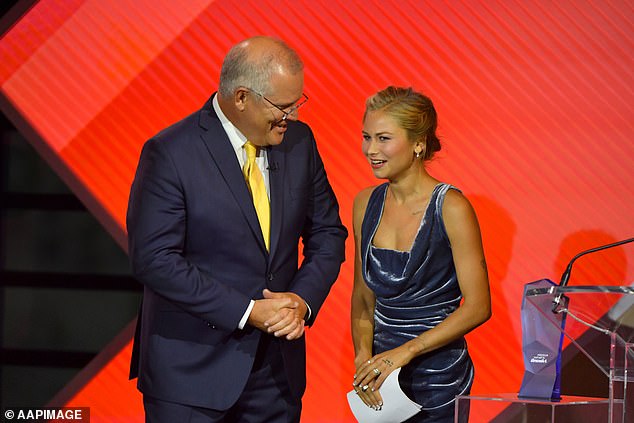 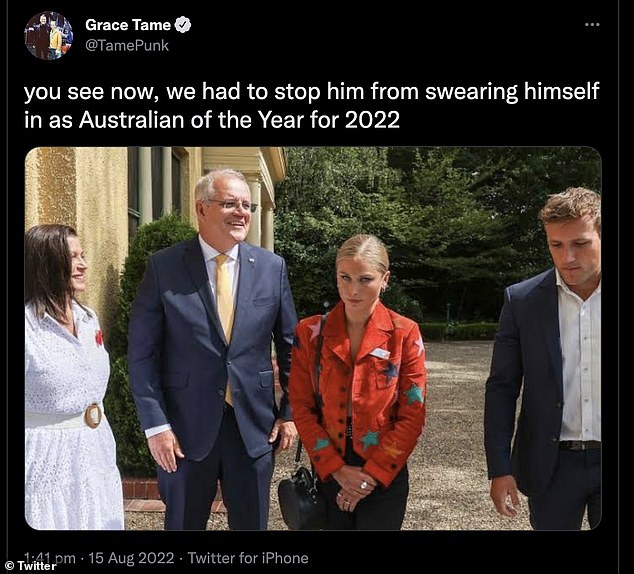 But her famously unfriendly ‘side eye’ look at then-Prime Minister Scott Morrison in 2021 was not one of her mistakes, she said. Tame said she was ‘not a fan’ of the former PM

Its cover price is $49.95, but at least one major retailer discounted it on pre-order. Angus & Robertson was taking orders with an asking price of $34.35 online on Saturday.

Bester was sentenced to two years and 10 months behind bars after pleading guilty to ‘maintaining a relationship with a young person under 17’ and possession of child exploitation material.

When he boasted about the abuse on Facebook he was jailed again, but spent less than two years in jail in total.

He has recently sent her inappropriate messages warning her of a ‘comeuppance’ at the time her book is released. She reported them to police.