Grade II, seven-bed home near Canterbury on sale for £2.5m

A Grade II listed, seven bedroom riverside retreat built on the site of an ancient port which helped rebuild Canterbury Cathedral is on sale for just £2.5million.

Watergate House sits on the River Stour and connects Canterbury in Kent with the English Channel.

Boats from Caen, France docked at the site during the medieval times to unload limestone and rebuild the famous cathedral following the Norman Conquest.

A view from the garden of the historic Watergate House in Fordwich on the River Stour, where the stones of Canterbury Cathedral were unloaded nearly 1,000 years ago 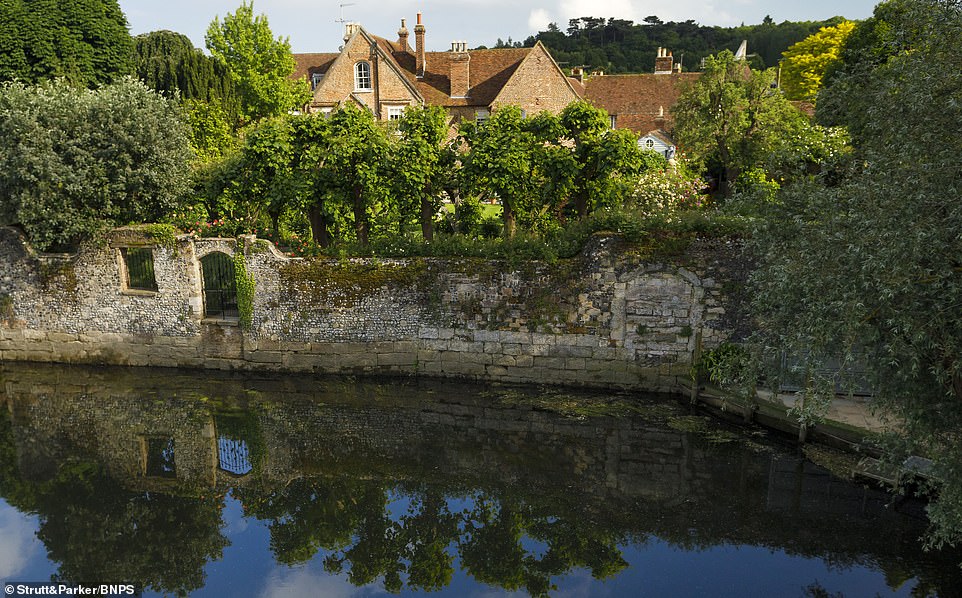 The property has now been restored to its former glory and represents a bargain at just £2.5million. The gate which opens straight onto the river was used in medieval times by boats from France unloading limestone to rebuild Canterbury Cathedral 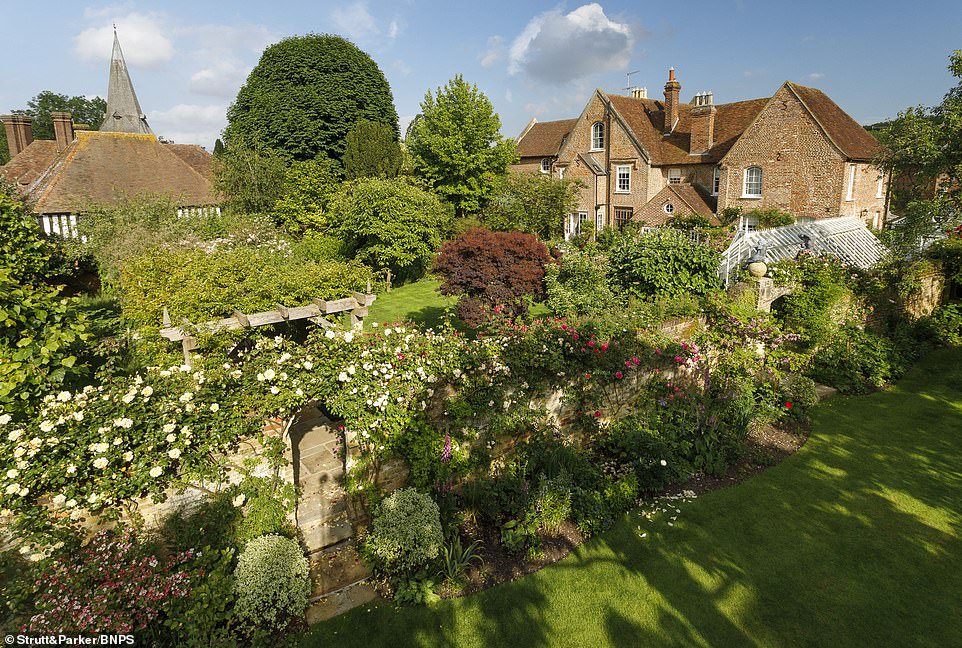 The idyllic garden is one of the unique selling points for the property, as no expense has been spared bringing it up to scratch with a beautiful array of green, red and white colours scattered around the £2.5million home

The luxury home is in Fordwich, which holds the title for the smallest town in England.

The two gates which lead directly onto the river are still situated on the property, although they are just used by leisure boats now.

The house featured in the 1944 film A Canterbury Tale, as Fordwich doubled as the fictional village of Chillingbourne.

Owners Patrick Heren, a writer, and his interior designer and gardener wife Fiona Cadwallader bought the 500-year-old property 20 years ago and spent eight years and thousands of pounds doing it up.

The couple, who are now downsizing, say the historic property has plenty of its own Canterbury tales.

When they bought the property, it was in a dreadful condition, with a leaky roof, rotten windows, damp throughout and a serious mice infestation. 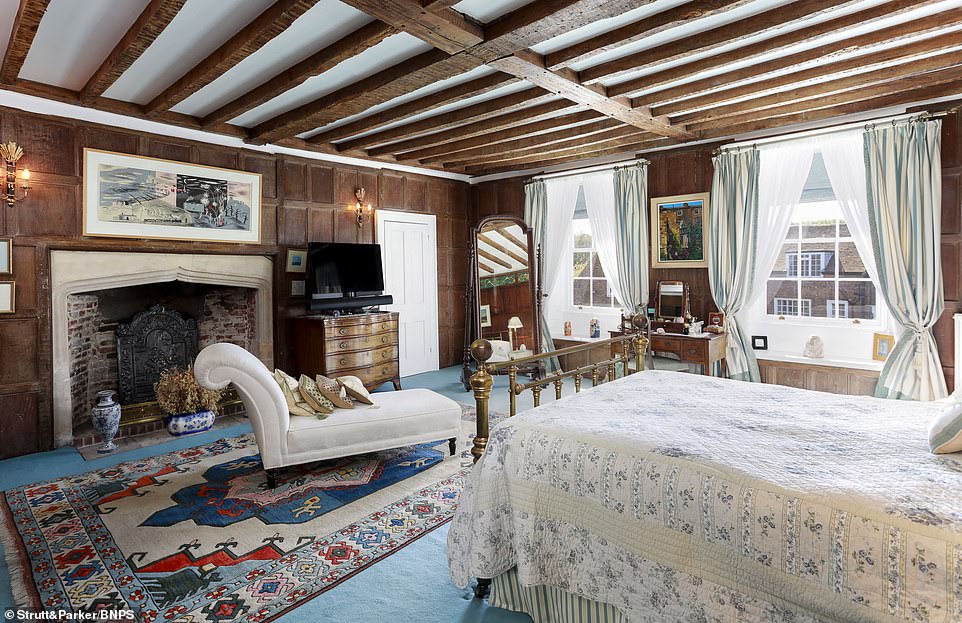 For the new occupants of the home, there will not need to be much invested in refurbishing the home as it stays true to the history the house holds. Exposed wooden beams, the fireplace and wooden panelling on the room add a sense of grandeur to the master bedroom 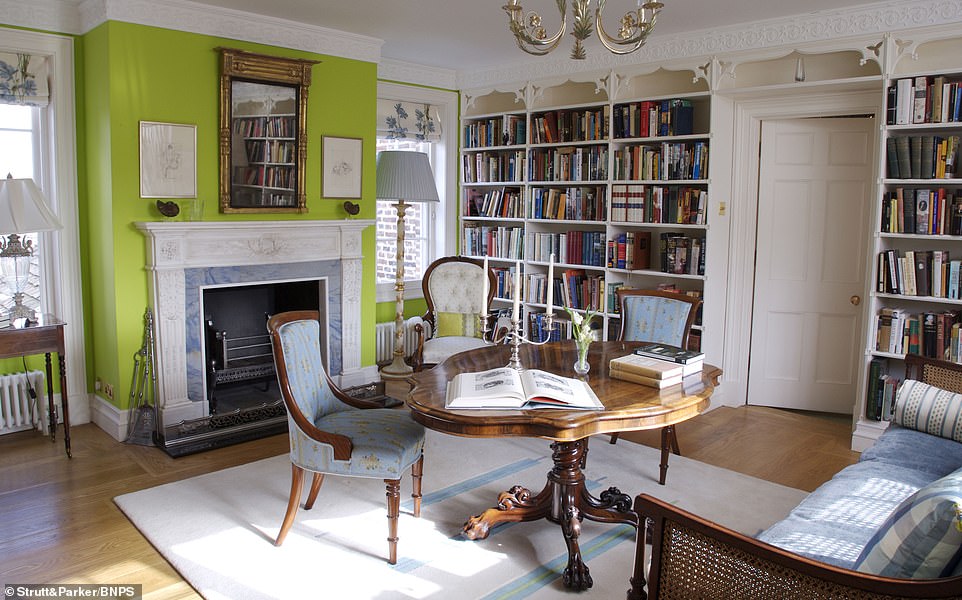 Inside the property, a blend of new influences and the traditional fittings make the property extremely homely. A grand wooden table is the centrepiece in this studyroom, and the fireplaces have been brought back to life

The ancient port town of Fordwich

The Domesday Book records the obligation of the Cinque Ports to supply ships and men to the King once a year.

This ship service continued for over three hundred years until larger ships were needed by the Navy.

Each of these main ports had a number of subsidaries, known as ‘limbs’.

Fordwich, which belonged to St Augustine’s Abbey from Saxon times until 1535, was a limb of Sandwich and helped to import limestone from Caen, Normandy, to help rebuild Canterbury Cathedral. 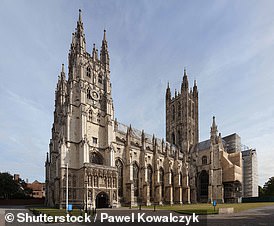 Following heavy investment, they have breathed a new lease of life into the home, uncovering the huge fireplaces, original panelling and the remains of an ancient mural, which they restored with the help of an expert from Canterbury Cathedral.

The couple also researched the history of their home and found out it belonged to St Augustine’s Abbey from Saxon times until 1535. The present garden was the site of St Augustine’s Wharf.

The house was rebuilt in brick in 1560, with extensions and alterations added in the 17th, 18th and 19th century.

Among its past owners were John and Gregory Blaxland, who lived there until 1806 when they became the first non-convict settlers of Australia.

Blaxland is renowned for finding the route over the Blue Mountains that allowed the colony to expand into the interior and is also credited with making the first Australian wine.

Shakespeare plays have been staged at the river meadow opposite, which is also owned by the existing couple, and a Bard-themed episode of the BBC’s Countryfile was filmed on their jetty and Dame Judi Dench used the couple’s bedroom as her dressing room.

Fordwich was once a busy town with a lucrative river trade and competing quays – Canterbury’s port from Roman times until 1830 when the railways arrived – but now it is little more than a quiet village.

It has a population of under 400, two pubs, a redundant church, a medieval town hall and a cluster of character homes. 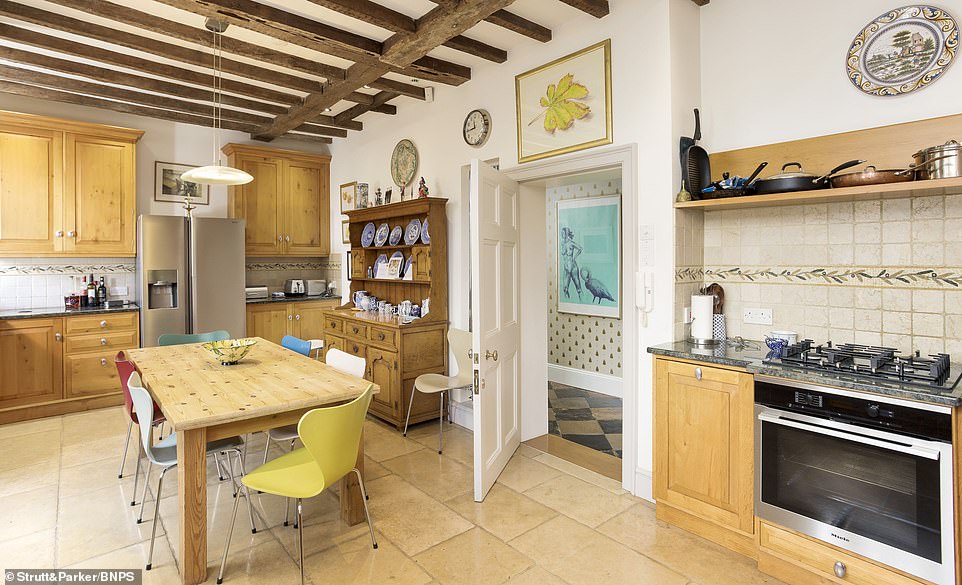 The kitchen has been brought into the 21st century with its modern fittings, including gas cooker, fridge-freezer and cupboards. The exposed wooden beams on the ceiling help to remind the new owners of the history the house holds 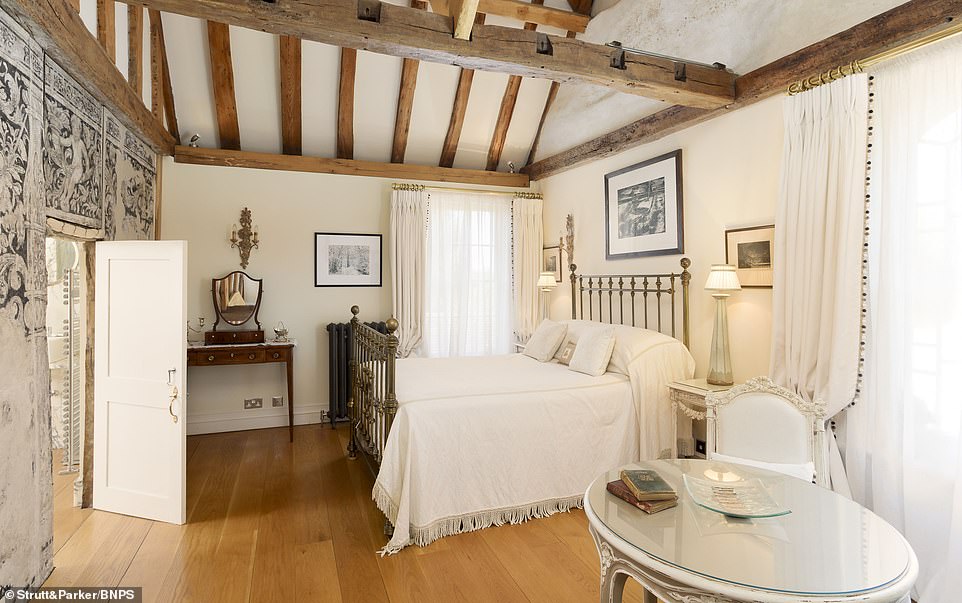 Exposed beams are a feature throughout the property. In this bedroom, a much lighter feel has been given to the property, which has been kitted out with white bed covers, white walls and a white table and chair. The curtains and blinds are also white, giving it a light and airy feel 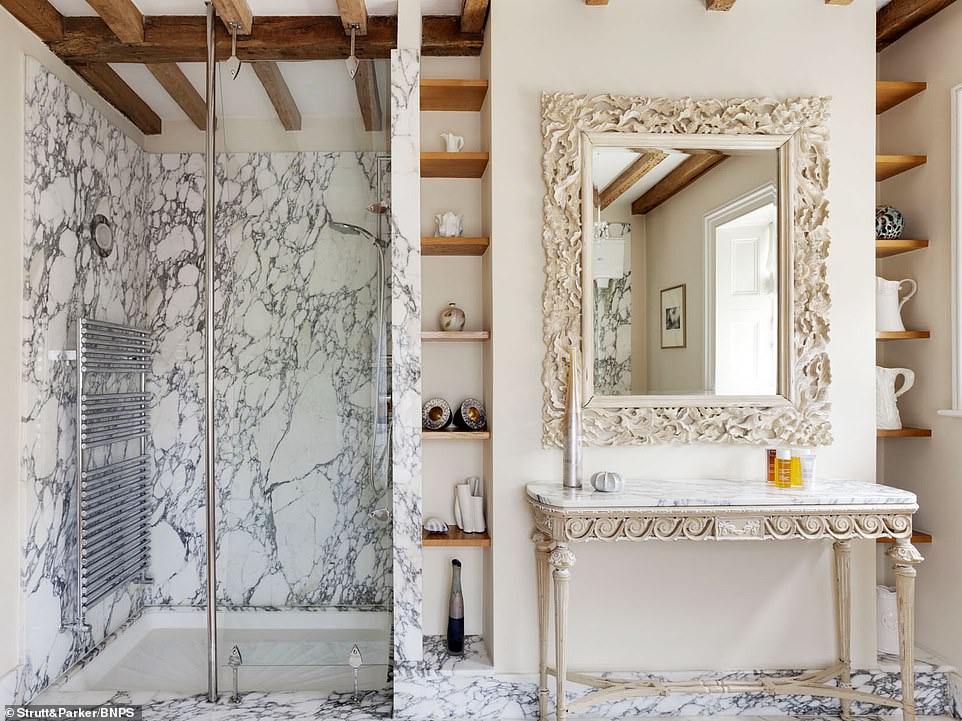 Just one of four luxury bathrooms in the property. Marble is a prominent feature inside the bathroom, giving it a luxury finish. Like many of the other rooms, the exposed wooden beams are on show for all to see

Mr Heren, 66, said: ‘When we bought it, it was a bit of a mess but it was clearly a remarkable old house.

‘The previous owners were elderly and only really seemed to have lived in the kitchen.

‘We saw the potential it had but we had no idea how much it was going to cost or how long it would take to refurbish it.

‘It’s a unique house and has a lot of hidden history to it.

‘We’ve been very happy here and will be very sad to leave it, our sons are not very pleased that we’re selling.

He added: ‘It’s a very friendly, comfortable house with lots of space. It has a lovely walled garden and access to the river. It’s got a lot going for it.’ 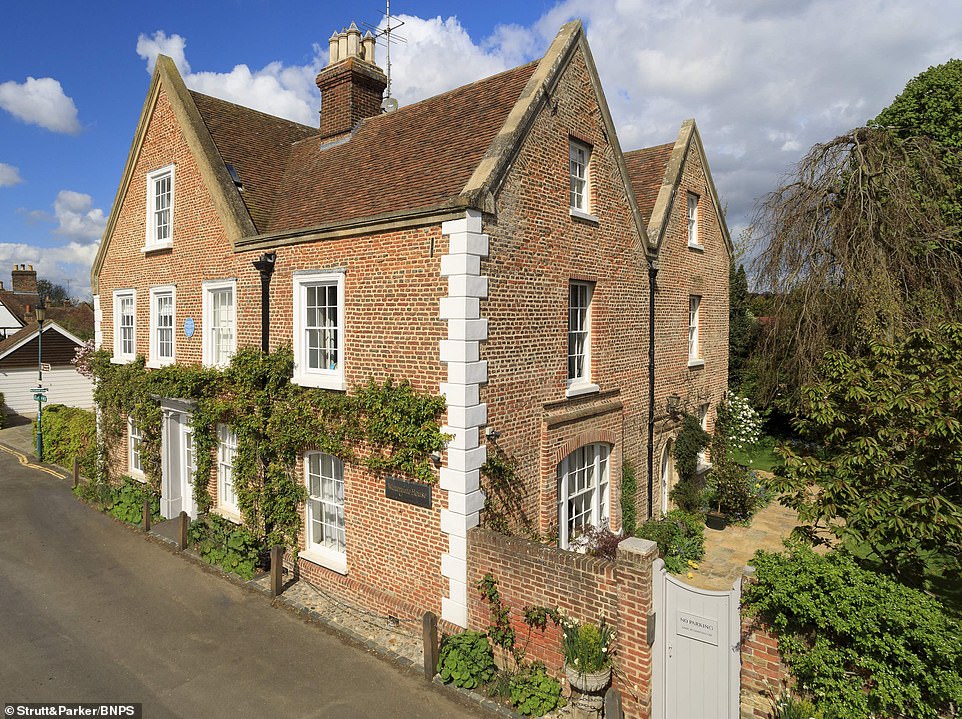 A street view picture of Watergate House, which sits on the River Stour. A blue plaque is adorned on the outside of the property, which dates back to the Saxon times. The property was rebuilt in stone in 1560 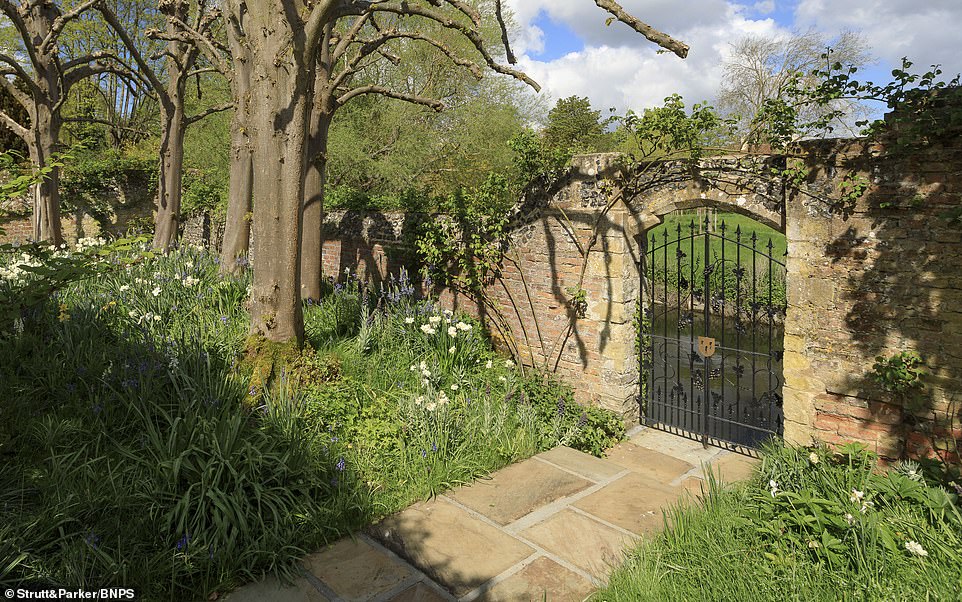 The gates of the property open directly onto the River Stour, which was used in medieval times to as one of the main shipping lanes that helped commerce in the pre-industrial period 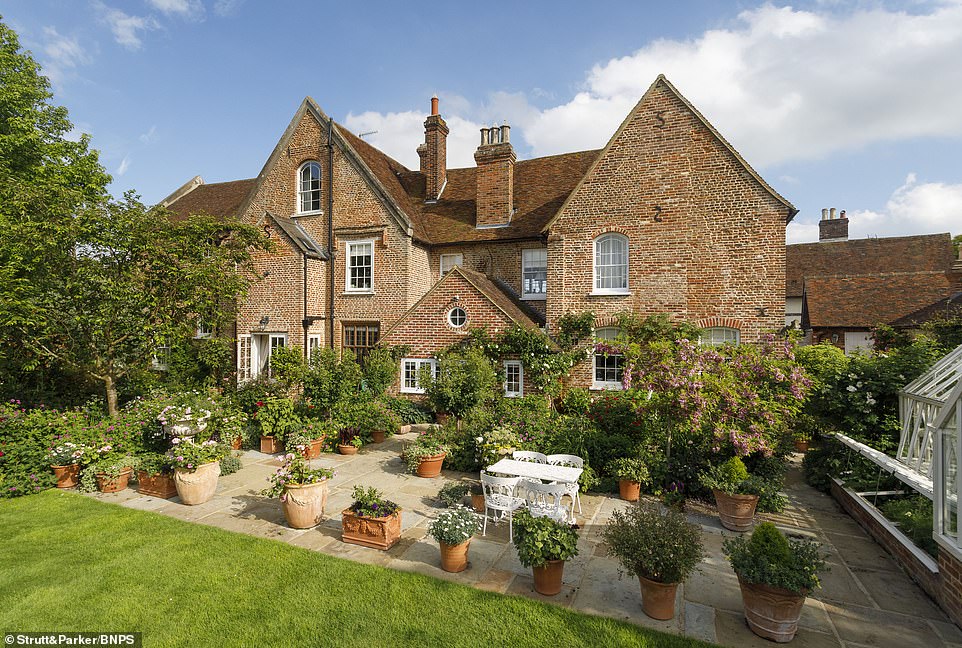 When the property was bought by the current owners Patrick Heren, a writer, and his interior designer and gardener wife Fiona Cadwallader, the home was in complete disarray, with a leaky roof, rotten windows, damp throughout and a serious mice infestation