Falwell dismissed the protest on Monday, telling The Associated Press that it’s ‘all just grandstanding.’

The students organized the effort after Falwell, in tweets and interviews, defended the president’s response to a white nationalist rally in Charlottesville, Virginia, that led to deadly violence.

Democrats and Republicans, business executives, artists and other religious leaders have criticized Trump for saying ‘both sides’ share blame, but Falwell has repeatedly gone to bat for Trump.

Jerry Falwell Jr was on ‘Fox & Friends’ at 8:15 a.m. on Monday, insisting Donald Trump ‘doesn’t have a racist bone in his body’

‘President Donald Trump does not have a racist bone in his body. I know him well. He loves all people,’ Falwell said Monday in an interview with ‘Fox & Friends.’

He said the president had made ‘very clear’ who the culprits were because he called out ‘the Nazis, the white supremacists, the KKK members by name.’

Georgia Hamann, a 2006 Liberty graduate who works as an attorney in Phoenix, said a friend of hers started the movement.

A Facebook group had more than 300 members as of Monday afternoon, and Hamann thinks it will grow.

‘Our hope is that the moderate alumni of the school, folks who are moderate Republicans … will call on the school to manage this situation better, to rebuke Mr. Falwell for his apparent inability to distinguish between what’s politically incorrect, as he puts it, and what’s morally correct,’ Hamann said. 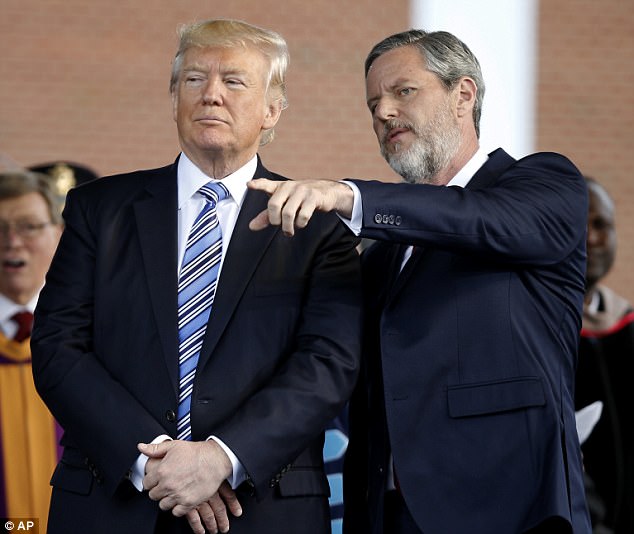 Falwell said the president had made ‘very clear’ who the culprits were because he called out ‘the Nazis, the white supremacists, the KKK members by name.’ Trump is seen standing with Falwell in Lynchburg, Virginia on May 13, 2017

Rebekah Tilley, a 2002 graduate who lives in Ohio, said returning the diplomas seemed like the only appropriate step after Falwell joined David Duke, a former leader of the Ku Klux Klan, in applauding the president’s comments.

‘I’ve been talking to other friends from Liberty who feel there is no other way to express our outrage and our sorrow,’ Tilley said.

‘One is a military spouse – a home-school mom with four kids in Oklahoma – who texted me that she just dug her diploma out of a box to mail it back,’ she wrote in an email.

Falwell, meanwhile, said the graduates were just looking for their ‘five minutes of fame.’

Sending in a diploma doesn’t change where they earned it, he added.

‘When they do their next resume, my guess is they’ll list it,’ he said.

Liberty, about an hour southwest of Charlottesville, was founded in 1971 by Falwell’s father, evangelist and Moral Majority leader the Rev. Jerry Falwell, with just 154 students.

It now has a total enrollment of more than 110,000 students, including its huge online education program. 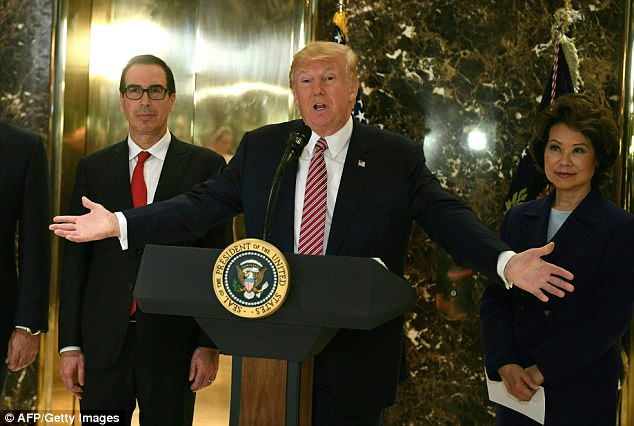 Democrats and Republicans, business executives, artists and other religious leaders have criticized Trump for saying ‘both sides’ share blame for the violence in Charlottesville. Trump is seen commenting on Charlottesville at Trump Tower in New York last Tuesday

It says it is the largest Christian university in the world, and remains an influential hub for conservative politics, frequented by candidates courting evangelical voters.

Falwell was an early and ardent Trump supporter, which caused some controversy on campus during the presidential campaign.

A group of students called Liberty United Against Trump attracted national media attention by rebuking Falwell for expressing support of Trump after he was heard making vulgar comments about women in a 2005 video.

Trump has earned some of his highest approval ratings from evangelicals throughout his tumultuous presidency, and Falwell isn’t alone among religious leaders who continue to support him.

Trump dismantled other presidential boards amid multiple defections last week, but only one of Trump’s evangelical advisers has quit.

‘The Fake News should listen to what he had to say. Thanks Jerry!’ Trump tweeted.