A grandmother, who shot a machete-wielding burglar with a crossbow, believes homeowners should always keep ‘something to strike back with’ in case intruders attack.

Anji Rhys, 49, grabbed her weapon, nicknamed ‘Manstopper’, when the four intruders broke in to her home in Dunstable, Bedfordshire. The weapons fan leapt into action after they broke in while she was watching TV and shot him with her prized possession.

Unlike Richard Osborn-Brooks, she was not arrested after the attack because no one had come forward to report it.

Mr Osborn-Brooks stabbed Henry Vincent, 37, to death after he tried to burgle his home last week while the pensioner’s wife, who has dementia, was in the property in Hither Green, south east London.

And Ms Rhys believes everyone should have the right to protect themselves and their families in their own home.

Anji Rhys, 49, grabbed her weapon, nicknamed ‘Manstopper’, when the four intruders broke in to her home in Dunstable, Bedfordshire Speaking on This Morning with her partner Rebecca McCarvel, she said: ‘I think everybody has a right to defend their home and their family 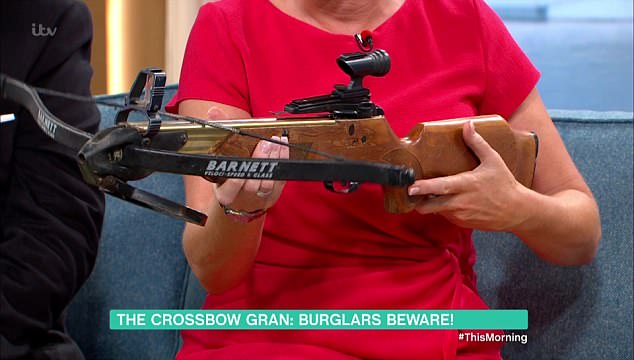 Speaking on This Morning with her partner Rebecca McCarvel, she said: ‘I think everybody has a right to defend their home and their family.

‘Everybody should be prepared. The police are overstretched – they can’t be everywhere. The police response for us was fantastic. They were absolutely brilliant and commended me on my actions.

‘I think all of us should have something you can strike back with. Not necessarily a weapon. I think the best defence is CCTV.

‘What are the alternatives if you don’t fight back?

‘I see him as my assailant and I was the victim but other people don’t always say that. They said they were going to come back and kill us.’

Ms Rhys, who used to be a semi-professional Thai boxer, said the gang were all white and spoke with local accents.

Reliving the ordeal, she said: ‘We live in Dunstable in a quiet area. It happened about six weeks ago. We remained silent so the police could carry out their investigation. Anji Rhys, 49, grabbed the weapon, nicknamed ‘Manstopper’, when the four intruders broke in to her home in Dunstable, Bedfordshire, yesterday 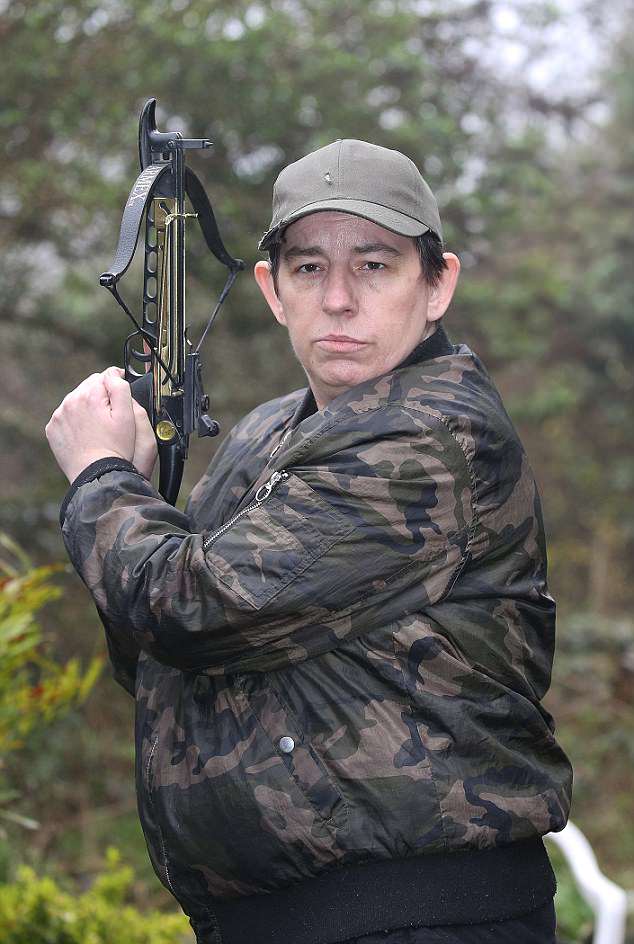 ‘I just came in about 9.30 and Becky starts work early. Ironically I just put 24 Hours In Police Custody on the TV and then I heard what I thought was a massive explosion. But it was actually my front door being kicked in.

‘I got up to see what was going on and I saw a man with a hammer right up to my face. He was screaming at me “where’s your weed, where’s your grow”.

‘There were profanities as well which I can’t repeat. He mistook our address for a drug den, absolutely. It was just one man I thought.

‘I immediately thought to make it safe and grab my crossbow, because I have a lot on the wall – this is my hobby.

‘I have a huge garden and I’m at my happiest when I’m crawling around in it and shooting my crossbow.

‘My thought initially was to discharge the crossbow so it couldn’t be used against us. Then I saw another three masked men with machetes and garden shears coming in behind. 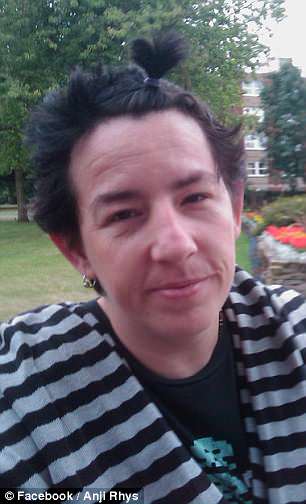 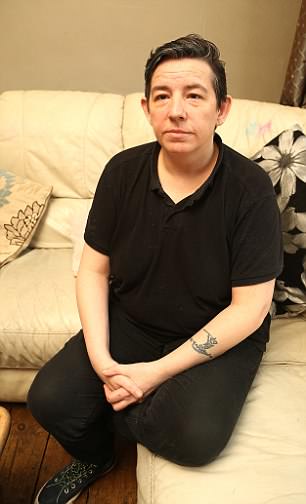 Anji Rhys, 49, shot an intruder with a crossbow nicknamed ‘Manstopper’ after a gang wielding machetes broke into her home in Dunstable, Bedfordshire

Ms McCarvel said: ‘I had woken up and he said “put your hands up and put your head down”. I heard the upstairs and them getting my son, Dillon who is 22.

‘He’s woken up and he’s got garden shears around his neck, saying “get downstairs right now”. That was my worst thing seeing my son on the floor and not being able to do anything. They said they were gonna hit him over the head if I did anything.

‘It was the worst feeling ever.’

Ms Rhys has left her job at a call centre because injuries to her head, hand and legs. 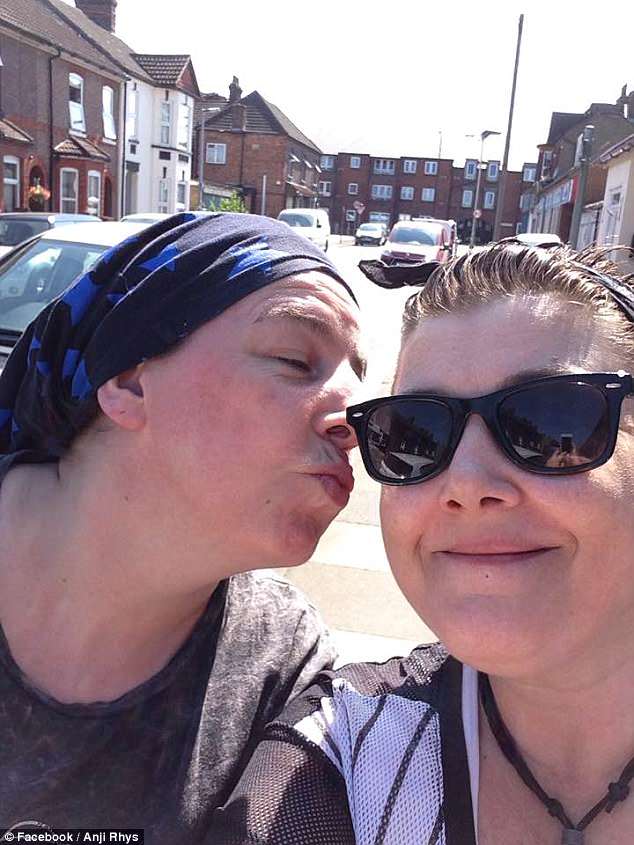 As a survivalist, Ms Rhys has plenty of other weapons to defend herself with including a knife and torch she keeps by her bed.

She said: ‘The man with the machete was leaning over and I had a struggle with him to grab the crossbow and I shot it into his belly.

‘It was a six-inch bolt and it disappeared. He actually fell on me and hit me with the machete. Becky actually saved me by pushing him off me.

‘A crossbow is a one shot thing and then it’s useless. After that I tried to throw it through the window to raise an alarm but it got caught in the curtains like a goalie net.

‘It felt like a lifetime but it was probably only about four or five minutes. We were all screaming. There was an 82-year-old woman sleeping upstairs. She slept through it.

‘They tried to take off but they couldn’t get out. They got his profile from the front door because he was bleeding.’

The police are yet to find the intruders – one of whom is likely to still be injured after being shot at.

Ms McCarvel said: ‘They’ve got a DNA result but they’ve got no profile so until he does anything again…

Ms Rhys added: ‘The impasse we’ve got there is that if he comes forward as my victim he will incriminate himself.’