Great British Boltholes: A review of Langley Castle in Hexham

Great British Boltholes: Hexham’s Langley Castle is an award-winning medieval marvel with some ghostly goings on…

By Neil Armstrong For The Mail On Sunday

Like any self-respecting castle, the 14th Century stronghold of Sir Thomas de Lucy has a ghost. The sobbing Grey Lady, who glides along its corridors, is said to be Sir Thomas’s daughter Maud – she flung herself from the highest window when her husband was killed in the Battle of Shrewsbury.

Despite this, Langley Castle is the North East England Hotel of the Year, a title it has won six times, and there’s nothing ethereal about its excellent hospitality.

Northumberland’s only castle hotel, a mile outside the village of Haydon Bridge, is picture-perfect. When I arrived, peacocks were strutting in the grounds and, over one of the towers, the red and gold flag of Northumberland was snapping in the wind.

Inside, the decor is ‘medieval redoubt’. There are tapestries on the walls, suits of armour on the staircases and iron chandeliers.

The guest rooms have all the modern amenities you would expect from a four-star hotel. Although not the grandest, the Tower Room, in the top of a turret, is one of the most popular. From the battlements – there’s a tour every morning – you can see Hadrian’s Wall, the fortified boundary built by the Romans 2,000 years ago.

It’s a short drive to Newcastle and the castle borders ‘Reiver country’, the lawless land between Scotland and England where feuding families ruled the roost for centuries.

The hotel is old-school without being stuffy. At Langley, they think ‘hipster’ is something a reiver keeps his dagger in. For example, you don’t have to have a drink in the grand drawing room before dinner – but they sort of like it if you do.

And as for the Grey Lady, the barman in the small cocktail bar at first insisted he didn’t believe in her but then went on to tell me about that one time late at night on the main staircase… 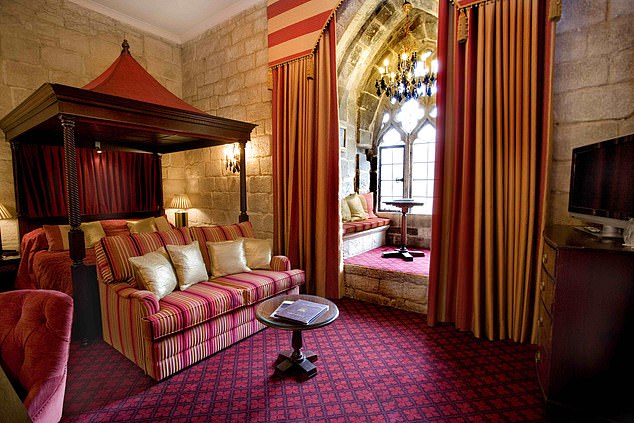 Pictures is one of the castle bedrooms. There are nine in total and they have all the mod cons

The USP: Allows you to indulge your fantasies of being king or queen of the castle.

The rooms: There are nine in the castle and a further 18 in buildings in the grounds.

The food: Posh and delicious. The dinner menu is heavy with meat and game but I had a crab starter followed by a wonderful slab of halibut. Three courses cost £44.95.

Langley Castle, Northumberland. Double rooms from £290 B&B. Those in the grounds from £99 B&B. Visit langleycastle.co.uk for more information.