Great British Boltholes: Be king of the castle at this holiday home on the Pembrokeshire coast

At 5pm, the great twin-portcullis gate of Manorbier Castle in Pembrokeshire slams shut, as the castle closes to the public – but not to the lucky people who’ve rented the Victorian cottage tucked inside its Norman walls.

Suddenly you have the smugglers’ well, witch’s hat tower, dungeon and sprawling, undulating lawn, all to yourself.

I used to feel that sensation of comfort and seclusion for weeks on end during my childhood summers in the 1970s.

Magical Manorbier: You can stay in a cottage inside the walls of this castle by the sea

For a decade, my family rented that cottage and, ever since, Manorbier has been my mental refuge. Today, Manorbier is magically unchanged. It is a combination I’ve never seen anywhere else: a Norman castle, overlooking a beach and the sea, with the pretty village of Manorbier, with its medieval church just outside the castle gates.

The castle was built in the 12th century, one of a chain of magnificent Norman castles strung across Pembrokeshire.

The best are Carew, Picton and Pembroke, the hulking, great fortress that dominates the town and has the tallest keep in Britain. It was this early Norman foothold in Pembrokeshire that gives the county its nickname, ‘Little England beyond Wales’.

Still, today, in south Pembrokeshire, English speakers dominate over Welsh ones, and the place names — Bosherston, Lamphey, Haverfordwest — are English. As you head into north Pembrokeshire, you meet the ancient Welsh lands, with their ‘Ll-‘ names: Llanfair-Nant-Gwyn; Llanychaer. 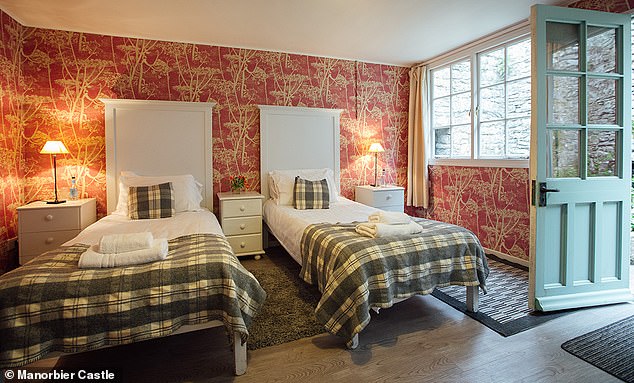 The holiday home sleeps 12 and costs from £2,299 for a week to rent. Above, a twin bedroom in the annex

Make sure you visit St David’s, Britain’s most charming small cathedral, built out of the lovely purple Caer Bwdy stone, which you can still see in the cliffs at nearby Caer Bwdy bay.

Ah, the beaches — the best in Britain. The loveliest are the long, sandy strands of Broadhaven and Freshwater West, both National Trust; and the prettiest, tucked between two headlands, Barafundle. It’s bird heaven around here, too.

Every summer, thousands of guillemots come to nest on Stack Rocks, limestone towers moored at sea which are only 50 yards from the coast: far enough to stop rats eating their eggs; close enough for you to see their darkest grey and white plumage and hear their howling call. 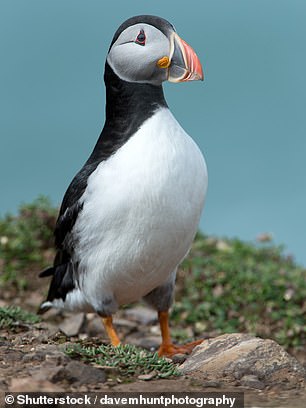 Choughs circle overhead, their bright red legs and beaks prominent against their black feathers. For birding nirvana, take a day-trip to Skomer Island. Along with the guillemots and razorbills, you’ll find puffins, the rare Skomer Vole and a quarter of a million Manx Shearwaters (although these shy birds only come out of their burrows at night).

For a traditional bucket-and-spade holiday, Tenby, with its two beaches and clifftop castle, is ideal. A fashionable resort since the 1780s, Tenby lost out to the foreign holiday boom of the 1960s, but that means it has survived as a delicate time capsule of 18th and 19th century, elegant, classical terraced houses, overlooking Caldey Island. And it doesn’t end there.

I have been to Pembrokeshire every summer since 1972. And, every year, I find something new — and unique to the country. Not so much Little England beyond Wales as Little Paradise in Wales.

May Tree Cottage in Manorbier village sleeps 5, from £336 Friday to Monday.