A Great Dane so neglected she looked like a ‘skeleton’ is now living a pampered existence on a farm – with the doggy soulmate she met after being rescued.

Two-year-old Cindy couldn’t walk due to life-threatening pressure sores, had open wounds exposing her hip bone and weighed just two and a half stone when she arrived at the Animal SOS Sri Lanka sanctuary in December 2018.

She was painstakingly nursed back to full health by the shelter’s founder Kim Cooling and her team, who at times feared the plucky mutt wasn’t going to make it due to the severe neglect she had faced. 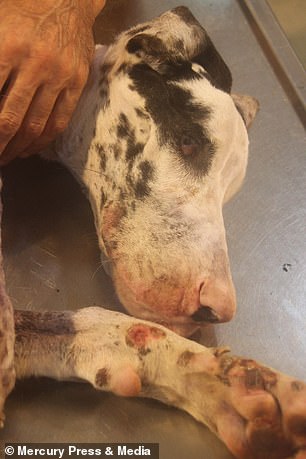 But happily, Cindy has made a full recovery and is now living in the UK with boyfriend Eddy, a one-and-a-half-year-old Jack Russel mix she became besotted with during her recovery at the shelter.

The little and large duo are cared for at a farm in Marton, Cheshire by animal lover Sean Burke, 52, a company director who fell in love with Cindy while visiting the shelter and vowed to adopt her once she made a full recovery.

The married dad-of-one said: ‘I didn’t know how she was still alive, the state she was in.

‘I thought: “How can anyone allow this to happen to such a beautiful dog?”

‘She was barely conscious a lot of the time, but she was so gentle and I thought if she recovered then she deserved a new life. She’s a lovely, comforting, gentle giant. It was my duty to get her out of that situation.’

Cindy was rescued by the sanctuary after her previous owners took the seriously ill dog, weighing less than 2st 8lbs, to the vets in the Sri Lankan capital Colombo.

A friend of the sanctuary spotted Cindy at the vets and arranged with her owners for her to be adopted by the shelter, a two-and-a-half-hour drive south.

Shortly after arriving, she was housed with rescue pooch Eddy, who was recovering from being hit by a car, and the two dogs quickly formed an inseparable bond.

Sean, who was visiting pal Kim’s sanctuary to help with the installation of a water treatment plant at the time, was so shocked by Cindy’s condition he promised he would adopt her back in the UK if she survived. 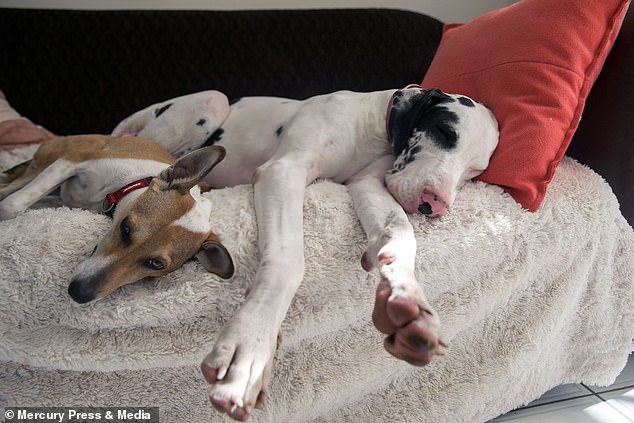 Kim, 63, who lives in London, said: ‘Cindy’s previous owners had given up on her and I assume they had no idea how to look after her.

When she arrived at the shelter she was like a skeleton. She couldn’t walk and she could barely lift her head, she was in such a terrible state.

‘Her pressure sores were life threatening – they were so bad that you could see her hip bone. She was covered in faeces too, but she was too weak to be bathed so we ended up using two bottles of dry shampoo on her.

‘We had to squirt food down her throat to keep her alive because was too sick to eat and drink on her own. She was on the brink of death for a few weeks and it was touch and go whether she was going to pull through. 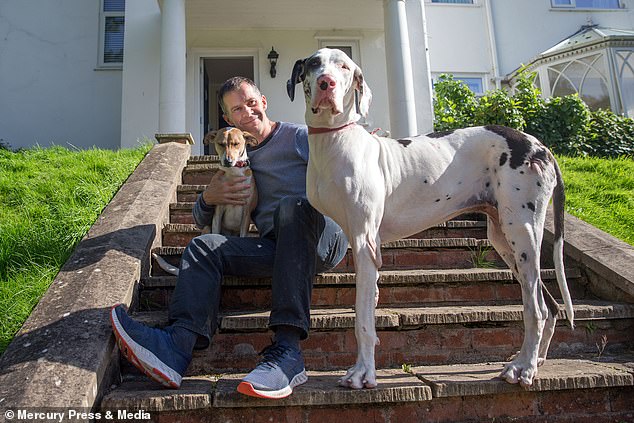 British businessman Sean Burke met the pair, vowing to adopt them and bring them to the UK

‘At the shelter, we kept her in a room at the back of the clinic so that we could keep an eye on her and Eddy, and they became very close friends. He had come to the shelter with his hind legs paralysed after being hit by a car and we were teaching him to walk again.

‘They were like little and large and they formed a very close bond. Now, they’re like boyfriend and girlfriend.

‘Sean was visiting at the time and he couldn’t believe how ill Cindy was. He was absolutely choked by seeing her condition.’

After six months of care at the sanctuary, Cindy made a full recovery, with her weight more than doubling to 7st 4lbs.

She flew out to the UK to start her new life with Sean last summer, alongside Eddy.

Sean paid for the duo’s travel costs to the UK, which added up to £4,500, with the flights and crating setting him back £3,500 alone and rabies tests, dog passports and admin costs another £1,000. 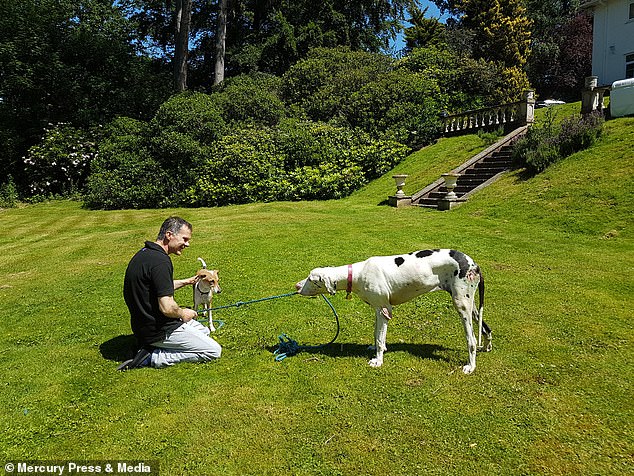 He even had to get a special crate made to transport Cindy, because the 5ft 8 pooch was too big to be flown back in a normal sized one.

Cindy and Eddy are now settling into life in Sean’s Cheshire farmhouse, which he recently moved to, and are enjoying playing in the four-acre grounds with his other two dogs, 10-year-old Sheepdog-Dalmatian mix, Fella, and four-year-old Lurcher, Prince.

Sean said: ‘I adopted them both because it would have been heart-breaking to split them up. They were fabulous from the moment they arrived.

‘She can cause a real mess: she has chewed so many shoes and coats and she’s always knocking things over, but I certainly don’t regret the money I spent.

‘I moved to a farm at the end of last year and Cindy and Eddy were awestruck at the size of the grounds.

‘They were crashed out on the sun loungers within a day or two of arriving and they love the food and going on long walks.’

To donate to the charity: https://www.gofundme.com/f/fedding-our-rescues-and-local-strays?utm-source=customer&utm-medium=copy-link-tip&utm-campaign=p-cp+share-sheet