Need to chill out? Then you might warm to the idea of staying in a former refrigerated truck trailer – one that has been transformed into a cosy holiday rental.

Polish mobile hotel chain Good Spot operates four such rentals – and is gearing up to launch a new service, where guests vote online for where they are set up.

While the details haven’t been finalised yet, Good Spot plans to open the vote in January, with holidaymakers selecting between two intriguing landscapes – a lake and a seaside location in Poland.

The vote will initially take place on Good Spot’s social media, but as the hotel grows – they aim to add 50 trailers to their current roster of four – their website will host the voting poll.

One potential location is a ‘mystery’ lake – a reservoir created by a glacier – which ‘delights with its crystal-clear water not polluted by exhaust fumes or sewage’.

Good Spot’s trailers are talking points in themselves. 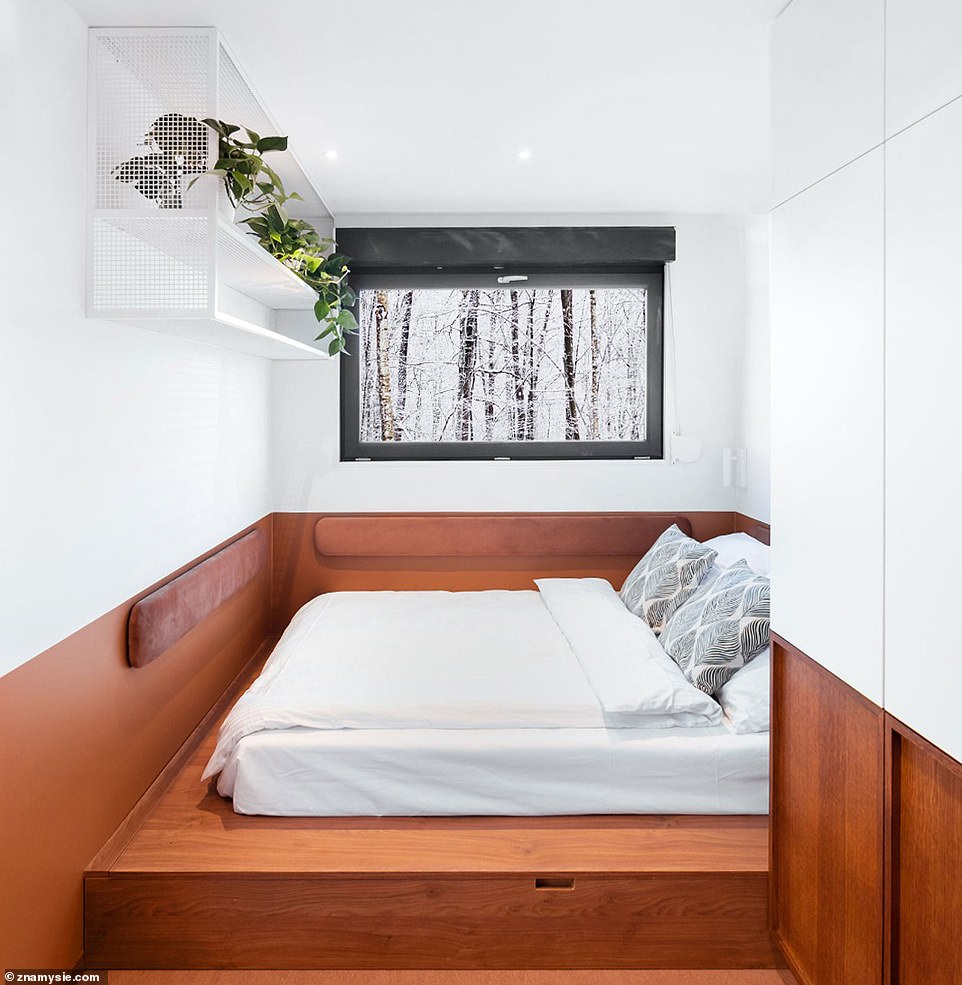 The trailers have been created by Polish design firm Znamy Sie, based in the city of Wrocław, which is delighted to have repurposed them 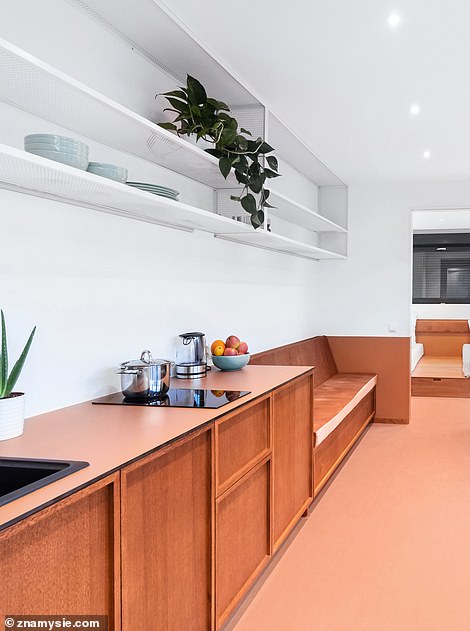 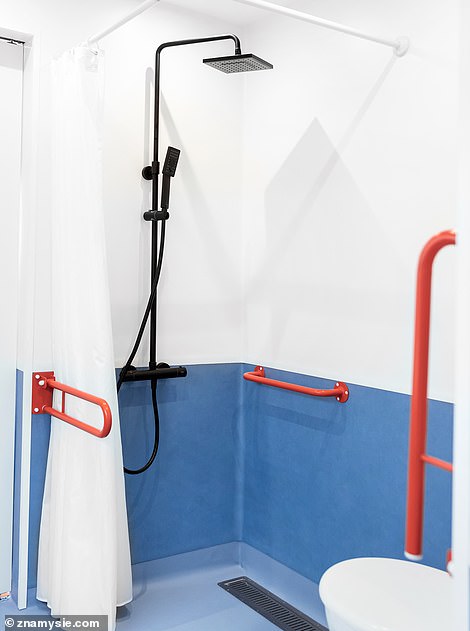 Pictured above is the kitchen and shower in one of Good Spot’s trailer apartments. The firm operates four, but is hoping to add another 50

They have been created by Polish design firm Znamy Sie, based in the city of Wrocław, which is delighted to have repurposed them.

A statement from the agency, run by college friends Aleksandra Majdzik, Bogna Kawa and Wojciech Nowak, reads: ‘A huge number of isothermal refrigerated trailers withdrawn from the market are imported to our country each year. Poland is thus becoming a graveyard for these no-longer-used trucks.

‘By renovating a trailer, we give it a second life!’

In the centre of each trailer is a bathroom, where the icy blue colour palette reflects the vehicle’s cold-storage history.

There is a kitchen, and two bedrooms at either end – one double, and one twin – plus a small porch running down one side.

The design intends to ‘evoke nostalgic associations with trips to the mountains and the seaside’, according to Znamy Sie.

The biggest design challenge was providing hotel-style amenities in such a small space.

As for the reaction to the unusual structures, the design agency says people are ‘curious’ when they see the trailers for the first time. 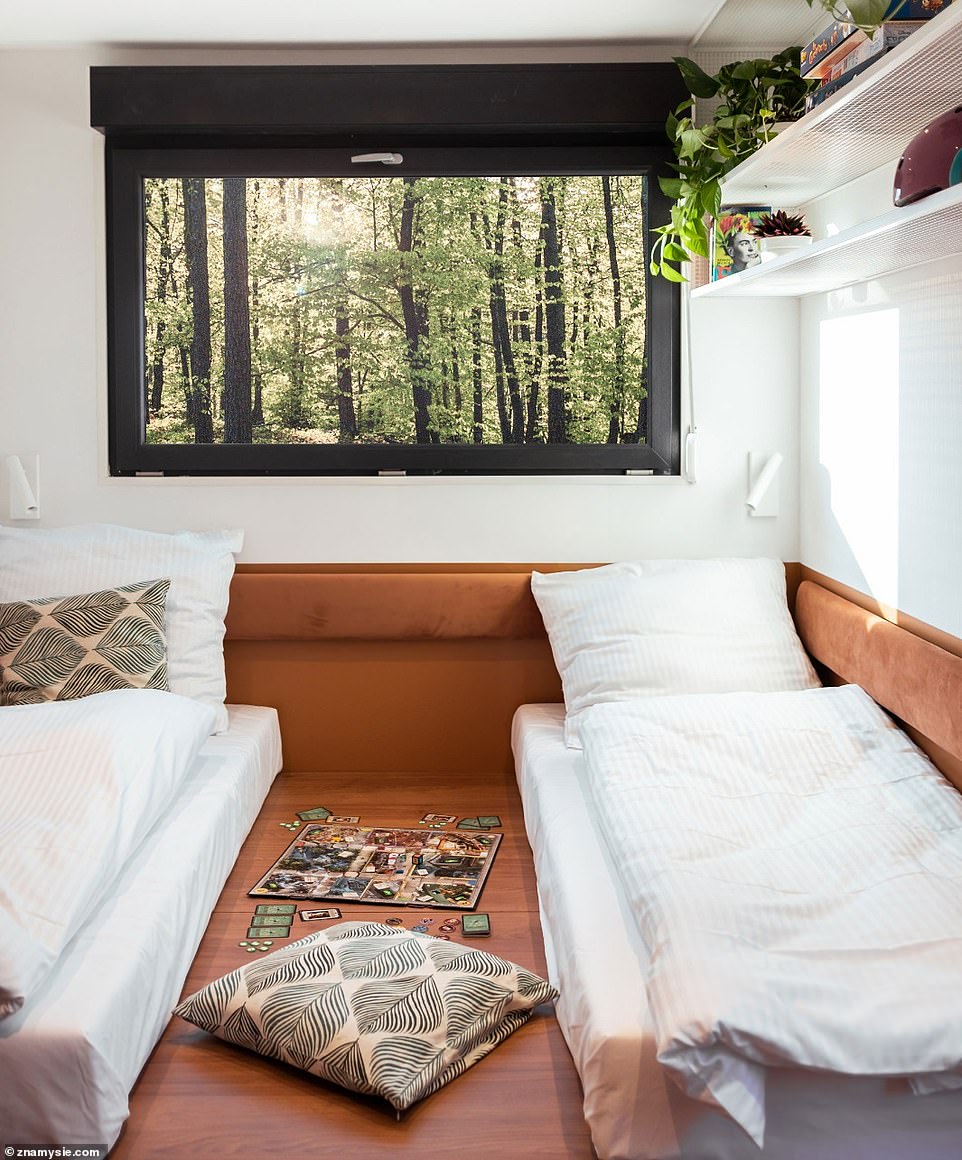 One Good Spot trailer reviewer said: ‘This was the best stay in the mountains we have ever had. Many thanks for such a beautiful place’ 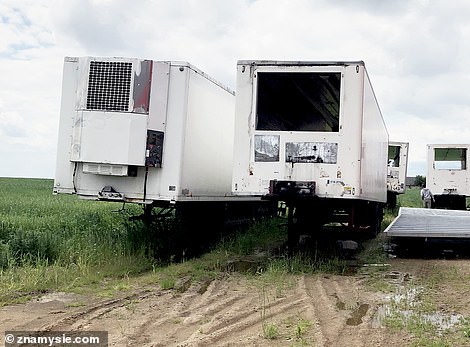 Znamy Sie says: ‘It is definitely an interesting experience. It is a bit associated with camping trips outside the city. However, it is not a typical caravan, in terms of use it does not differ from a small apartment.’

The hotel’s reviews speak for themselves.

One guest wrote after their stay: ‘An experience unlike any other. The trailer resembles a tiny hotel room, nothing is missing. We were just closing the beach season in Mrzezyno – we had close proximity to the beach and food, and at the same time, peace, quiet and forest surroundings like in a remote area. We will definitely come back, but this time we will throw ourselves into the mountain landscape.’

Another wrote: ‘This was the best stay in the mountains we have ever had. Many thanks for such a beautiful place.’

The company hopes to venture further afield in years to come, setting up the mobile hotel in different countries and across a wider variety of landscapes.

The four trailers spent the summer of 2021 in Mrzezyno, a village on the Baltic Sea, before moving in September to Karpacz, a ski town in the Karkonosze Mountains.

Landowners propose their sites for the hotel, generating revenue from the land rental. Good Spot investigates each proposal, checking the area in terms of its natural attractiveness, connections to power grids, and water and sewage systems.

The concept behind the business came when its founders were on a kitesurfing trip at the seaside resort of Hel in Poland. Taking in the scenery, they came up with the idea for a hotel that could ‘move around and stop in places that offer the best conditions and proximity to nature’.