A dozen police officers ‘intimidated’ a teenager boy and held his head against a metal shutter, new footage shows.

Five police vans swooped to detain then release the boy as part of a stop and search operation in Newton Heath, Manchester, on May 16.

Witness Chloe Seale, 36, said police acted like ‘the mob’ and claimed they held the boy by his throat after catching him smoking drugs.

Greater Manchester Police was referred to their professional standards branch after the incident involving at least 12 officers.

Five police vans (pictured) swooped to detain then release the boy as part of a stop and search operation in Newton Heath, Manchester, on May 16

Footage shows three policemen pushing the boy’s head against some metal shutters, while a fourth puts his hand on the boy’s chest.

They then drag the teenager away towards one of the five police vehicles on the scene.

The officers try to bundle him into the back of the van, shouting ‘get down’ as a siren rings out in the background.

Ms Seale posted the footage on social media with the caption: ‘All this for one teenager smoking a spliff outside the cafe while waiting for his bacon butty. Absolute joke. The amount of police I thought something serious was going on.’ 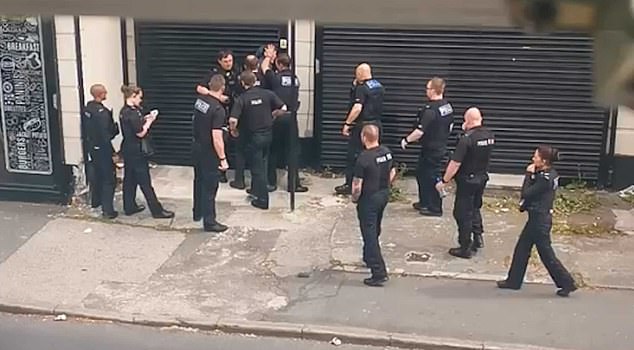 Footage shows three policemen pushing the boy’s head against some metal shutters (pictured), while a fourth puts his hand on the boy’s chest

She added today: ‘The young lad was stood with his friend and they were smoking. The police said it was a spliff, but the other lad ran off so I’m not sure if I’m honest.

‘Within minutes more and more police showed up, intimidating the young lad. He was being respectful towards them, the next minute they grabbed him.

‘He panicked, so more grabbed hold of him and slammed him into the shutters. One of the policemen had him by his throat at one point, then they took him to the van still shouting and swearing at him.

‘One officer spat and correct me if I’m wrong, but I’m sure I could be fined for spitting in the street.

‘The police are never around when you actually need them, but when two young boys aren’t causing a problem they show up like the mob and bully them.

‘It’s not on and the bullying has to stop. People are becoming afraid of the police because of their behaviour.’

Greater Manchester Police confirmed the incident is now under review.

A GMP spokesman said: ‘Shortly before 12.05pm on Saturday 16 May 2020, police on a routine patrol of the Newton Heath area attempted to execute a stop and search under the Misuse of Drugs Act. 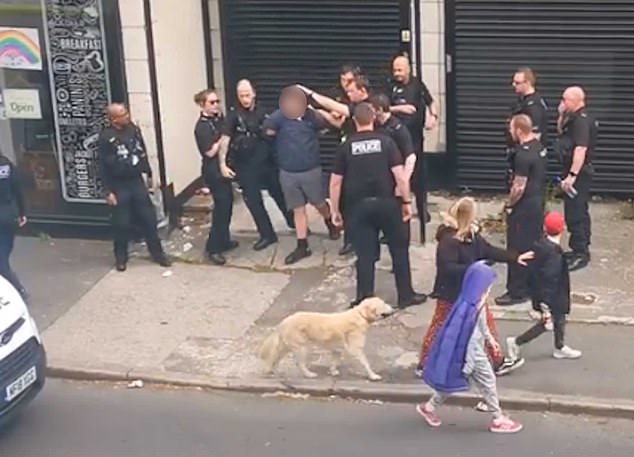 ‘One male fled the scene on foot, prompting officers to request back up. A second male was detained.

‘He has been released and faces no further action. This incident has been referred to GMP’s Professional Standards Branch.’

It comes after the force were referred to the Independent Office For Police Complaints at the start of May after two officers Tasered a man in front of his son.