More than 50,000 demonstrators took to the streets in the Greek province of Macedonia to continue a quarter-century-long campaign against the former Yugoslav nation they say is taking their name.

Flag-waving crowds in the northern city of Thessaloniki – the capital of the Greek province of Macedonia – gathered today to demand the Republic of Macedonia change its name.

Greece and the Republic of Macedonia, which share a border, have been locked in the name dispute since Macedonia declared independence from Yugoslavia in 1991.

Greeks feel deeply the use of the name Macedonia is a usurpation of their heritage and implies territorial claims on their province.

More than 50,000 demonstrators in the Greek province of Macedonia continued a 25-year-long campaign against the former Yugoslav nation they say is taking their name 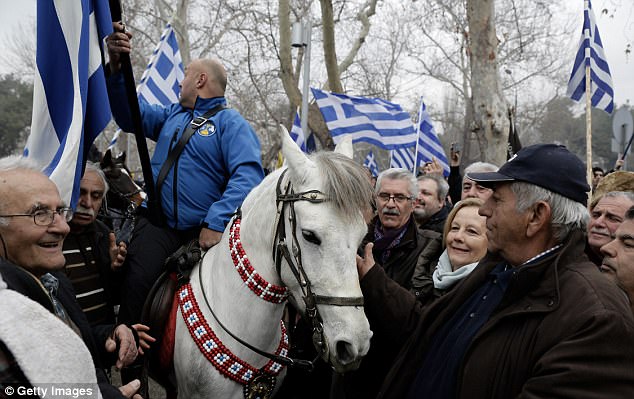 Greece and the Republic of Macedonia, which share a border, have been locked in the name dispute since Macedonia declared independence from Yugoslavia in 1991

Macedonia is represented in international organisations as The Former Yugoslav Republic of Macedonia and is seated in the United Nations under the letter T, right after Thailand.

Hardline clerics, far-right leaders and Greek diaspora groups had called for today’s rallies, with the turnout exceeding media estimates of 30,000.

Gathered around the statue of Alexander the Great in Thessaloniki were members of the neo-Nazi Golden Dawn party and local clergy.

Representatives from the main opposition party, New Democracy, were also present despite a tacit order from its liberal-minded leader Kyriakos Mitsotakis to boycott the protests.

A TALE OF TWO MACEDONIAS

Macedonia is a region of Greece in the southern Balkans and the second largest and most populous in the country.

The mountainous region incorporates parts of ancient Macedon, a kingdom ruled by Alexander the Great (336–323 BC) whose campaigns through Asia created the vast Argead dynasty.

The Republic of Macedonia is an entirely separate entity – a country in the Balkan peninsula in south east Europe.

It declared independence from Yugoslavia in 1991 and became and member of the United Nations in 1993.

But as a result of the ongoing dispute with Greece over use of the name, it was admitted provisionally as the former Yugoslav Republic of Macedonia (FYROM).

Cretans in traditional costumes who travelled from the southern island with their horses, as well as people from northern Greece wearing costumes from the Macedonian wars era a century ago, crowded at the White Tower on the Thessaloniki waterfront from early in the morning.

Greece and Macedonia returned to the United Nations last week hoping to reach a compromise that could end the 27-year dispute over the former Yugoslav republic’s name.

No public official was among the five keynote speakers.

The best-known speaker was Fragoulis Frangos, a retired general and former chief of the Greek Army Staff, who is said to harbour political ambitions. 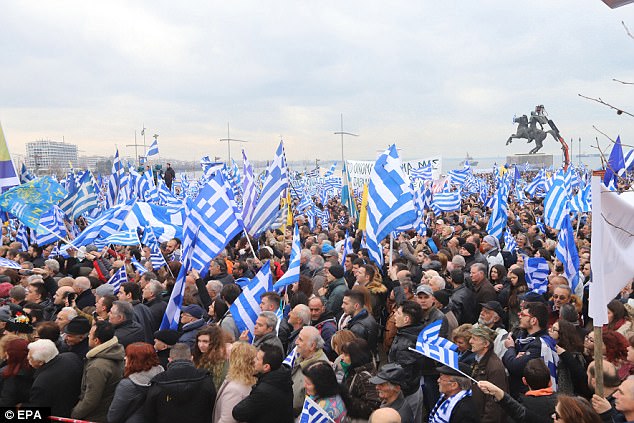 Athens argues that the name Macedonia suggests that Skopje has territorial claims to the northern Greek region of the same name, of which Thessaloniki is the capital 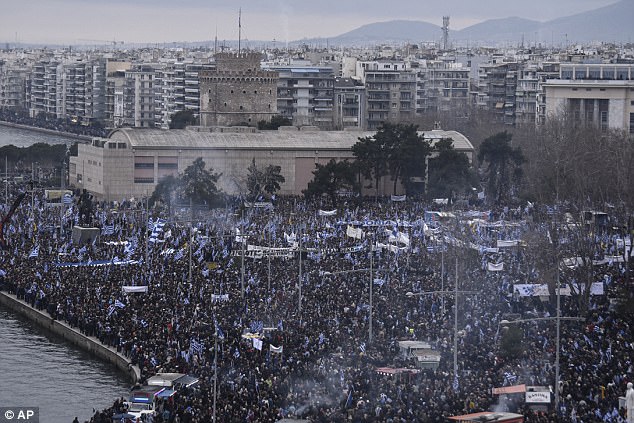 ‘Those who use the name of Macedonia and give it away with no scruples.

‘We call on the government and, especially, the foreign ministry and (foreign minister Nikos) Kotzias to become the hero of Greek Macedonians and not hand over the name.

The Republic of Macedonia’s history is complex and dates back to the sixth century BC.

It has been conquered by the Persian Achaemenid Empire, the Romans and the Ottomans.

In the aftermath of WW1 it was incorporated into the Serb-dominated Kingdom of Yugoslavia which became the Socialist Federal Republic of Yugoslavia in 1963.

The modern Greek state of Macedonia, on the other hand, was established in 1830.

Even before that, however, the area was identified as a Greek province albeit without clearly defined borders.

‘If he does, he should know he is a traitor to the nation.’

Several local lawmakers attended, as did the local bishop, Metropolitan Anthimos of Thessalonica, whom many people consider the real leader of the nationalist hardliners opposing an accommodation between the countries.

Anthimos, in speaking about the citizens of Macedonia, used the term Skopje, the name of its capital, which is how most Greeks refer to them.

‘Demonstrate, my brothers for Macedonia … Skopje will never be accepted with the name Macedonia by the people’s conscience,’ Anthimos thundered from the pulpit during his sermon.

‘If we only shut [access] to the port [of Thessaloniki], they’re dead the following week.’

The march didn’t reach the magnitude of one in 1992, when more than one million people – 10 percent of the population – joined a rally in Thessaloniki to proclaim that ‘Macedonia is Greek’.

According to a survey conducted for Greek radio station 24/7 by the Alco polling group, 63 percent of respondents said they thought it was in Greece’s best interests to seek a mutually acceptable solution at the UN talks.

And the Greek Orthodox Church, which is traditionally opposed to the use of the term Macedonia from Skopje and led the 1992 rally, appears to have distanced itself from Sunday’s events. 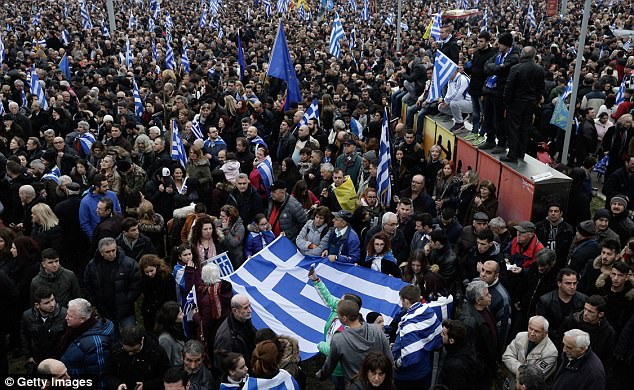 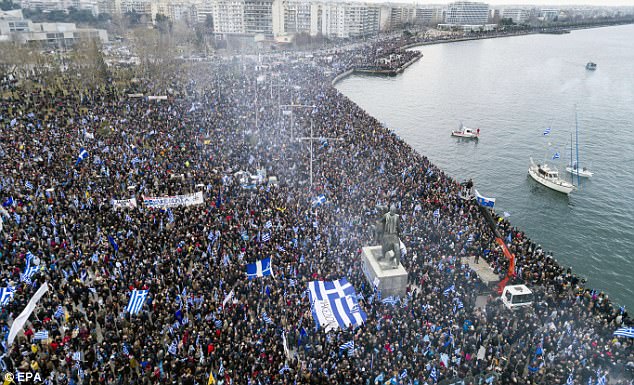 An estimate turn out of 30,000 was smashed with more than 50,000 ultimately attending

It was prompted by recent efforts on both sides of the border to find an acceptable compromise.

The defeat last year of Macedonia’s nationalist conservatives by the social democrats has improved the climate, and Macedonian prime minister Zoran Zaev accepted the invitation by Thessaloniki mayor Yannis Boutaris, an outspoken anti-nationalist, to spend New Year’s in the city.

Naturally, there were dissenters, but they didn’t show up, except for a few hundred anarchists, who had their own banner: ‘Against nationalism; the whole earth is our homeland.’

Some of them clashed with passers-by, prompting police to intervene.

People presumed to be right-wing extremists set fire to a building occupied by some of the anarchist counter-demonstrators in the center of the city. The building suffered extensive damage, but none of its occupants was present when masked men set fire to it.

Leftist prime minister Alexis Tsipras has said, most recently in an interview published Sunday in newspaper Ethnos, that he wouldn’t mind a composite name that includes the word Macedonia. 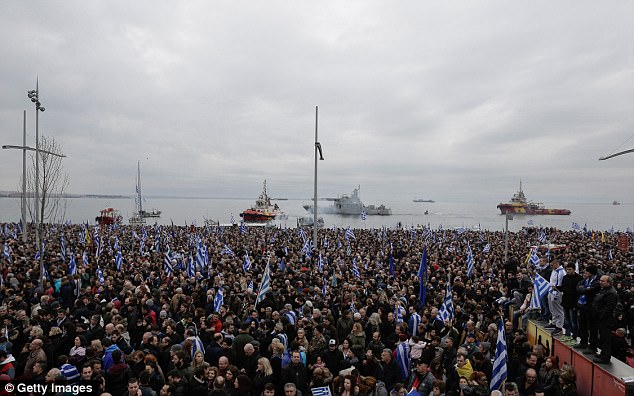 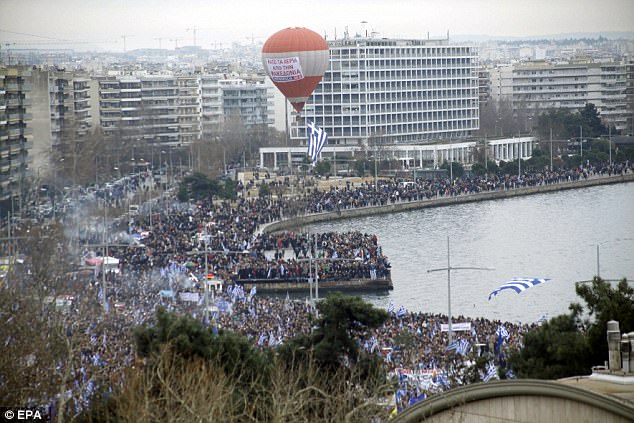 But his coalition partner, defense minister Panos Kammenos, leader of the Independent Greeks party, has taken a hardline stance, saying he wouldn’t accept the inclusion of the name Macedonia, suggesting the neighboring country call itself Vardarska.

Tsipras, who is expected to meet with his Macedonian counterpart Zoran Zaev in Davos next week, said in an interview published on Sunday: ‘If there is an opportunity for a solution, it would be a national stupidity not to make good use of it.’

However, he told Ethnos newspaper that he could understand ‘the concerns and sensitivities’ of the Greeks of the north.

Macedonia is known as the Former Yugoslav Republic of Macedonia (FYROM) at the United Nations, although the Security Council acknowledged this was a provisional name when it agreed to membership.

If a deal is reached at the UN talks, it will be put before Greek parliament for approval, with the government expecting the compromise name to be approved despite opposition within some parties.

According to Macedonian media, Nimetz has proposed five alternatives all containing the name.