Green MP Caroline Lucas apologises after naming her dream, all-female Cabinet to see off a No Deal Brexit after critics slam her for choosing only white colleagues

As the country’s only Green MP, Caroline Lucas came up with an inevitably very right-on proposal to see off a No Deal Brexit – an all-female Cabinet.

But the Brighton MP was given a somewhat painful lesson in political correctness yesterday when forced to apologise for her list of women after it was pointed out that everyone on it was white.

Miss Lucas had urged ten high-profile female cross-party politicians to come together in a Cabinet of national unity.

The Brighton MP was given a somewhat painful lesson in political correctness yesterday when forced to apologise for her list of women after it was pointed out that everyone on it was white. She is pictured at an anti-Trump rally in Whitehall during the US President’s visit

Writing in The Guardian – of course – she said it could ‘bring a different perspective’ and force a no-confidence vote in Boris Johnson to prevent No Deal.

But she apologised yesterday, admitting she was ‘wrong to overlook’ her ‘women of colour colleagues’.

She wrote on Facebook: ‘An all-white list of women isn’t right. I should have reached out further and thought more deeply about who, and what kind of politics, an all-white list represents. I apologise.’

She added: ‘There are women of colour colleagues who are standing up to this Government’s reckless gamble with Britain’s future, and it was wrong to overlook them.’

Her plan was also rejected yesterday by politicians invited to join, and others who weren’t.

International Trade Secretary Liz Truss, who wasn’t, tweeted: ‘Is there anything more sexist than claiming your gender determines your worldview/ behaviour/ attitude?’ 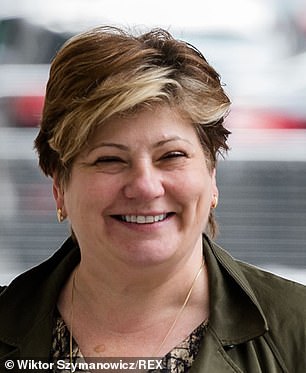 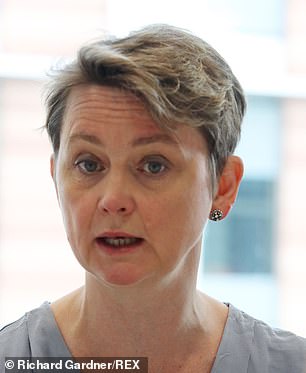 Miss Lucas had suggested the Cabinet could include Labour’s Emily Thornberry and Yvette Cooper, pictured above