Greenpeace has apologised for a stunt that left two Euros spectators needing hospital treatment when a paraglider almost crashed into the stands during last night’s game between France and Germany.

A spokesman said an ‘experienced pilot’ had been intending to fly over the Allianz Arena in Munich and drop a soft ball printed with a slogan denouncing Volkswagen – one of the tournament’s main sponsors – for making petrol and diesel engines.

But a fault with the glider’s electric motor forced him to make an emergency landing inside the stadium, the spokesman added, where he hit an overhead wire which almost sent him crashing into the stands.

The pilot – who has been identified locally as 38-year-old Kai S, a surgeon and known environmental activist from southern Baden Württemberg state – then landed heavily on the pitch, appearing to hurt himself in the process.

Security quickly escorted him off the pitch, with German police saying they are now considering criminal charges. ‘[We have] zero tolerance for political actions that put lives at risk,’ a police spokesman said.

Meanwhile Bavarian premier Joachim Herrmann revealed that snipers were ready to take out the glider thinking he was a terrorist, but held off after noticing the Greenpeace logo and concluding it was a protester.

‘If the police had come to a different conclusion that it could be a terrorist attack, then the glider might have had to pay for the action with his life,’ Herrmann told Bild.

Spectators, officials and journalists take evasive action as the paraglider skims inches over their heads during his botched stunt at the Germany-France game in Munich last night 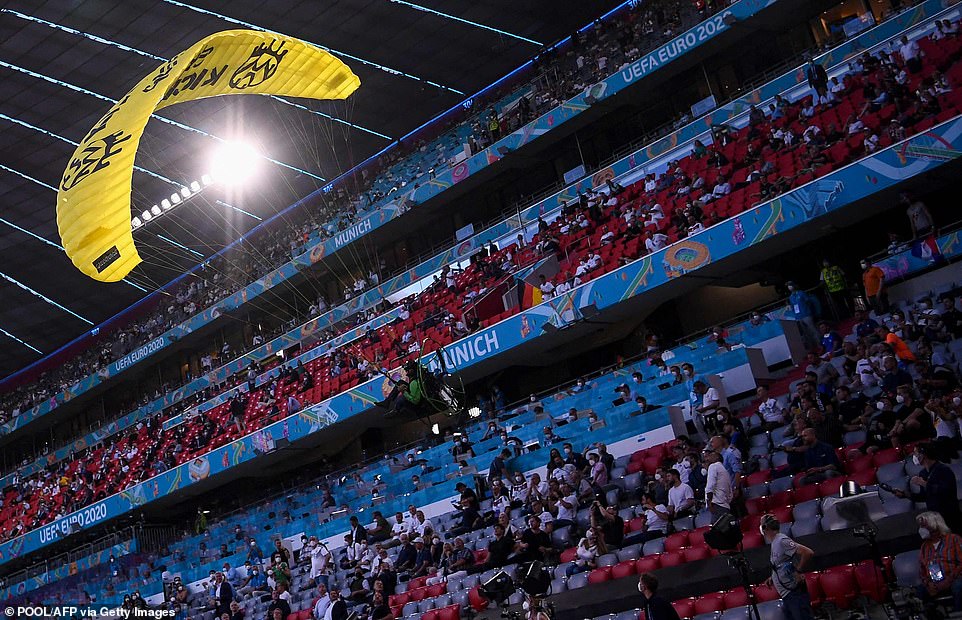 The activist skimmed over the heads of many in the crowd during his botched stunt. Part of his equipment was damaged on the approach and two people suffered head injuries 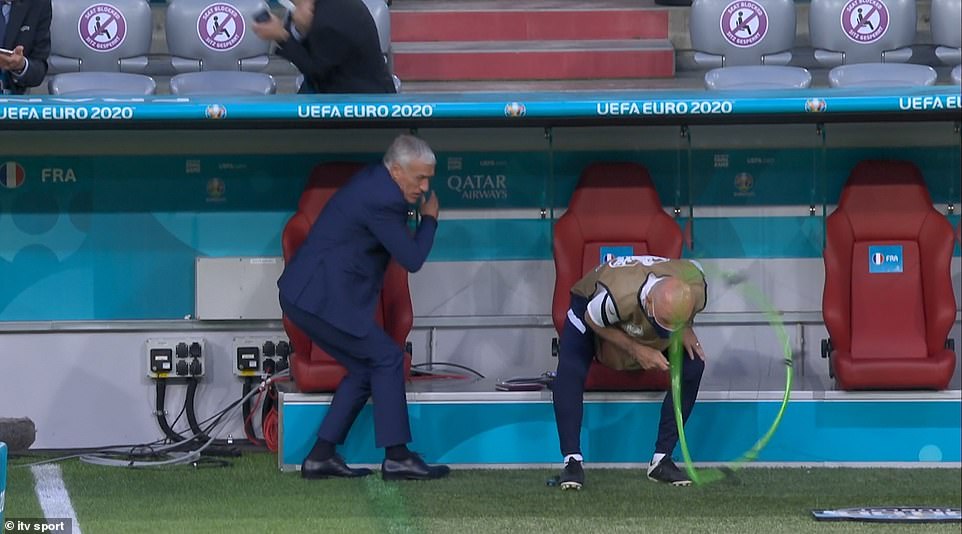 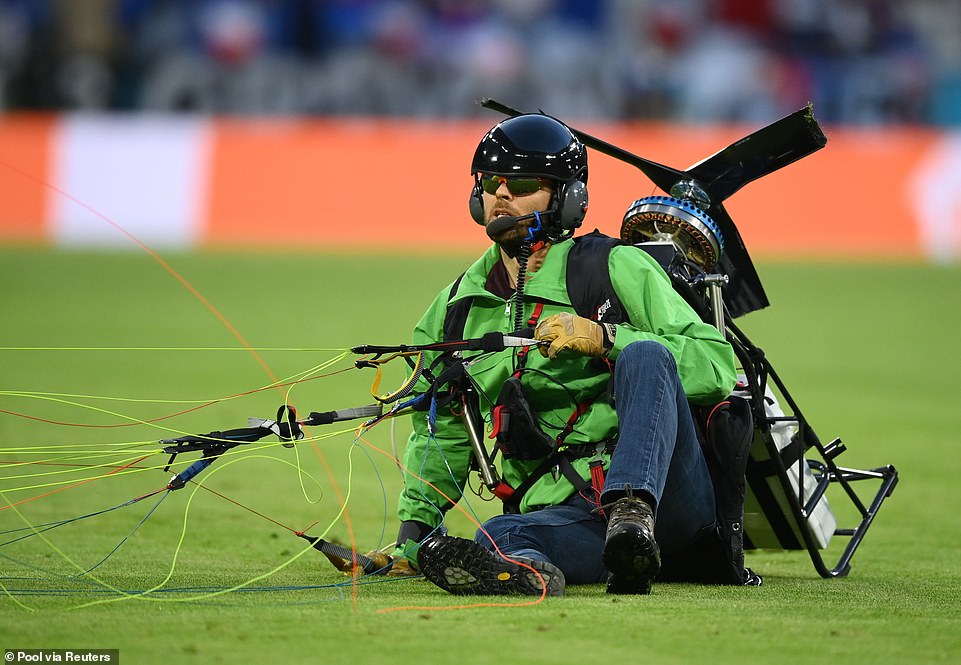 He headed towards the pitch, causing the players to run to safety, as he landed heavily near the German stars 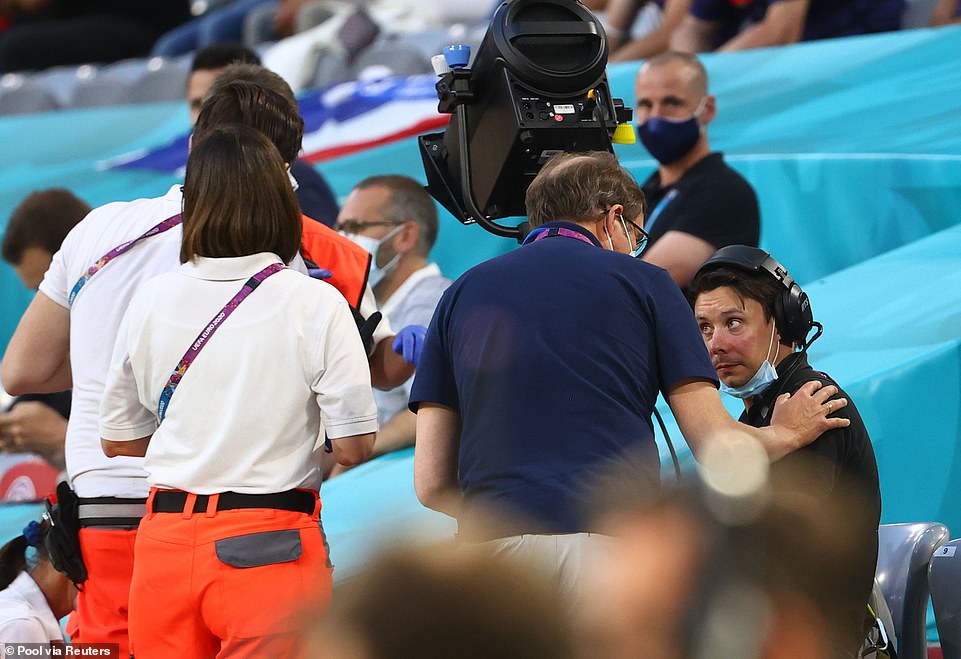 Kai, whose last name was not published by German media, is already known to police for pulling off a similar stunt with two others in Frankfurt earlier this year.

The trio used paragliders to land on the building of the European Central Bank in the city before unfurling a banner that read: ‘Stop funding Climate Killers’. They left after four hours, and were charged with trespassing.

Meanwhile Munich mayor Katrin Habenschaden, who was in the stadium at the time, also condemned the stunt, saying the crash was ‘life-threatening’ and it was only by chance that people were not more-seriously hurt.

Greenpeace attempted to defend the stunt today, saying the ‘very experienced’ pilot had been attempting to fly over the stadium on a glider powered by an electric battery to drop a ‘soft ball’ protesting VW.

The group said an issue with the throttle caused the engine to cut out, prompting the pilot to try and make an emergency landing inside the arena – colliding with an overhead cable used by pitch cameras.

‘Greenpeace Germany offers a full and unreserved apology to those who were injured and impacted as a result of our protest before yesterday’s UEFA football match in Munich,’ an official statement said.

‘We are seeking to verify the extent of the injuries and hope for a quick recovery for all those affected.

‘Greenpeace takes safety very seriously and will mount a full investigation into what went wrong. We will fully cooperate with all relevant authorities.

‘We would like to repeat our full and unreserved apology to those who were injured and impacted as a result of this accident.’

The Allianz Arena, where Bayern Munich play their homes games, was filled with some 14,000 fans at the time of the accident. Its usual capacity is 70,000, but that has been reduced due to Covid restrictions.

‘This inconsiderate act – which could have had very serious consequences for a huge number of people attending – caused injuries to several people attending the game who are now in hospital,’ they added. 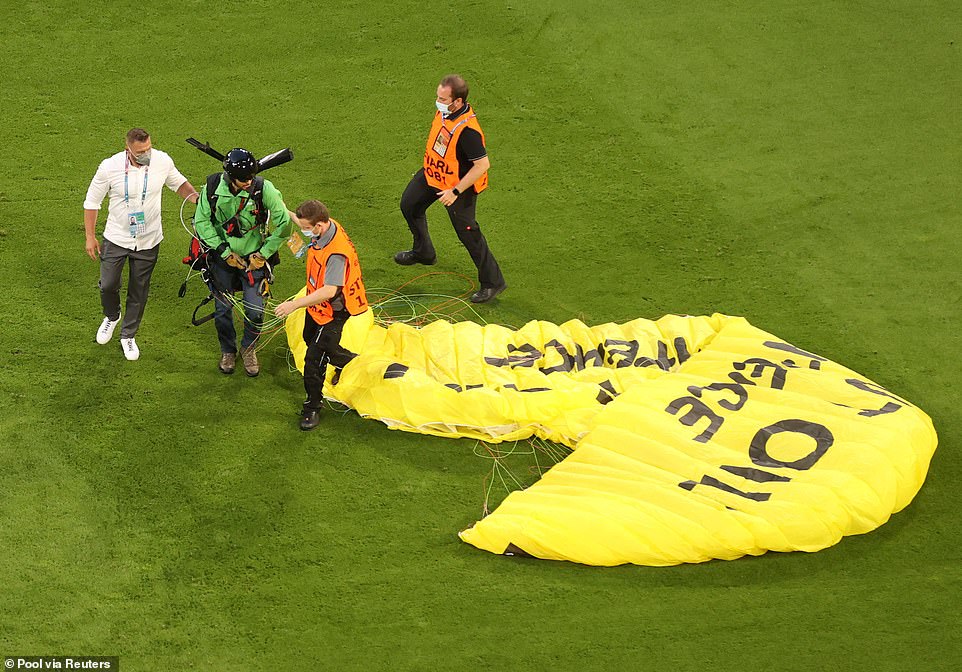 The activist, who had ‘Kick Out Oil’ emblazoned on his yellow parachute, glided into the stadium before losing control. He was hauled away by stewards after the stunt and later arrested 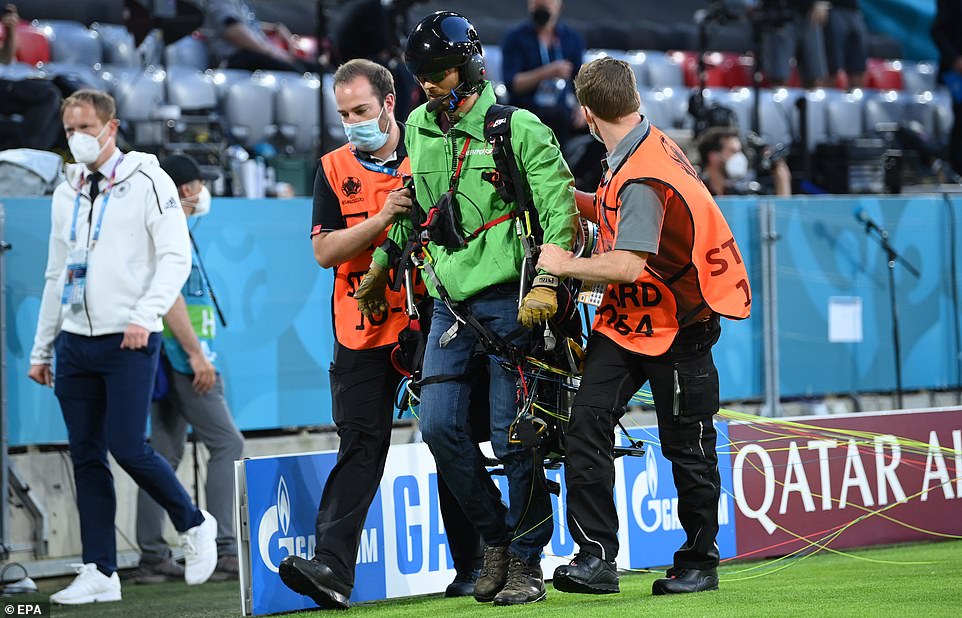 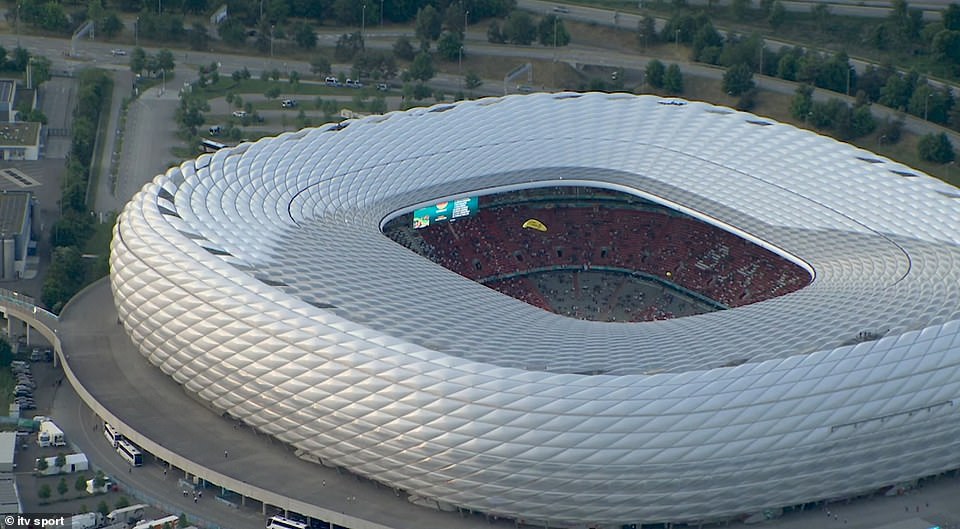 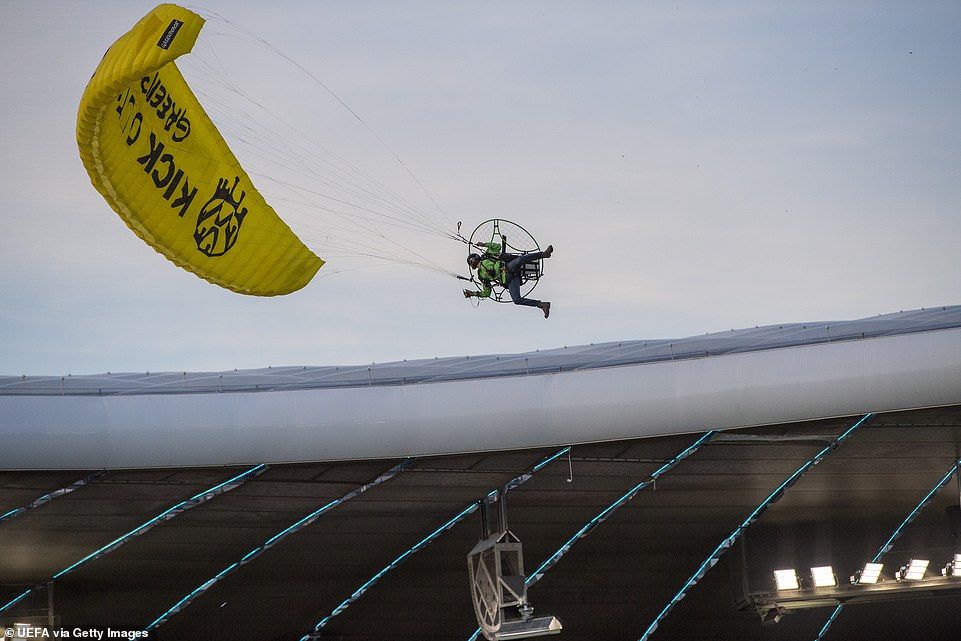 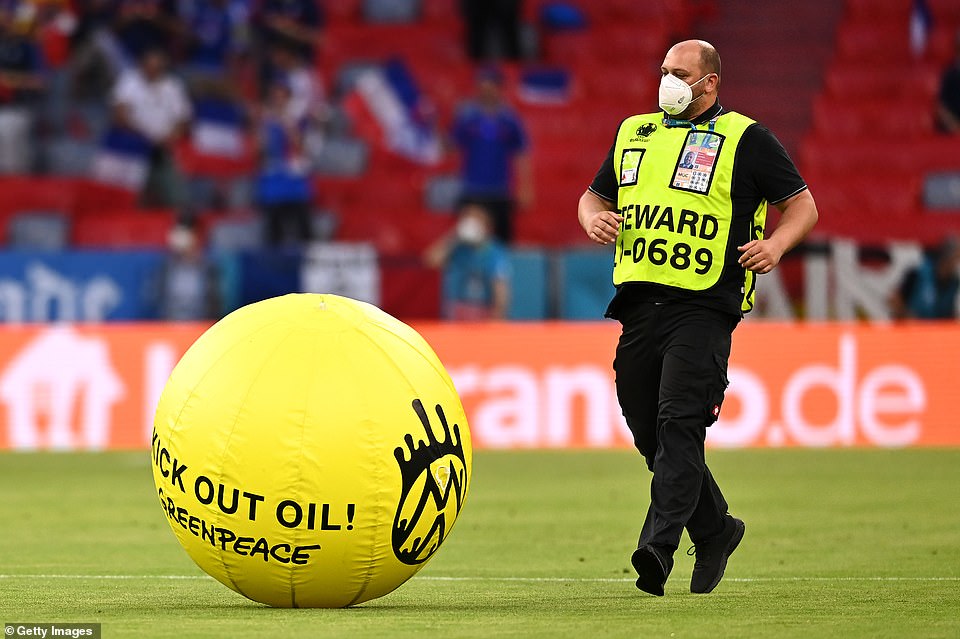 ‘The staging of the match was fortunately not impacted by such a reckless and dangerous action, but several people were injured nonetheless.’

They added: ‘UEFA and its partners are fully committed to a sustainable Euro 2020 tournament and many initiatives have been implemented to offset carbon emissions.’

The stunt took place just as Germany were about to kick off against France in their opening match of the tournament – a game they went on to lose thanks to a first-half own goal by Mats Hummels.

Greenpeace’s stunt is hardly the first sponsor protest to have taken place at Euro2020, even though the tournament has been running for less than a week

On Monday, Cristiano Ronaldo made headlines by removing two bottles of Coca-Cola from a table in front of him during a press conference, urging fans to ‘drink water’ instead.

UEFA responded with a terse statement that said ‘everyone is entitled to their preferences’ while pointing out that the notoriously fitness-obsessed sportsman would also have been offered water.

His protest was followed by copy-cat action from French star Paul Pogba, who – after the France-Germany game had concluded – removed a bottle of Heineken beer from a press conference.

While Pogba has not made the meaning of the gesture clear, it is likely because he is a devout Muslim and Islam considers alcohol to be ‘haram’ – or ‘forbidden’.

However, the bottle he removed appeared to be a 0% alcohol-free beer.

Another protest that has stirred up controversy is the decision of England players to kneel on the field before matches to protest racial inequality – a gesture copied from the NFL.

In response, some fans have been booing the national side while their opponents have also been forced to decide whether to join them in the gesture or stay standing.

It is thought that Scotland will take a knee during Friday’s game between the two sides, but that opponents Czech Republic will not join them when the pair face off next week.