An 11-year-old greyhound that was diagnosed with cancer in 2019, is now in remission and thriving thanks to a new vaccine.

Scientists at the University of Sydney treated the canine, named Kelly, using a sample from the tumor allows for a personalized treatment.

This stimulates the patient’s immune system to combat the cancer, which is also method being developed to treat human cancer.

Kelly is one of 300 dogs that have received an injection, which has shown to not only rid the body of cancer, but prevents it from reoccurring.

An 11-year-old greyhound (pictured) that was diagnosed with cancer in 2019, is now in remission and thriving thanks to a new vaccine

According to The Veterinary Cancer Society, cancer is the leading cause of death in 47 percent of dogs, especially those over 10 years old.

And dogs also have a similar rate of developing cancer as humans.

The vaccine was developed by University of Sydney immunologist Dr. Christopher Weir, who has been working on the treatment for at least three years and was recently able to see the fruits of his labor with Kelly.

Kelly’s owner, Jennifer Wiessel, spotted lumps under her dog’s jaw in 2019, which were eventually diagnosed as lymphoma – an aggressive and fatal cancer in dogs. 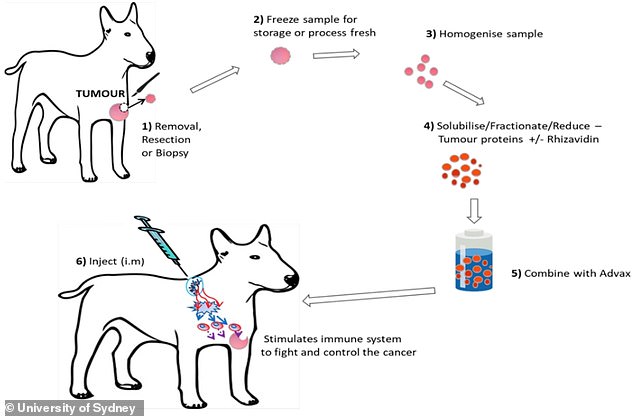 Using a sample from the tumor allows for a personalized treatment that stimulates the patient’s immune system to combat the cancer, which is also method being developed to treat human cancer

Just like humans, Kelly endured rounds of chemotherapy with the hopes radiation treatment would save her life.

However, Weissel knew her loving pet’s chances of surviving the fatal disease were slim – but that all changed when Kelly received Weir’s vaccine.

‘Thanks to the first trial, we now know the vaccine is safe,’ Dr. Weir said in a statement.

‘It appears to work for several different types of cancer – particularly well on MAST cell tumors and lymphoma.’

Dr. Weir approached the vaccine as an immunotherapy, considered to be the most promising cure for cancer in humans.

A biopsy of the tumor is removed from the dog, which is either frozen or immediately processed.

The sample is then combined with Advax, a solution that enhances antibody and T-cell immune responses against co-administered antigens.

The treatment, according to the researcher, is much cheaper than chemotherapy that can cost more than $10,000 per dog.

However, the most promising results were found in dogs that had previously had chemotherapy prior to the vaccine.

‘While chemotherapy alone can prolong survival, it usually does not save the animal’s life, the University of Sydney shared in the statement. 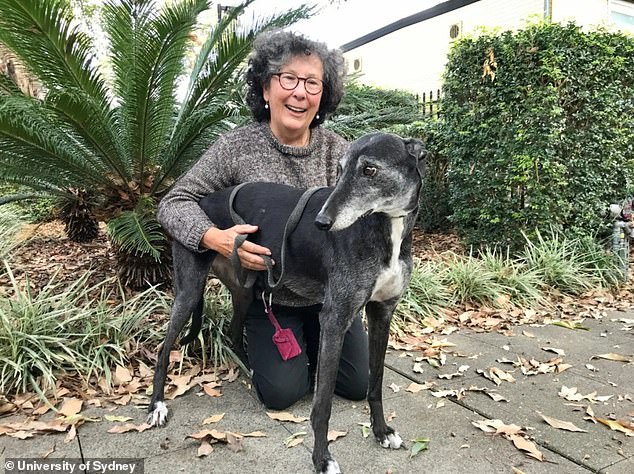 Weissel says the vaccine has allowed her to enjoy Kelly’s Golden Years that she never thought her lovable pet would live to see.

‘I’m grateful we’ve been given the opportunity to take part in this trial. It’s been a blessing.’

Kelly’s treatment is similar to what researchers at the Pritzker School of Molecular Engineering at the University of Chicago have designed for humans.

The vaccine also uses the patient’s own tumor cells to program the immune system to find and attack cancer cells within the body.

The results were published March 24 in the journal Science Advances.

Prof. Melody Swartz, who led the research, said in a statement: ‘This is a new strategy for immunotherapy.’

Larger dog breeds including Great Danes and Rottweilers are at higher risk of BONE CANCER than smaller pups, scientists warn

Osteosarcoma — a painful and aggressive form of bone cancer — is more common in larger dog breeds like Great Danes and Rottweilers, a study has confirmed.

Experts led from the University of Bristol analysed health data on 906,967 dogs to identify those breeds and characteristics that might increase the risk of the cancer.

The team found that larger, heavier dogs and those with longer legs and skulls are typically at a greater risk of developing osteosarcoma.

The findings could help pave the way to new therapies for dogs suffering from osteosarcoma, and may also inform treatments for the bone cancer in humans.

‘There are increasing concerns about the wisdom of breeding dogs with extreme body shapes such as flat-faced breeds like French Bulldogs or breeds with long backs such as Dachshunds,’ said paper author Dan O’Neill.

‘This study highlights the health risks from another extreme body shape – large body size,’ the animal epidemiologist from the Royal Veterinary College added.