The families of two teenagers whose bodies were undiscovered six hours after a crash have spoken of their heartbreak at their loss.

Ella Alford and Aimee Clayton were found dead in the wreckage of a car after it ploughed into trees on the A30 near Basingstoke, Hampshire.

Police believe their Fiat 500 car collided with trees at about 10.35pm on Tuesday, but the vehicle was not discovered until just before 5am the following morning near to the Hatch pub in Old Basing.

The car of the teenagers ploughed into trees on the A30 near Basingstoke, Hampshire 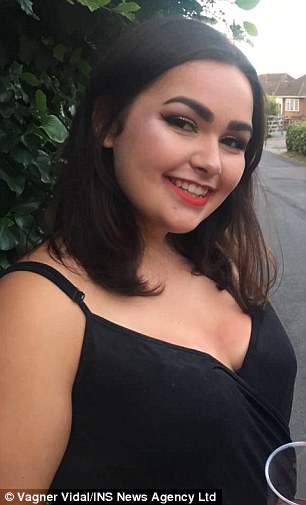 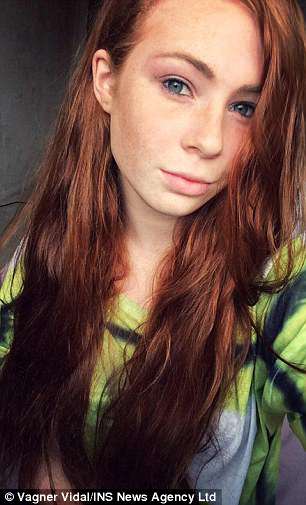 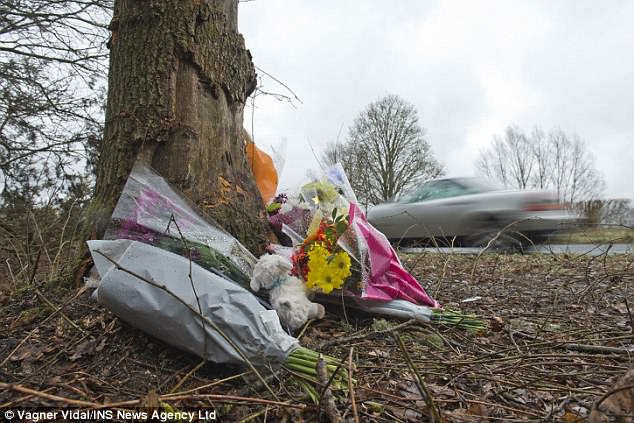 Floers at the scene of the crash – police on Thursday confirmed that the accident happened at 10.35pm on Tuesday evening and that Ella Alford was the driver of the white Fiat 500

The family of Alford, from Basingstoke, said in a statement: ‘No words can ever express the sorrow and heartbreak we feel as we try to come to terms with the untimely and tragic loss of our beautiful, selfless daughter, granddaughter, sister, niece and cousin.

‘Our kind, funny girl, with the biggest heart, who always put everyone else before herself.

‘A tragic loss to our family and the many friends whose lives she touched, she leaves a hole that can never, ever be filled. 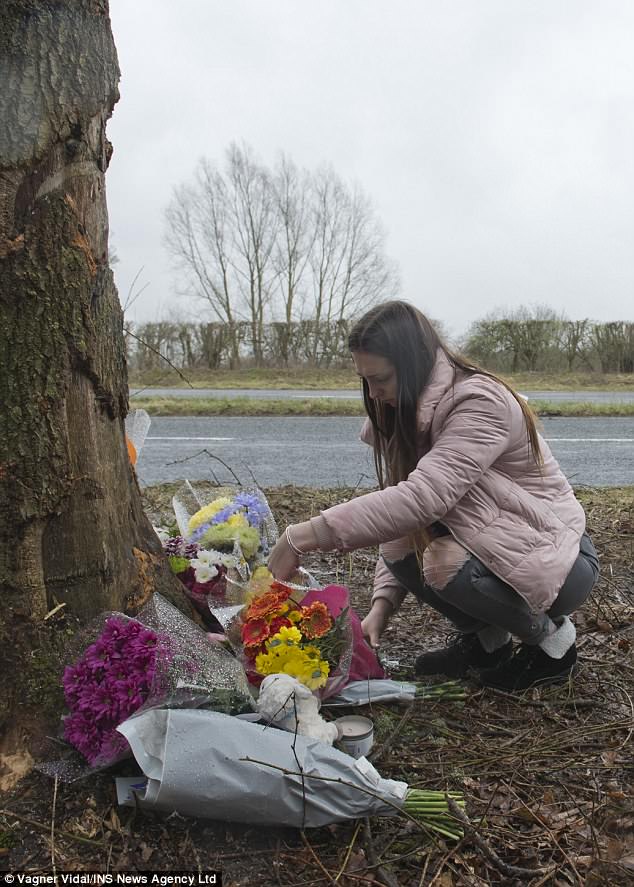 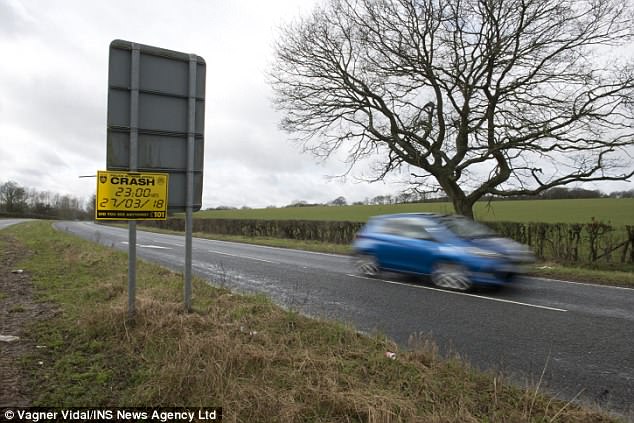 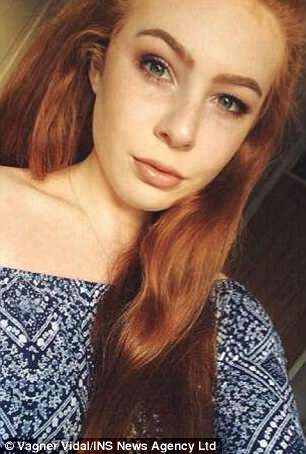 The pair were students at Peter Symonds College in Winchester, Hampshire, where the headteacher has spoken of pupils’ grief

Clayton’s family, from Hook, said: ‘Our beautiful Aimee, our angel, such a unique and amazingly gifted soul who always had time and patience for anybody, destined for great things, but taken far too soon.

‘She will be greatly missed by all who knew her and we as a family are left bereft’.

Police on Thursday confirmed that Ella Alford was the driver of the white Fiat 500 – but it could not be confirmed as to whether she and passenger Aimee Clayton died instantly after the crash or died from their injuries while trapped.

A pathologist will carry out a post-mortem examination on the two teens next Thursday by the North Hampshire Coroners’ Office which should reveal more information as to the time of death.

A Hampshire police spokesman said earlier: ‘Investigations into the exact circumstances of the collision are ongoing and officers believe the collision happened around 10.35pm.

‘We are still keen to speak to anyone who was travelling along that road.’

The 18-year-old driver and her passenger, also 18, were found by a passing motorist near The Hatch pub in Basingstoke at 5am today. It is understood they were last seen before 10pm the previous evening.

Police and paramedics were scrambled to the scene but officers believe they could have been dead for some time.

The pair were students at Peter Symonds College in Winchester, Hampshire, where the headteacher has spoken of pupils’ grief.

A male student who was in Aimee’s A-level Psychology class on Wednesday described her as ‘the nicest person you could meet’.

He said: ‘Aimee was in the same class as me and was just the nicest person you could meet. I didn’t know much about her but she was a lovely person who you couldn’t say a bad word about.

‘She wasn’t loud, she would just get on with her work, but would be nice to talk to.

‘Once when I needed help, as I didn’t understand something, she was so nice – she ran me through everything and helped me understand it, which really helped.

‘I can’t believe that she’s gone. It really makes you think about how precious time really is and that one moment you can just be take away.’

Friends of the pair this evening began laying flowers at the spot where they lost their lives.

Mr Carville said the college, which has almost 4,000 students between the ages of 16 and 18 across two sites, was ‘deeply saddened’ at the news.

He said: ‘We are deeply saddened to hear of the loss of two of our students. They both had such bright futures ahead of them.

‘We will be doing our very best to support our students.

‘In time, we will talk to the students and parents about the best way that we can celebrate the lives of these girls and find some way of creating a lasting memorial.’

Peter Symonds, a state sixth form college, was opened in 1987 and teaches A-Level courses to students from across Hampshire.

Many children of British Forces service personnel based in Germany and Cyprus board at the college, as well as students from the Falkland Islands. 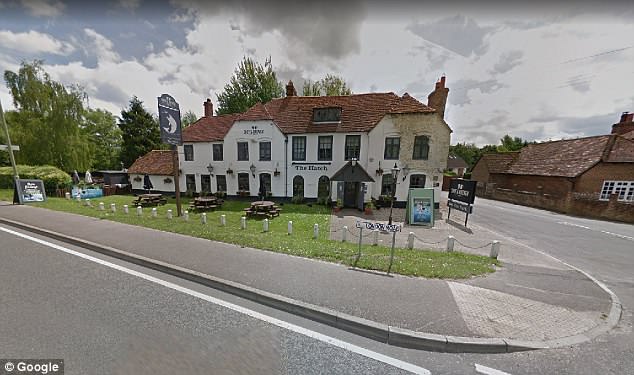 The 18-year-old driver and her passenger, also 18, were found by a passing motorist near The Hatch pub (pictured) in Basingstoke at 5am today

Hampshire Police is looking to speak to anyone who may have captured the crash that resulted in the girls’ death on their dash cams. They were in a white Fiat 500.

A spokesman for Hampshire Police urged anyone who may have passed the scene between 9.50pm last night and 5am today to contact them urgently.

‘We’re appealing for witnesses following a fatal collision in Basingstoke this morning,’ said the spokesman.

‘Officers were called just before 5am after a member of the public reported seeing a vehicle on the side of the A30 eastbound.

‘The car, a white Fiat 500, had collided with trees just past the Hatch public house.

‘The driver of the vehicle and her passenger, both 18-year-old women, one from Basingstoke and one from Hook, were pronounced dead at the scene. 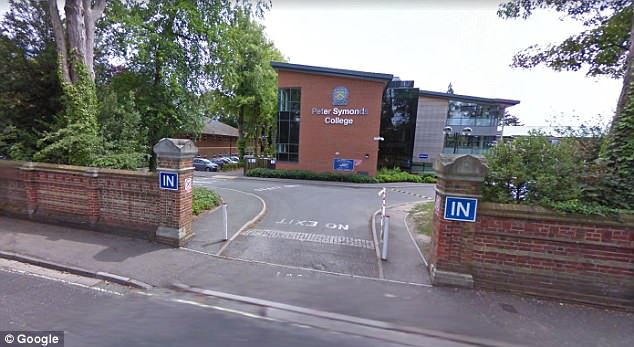 The pair were students at Peter Symonds College in Winchester, Hampshire (pictured), where the headteacher has spoken of pupils’ grief

‘Sergeant Andy Noble, from the Joint Roads Policing Unit, said officers would like to hear from anyone who drove eastbound around the same time on the same road where the accident took place .

‘We particularly want to speak to anyone who has done that journey who has a dash cam, as we believe this will help us to narrow down the time of the incident.

‘We would also like to speak to anyone who saw a white Fiat 500 driving in the area between those times, so please get in touch.’