Grimes says she has undergone experimental surgery to eliminate all blue light from her vision by removing the top film of her eyeball and replacing it with an orange layer that she made in a lab.

The 31-year-old Canadian singer, whose real name is Claire Elise Boucher and is currently dating eccentric Tesla CEO Elon Musk, said the procedure was ‘a means to cure seasonal depression.’

The bizarre claim was one of many in an Instagram post on Monday promoting her new collaboration with Adidas, in which the brand asked her: ‘tell us about your training regime.’

As for the most invasive aspect of her regime, the eye surgery, ophthalmologists are baffled and concerned.

‘Whatever this surgery it is unnecessary and a terrible idea,’ Dr Morris Waxler, PhD, the FDA’s former chief research scientist and an expert on the risks of LASIK eye surgery, told DailyMail.com.

‘Goggles, medications, and time scheduling of exposure to sunlight should be sufficient to treat seasonal depression. Why would any ethical surgeon perform any such surgery is beyond me? I hope this is someone’s bad joke.’

What’s more, Dr Waxler warns, eye surgery has strong links to suicide: in 2008, the Food and Drug Administration (FDA) held a hearing about how LASIK (laser eye surgery) had driven some patients to take their own lives.

Indeed, in December, the issue came up again, when meterologist Jessica Starr took her own life following the procedure, after posting on social media: ‘I am struggling a little bit so I need all the prayers and well wishes. This is a hard go. If you have any tips I’d appreciate it, I’m trying to stay strong and get through this recovery.’

With LASIK or SMILE, a marginally less invasive version, ophthalmologists use a laser to cut through the top layer of the eye to get at the damage cornea, but an imperfect zap can quite easily cut through a cluster of densely-packed nerves, triggering excruciating pain, dry eyes, and mental health effects that we don’t yet fully understand.

With only Grimes’ post to go on, it is not clear how serious she is being about this supposed surgery – or any other aspect of her regime. (Does it take 25 minutes to boil tea?).

Based on her description, Dr Waxler says it’s hard to determine whether such an ad-hoc surgery would carry the same risks as LASIK.

‘I have no idea how deep they are cutting into the cornea or what exactly these butchers are doing,’ he said.

Seasonal affective disorder (SAD), which affects up to three million Americans a year, is triggered by dwindling daylight hours.

As rates have risen – about 40 percent in the last decade – researchers have learned more about light’s relationship with our mood.

Direct light from the sun has a profound and positive impact on our photoreceptors, tapping into the emotional center of our brains.

Indirect light from cell phones, computers and artificial light appears not only a poor replacement, it is actively detrimental – and, in some people, with severe side effects.

That light is often referred to as ‘blue light’, because it travels on blue wavelengths. During the daytime, it can boost your attention and even your mood, but at night it can confuse your muscles and synapses, and that disarray can be forceful.

Typically, SAD is treated with light therapy – patients can be prescribed a glowing box of warm light to offset the harsh lights that are turned on during dwindling daylight hours.

But, ironically, one of the most promising new treatments is ‘blue light therapy’, exposing patients for 45 minutes a day to ‘narrow-spectrum blue light’ via an LED to suppress the levels of melatonin (a sleep-inducing hormone) – a technique that may not work for Grimes if, indeed, she can no longer see blue. 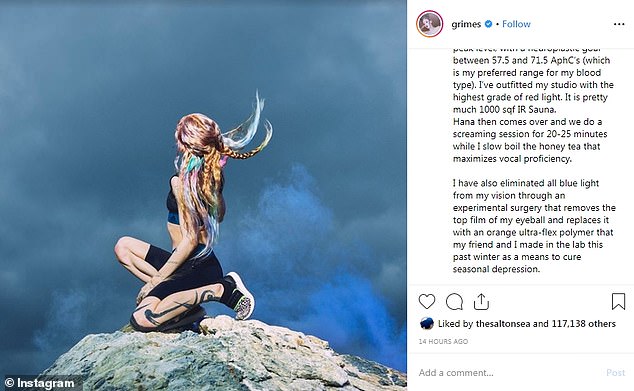 The bizarre revelation was one of many in an Instagram post on Monday promoting her new collaboration with Adidas, in which the brand asked her: ‘tell us about your training regime’

Grimes is the new face of Stella McCartney’s collection for Adidas.

‘Grimes is the perfect embodiment of the adidas by Stella McCartney core values,’ McCartney wrote on Instagram, announcing the collaboration.

‘She is passionate and outspoken about protecting the planet, and a true trailblazer for pushing creative boundaries and inspiring women to unlock their potential in all aspects of their lives.’