A gripping new book written by a First World War front-line officer and featuring insightful photographs of fighters on both sides describes the rough life of a British soldier during one of history’s deadliest conflicts.

While others show a group of Yorkshire and Lancashire soldiers in their army uniform in France, 1916.

The book, entitled We Were A Band Of Brothers, also features a photograph of German soldiers operating a machine gun in a strongpoint, from which they could spray no-man’s land and any British infantry attack with bullets.

British soldiers pose for a photograph during the First World War. It is one of several fascinating pictures that feature in We Were A Band Of Brothers 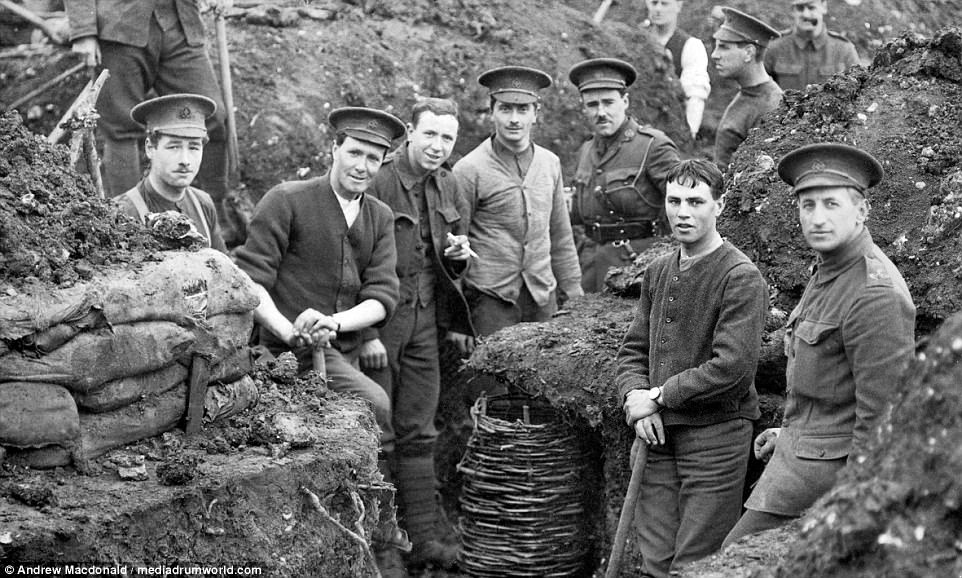 West Yorkshire soldiers in a training trench in England. The Great War is one of history’s deadliest conflicts with more than 18 million people believed to have been killed 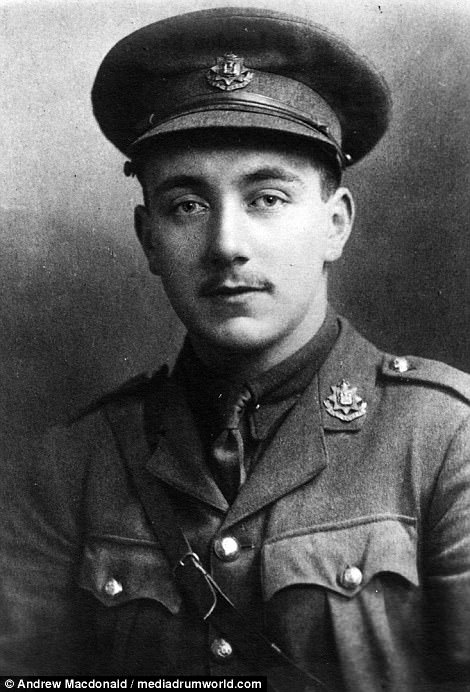 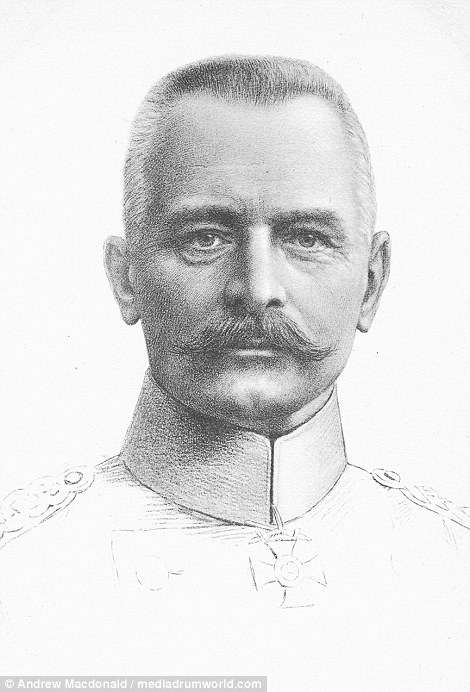 We Were A Band Of Brothers tells the story of Captain Philip Heath, left, in his own words. Pictured right: A drawing of Erich von Falkenhayn who served as Chief of the German General Staff for part of the war 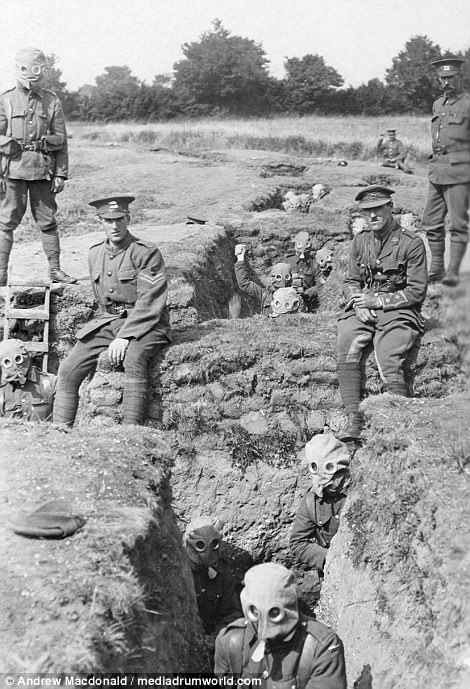 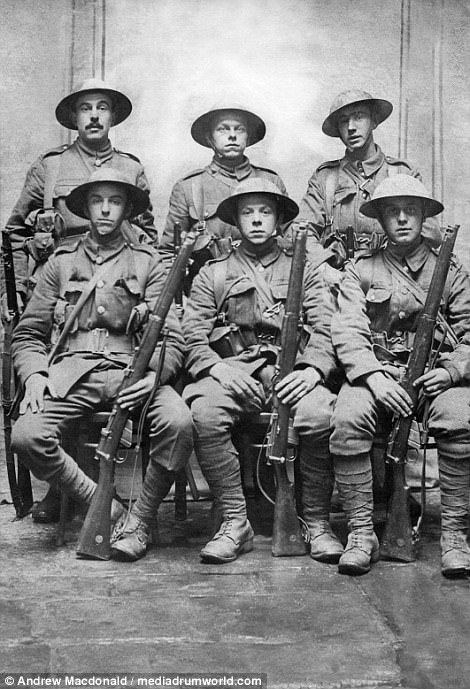 British soldiers training in gas masks, left, and right, Yorkshire and Lancashire soldiers in France in 1916

It tells the story of Captain Phillip Heath, a front-line officer who survived the blood lettings of the Somme in 1916, Passchendaele in 1917 and the Hundred Days Offensive in 1918.

His path through the killing fields of the First World War is told in his own words.

He writes: ‘I had the feeling, which I believe was shared by the others that we were a band of brothers so that every death in action of a man became a personal loss to us all.

‘My deepest private fear was that I might unexpectedly disgrace myself, and endanger the men I command, by breaking down or losing my head.’

Writing about an incident at Schwaben Redoubt near Thiepval in northern France, a notorious corner of the Somme battlefield in 1916, he said: ‘I have never seen such a dreadful sight as that trench, which was about one-hundred yards long. It was crammed with corpses and bits of corpses scattered all over the place.’

The Redoubt was a German strong point, a key point in a defensive fighting position which is the focal point of the overall defence line.

It formed part of the German defensive system in the Somme sector of the Western Front during World War I, consisting of machine-gun emplacements, trenches and dug-outs. 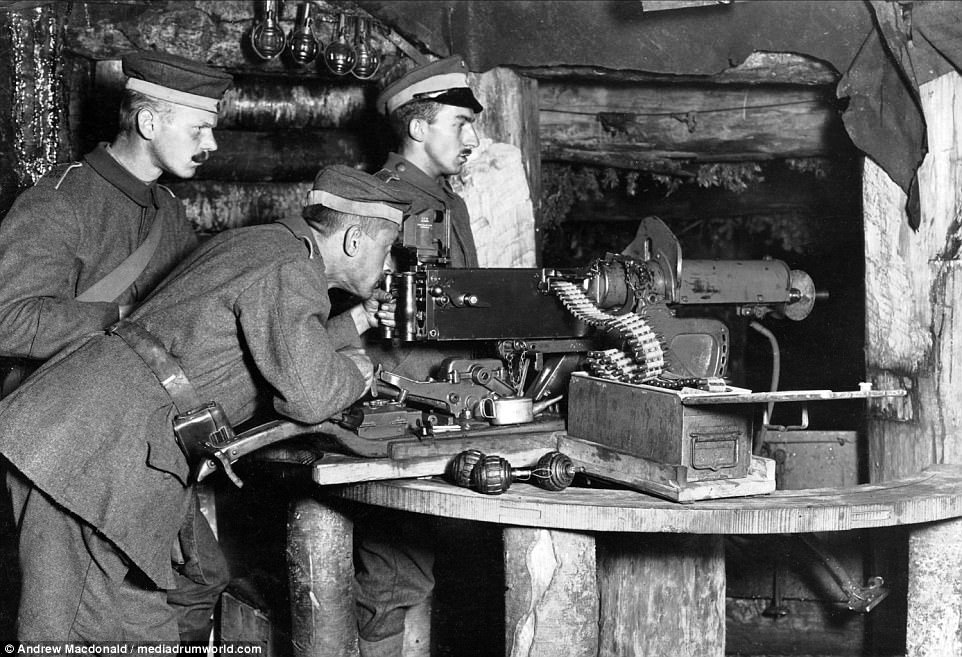 German soldiers aim a machine gun in a dugout. The weapon would be used to spray bullets into no mans land to shoot down enemy soldiers 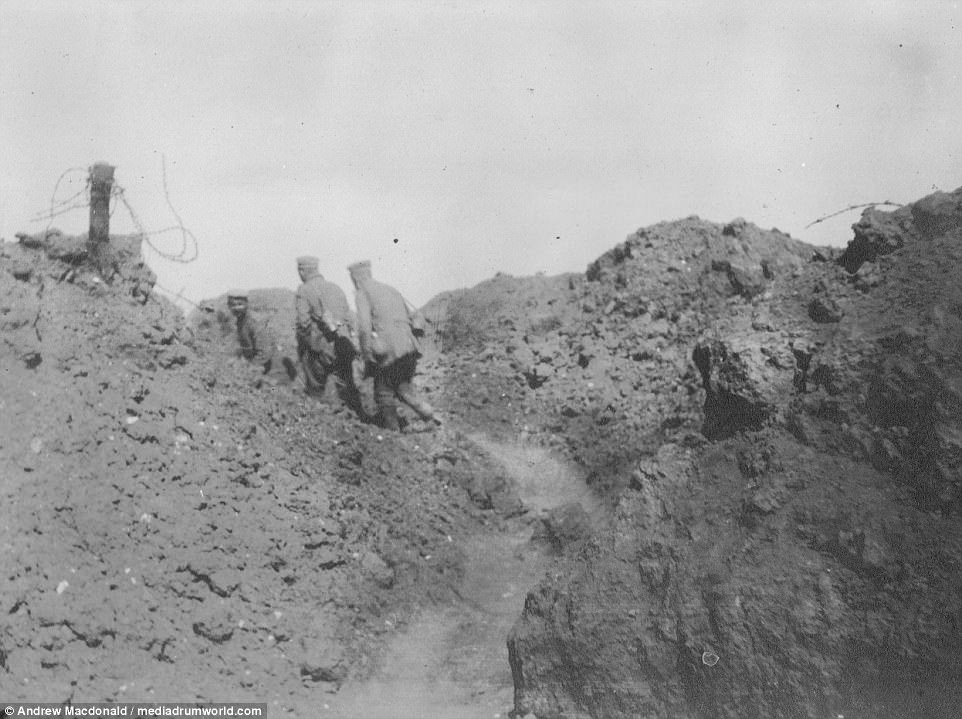 German soldiers walk through a trench on the battlefield. The book describes the rough life of a soldier fighting in the conflict 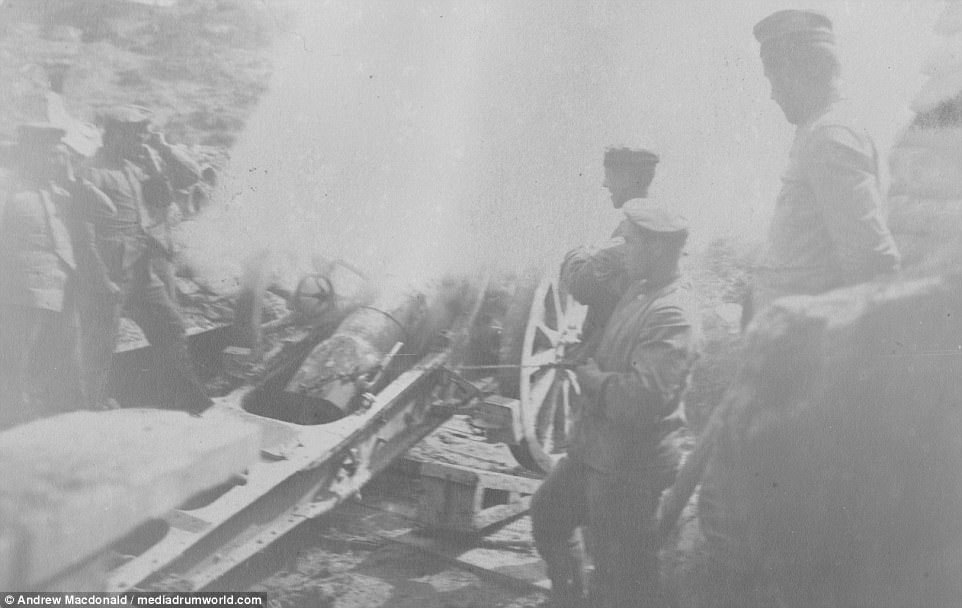 German soldiers fire artillery at the other side. Germany surrendered to the allies and the war ended in November 1918

It was defended by the 26th Reserve Division, from Swabia in south-west Germany, which had arrived in the area during the First Battle of Albert in 1914.

The book’s Foreword was written by author and former journalist, Andrew Macdonald.

He writes: ‘We Were A Band Of Brothers is the story of one man’s war, but it could also be any man’s and for that reason it is essential.’

Dr Macdonald has also interviewed a good number of veterans of the First World War when he was a young man. Many of these men had fought on the Western Front, often not far from Captain Heath.

‘By the time I met them, I was in my late teens and they were aged nearly one-hundred and in some cases older. I heard their stories and I saw the scars of bullet, bomb and bayonet on their limbs,’ Dr Macdonald said.

‘For me the First World War is not some sepia-toned story devoid of personality. For me it is rich with colour and personality.

‘I know what it is like to sit with a veteran of the trenches and share in a joke, and to also at times to have seen the horror and grief that occasionally flashed back to these old men from the trials of their youth.’ 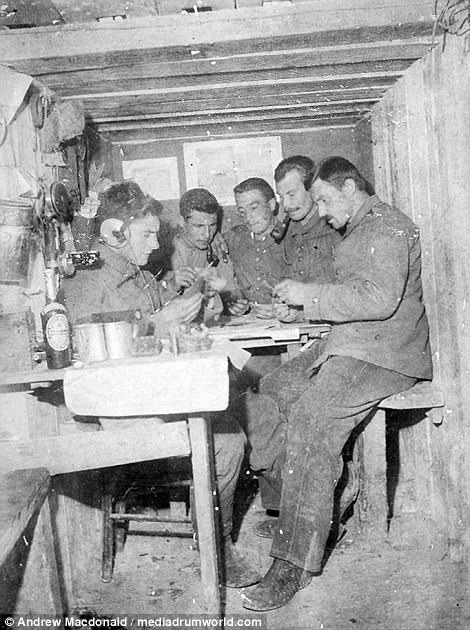 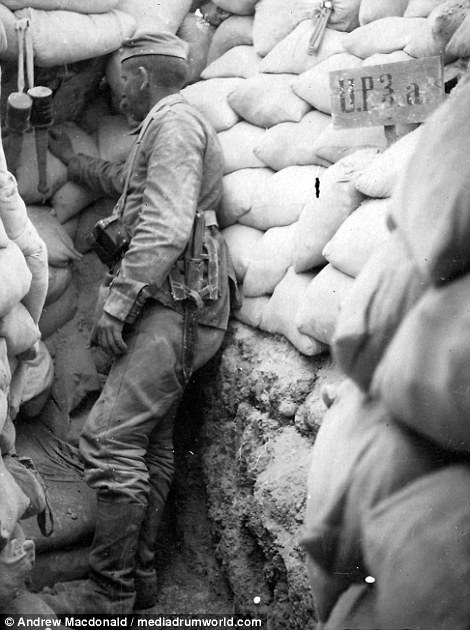 German soldiers play cards and smoke in a dugout during the Battle of the Somme, left, and right, a German soldier patrols a trench 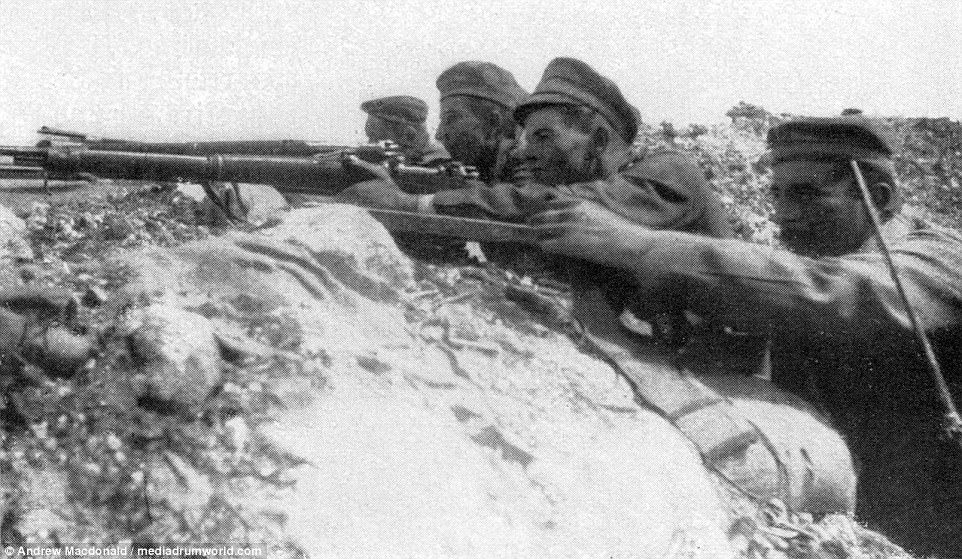 German soldiers shooting across the trenches on July 1 1916 as the Battle of the Somme began. The day was the bloodiest of the battle as 19,240 British soldiers died 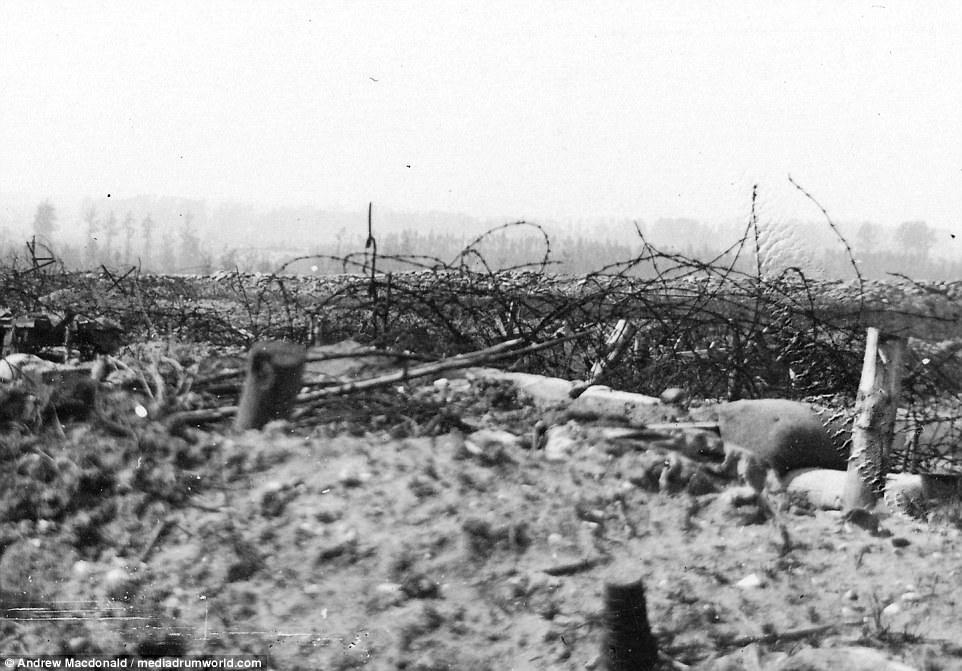 A German trench covered in barbed wire in 1916. The book tells how Captain Heath survived the blood lettings of the Somme in 1916, Passchendaele in 1917 and the Hundred Days Offensive in 1918