Gross experiment shows how smoking and vaping each affect the lungs

E-cigarettes are billed as less harmful than combustible cigarettes, yet eight people have died of vaping-linked illnesses, and even doctors are divided over the controversial and trendy devices.

One team of scientists at New York University recreated the UK’s National Health Services’s viral experiment using cotton balls to show the damage done to lungs by smoking and vaping, respectively in a CBS video.

The vaping simulator was left clean, once again, despite the slew of 530 vaping-linked lung illnesses and eight deaths in the US.

Other doctors warn not to be fooled by the fact the devices may do less harm in the short-term than their combustible predecessors.

They cite not only the mysterious respiratory illnesses, but studies on the cardiovascular effects of vaping and the ‘lie’ that e-cigarettes use water vapor – when, in fact e-liquids rely on a harmful petroleum solution.

Two bell jars full of fluffy white cotton balls sit side by side on a lab table at New York University.

These are you lungs.

On the left are your lungs if you take up vaping, which has now been linked to 530 suspected cases of a ‘new lung disease’ in the US.

On the right are your lungs if you smoke cigarettes.

Lab assistants to Dr Terry Gordon, an NYU professor who studies how pollutants affect cardiopulmonary health, start up the machines, having each ‘smoke’ their respective vice while smoke or vapor is sucked into a vaccum tube and into the bell jars, mimicking inhalation of either.

Predicting the outcome of the experiment, Dr Gordon told CBS, ‘it’s going to get very yucky,’ in the cigarette bell jar.

‘You’re going to see lots of brown and dark color and that’s going to simulate what goes into the lungs of people who vape.’

After hours of  ‘smoking,’ the results are obvious.

The cigarette-exposed cotton balls are a putrid mustard color, and reek.

When rubbed against white paper, the tar from the cigarettes leaves an sickly brown trail.

The cotton balls from the vaping bell jar, on the other hand, were relatively clean.

So was the NHS claim that vaping is 95 percent less harmful than smoking true?

‘I think that’s fairly accurate,’ said Dr Gordon – at least by the measure of the cotton ball test.

But Dr Mark Olfert, who studies the long term effects of vaping on the hard and blood vessel system, says that this simulation doesn’t nearly capture the full scope of the effects of e-cigarettes. 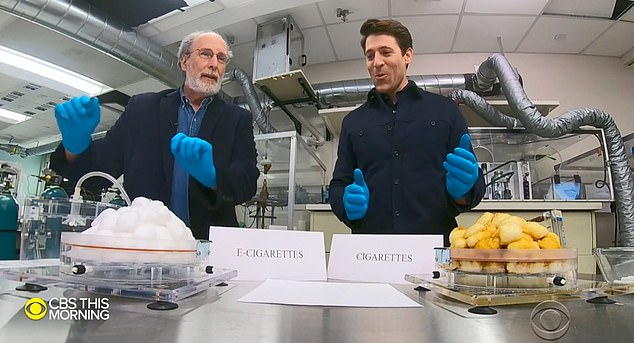 His current work is looking into the possibility that pregnant women’s e-cigarette use could harm their babies as well, and how vaping may affect the blood vessels that feed the brain.

‘We know the damage to lung structure itself is probably minimal,’ he says.

To focus on the ways that vaping doesn’t affect the lungs, he says, ‘misses the point. What if people get strokes, heart attacks, etc.’

Dr Olfert says his research so far suggests that cigarette smoking and vaping have the same effects on the cardiovascular system.

But, he suggests, the relationship between each vice and the lungs and blood vessel system, respectively, might be switched.

‘But I think e-cigarette [use] is going to be a primary vascular disease and come with pulmonary effects. It flips that paradigm.’

He seems fairly certain that the acute lung illnesses US health officials are investigating are not indicative that most vaping products are going to do major lasting damage.

Instead he thinks it’s mostly the addition of other substances to stock e-liquids are leading to the acute lung illnesses that have killed eight. 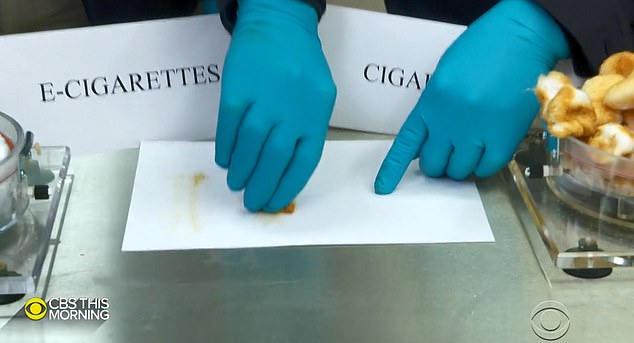 While the cotton balls exposed to e-cig ‘vapor’ were merely wet, the cigarette ones were so saturated with tar and toxins they left streaks on clean white paper

‘If the act of vaping itself could do this acute lipoid pneumonia, we would have seen it a decade ago,’ says Dr Olfert.

‘When you add oils or lipids like vitamin E oil and they’re atomized they;re breaking down into chemicals and compounds that the lung is reacting to.

‘Oil is not very water soluble, so it gets in the lung and can hang out for a long time and cause an accute inflammatory response in young people who don’t have a history of lung disease.’

‘It’s not necessarily an an indictment against the general [vaping] industry but really pertains to adding THC and CBD and other compounds not being sold that way.’

But he also notes that the ‘vapor’ is not vapor. Although there is water in e-liquids, it’s a small fraction of their make up.

Instead, the white color of what comes from e-cigs indicates that they are not water. The resulting substance is a ‘humicant’ says Dr Olfert.

E-liquids are made primarily of oils and glycerin. When these get heated they ‘break down into chemical components, like formaldehyde and acrylene that cause cancer,’ he says.

‘It’s safe to eat these, but that doesn’t mean it’s safe to bring them into your lung. 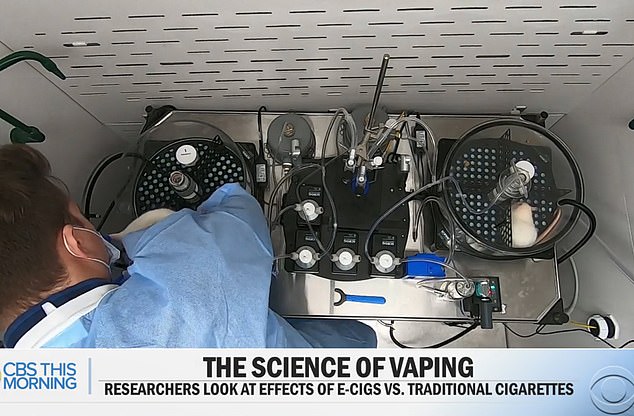 In Dr Mark Olfert’s lab at West Virginia University, assistants exposed rats to e-cigarette vapor and found that they’re blood vessels hardened in the same way those of animals exposed to cigarette smoke do 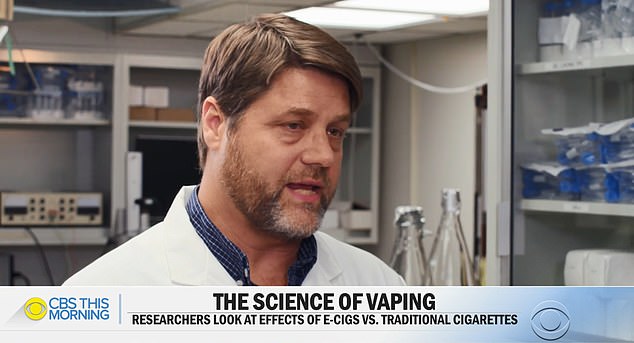 Dr Olfert warns that his research suggests that while vaping may not carry the same long term lung risks that smoking does, it’s by no means safe

It may be years before we know exactly what those chemicals do, but Dr Olfert says there’s no doubt in his mind the overall effects of vaping cannot be ‘safe’ in the long run.

‘I find it really baffling that so many medical professionals are so single-minded about what “safe” means,’ he says.

‘I’m not a crusader on a mission to get e-cigarettes banned – though I wouldn’t be opposed – I just think people are getting the wrong message.’

In other words, just because vaping might be safer for the lungs, doesn’t mean it’s safer on the whole.

‘When you look at the blood vessels of a smoker and an e-cigarette user, they look exactly the same. If your car breaks down, you don’t care why, you just want it working,’ says Dr Olfert.

‘If your body breaks down, it’s a huge inconvenience whether it’s because of your lungs or you heart.

‘To naively say, I’m not going to get lung disease so I’m going to keep doing this because nothing else matters…it sort of defies logic in every realm I could think of.’