A group of young people dressed up as Nazis in a Coles supermarket insisted wearing the uniforms was a ‘only a joke’.

Two women and two men, understood to be aged in their early 20s, were captured entering the Woodend store, north of Melbourne, about 12pm on Saturday October 26.

A CCTV image of the group, obtained by The Age, shows the group don matching black uniforms, with swastika armbands and the imperial eagle.

Witness Craig MacKenzie said he believed the group were on their way to a party.

‘Once in the supermarket, I said to them that they were being highly disrespectful and had no idea what their uniforms meant,’ he told the publication.

A CCTV image of the group shows the group don matching black uniforms, with swastika armbands and the imperial eagle

‘The blokes told me that it was ‘only a joke’ and to f*** off. I persisted, saying that there could be people here who went through World War II and the Holocaust.

Other shoppers were intimidated by the incident, Mr MacKenzie added.

Chairman of the Anti-Defamation Commission Dr Dvir Abramovic, who has been spearheading a national campaign to ban public displays of the Nazi swastika, condemned the sighting.

‘This is beyond revolting, and for many would be as frightening as being confronted by a gun,’ he told Daily Mail Australia.

‘The wearing of the Nazi uniform is an incitement to violence and murder, it is a call for a world without Jews, plain and simple.

‘Once again, we see antisemitism and neo-Nazism on full display, promoted by Hitler worshippers, and we condemn in the strongest possible terms this abominable act of intimidation which recalls Nazi scenes from Germany of the 1930s.’ 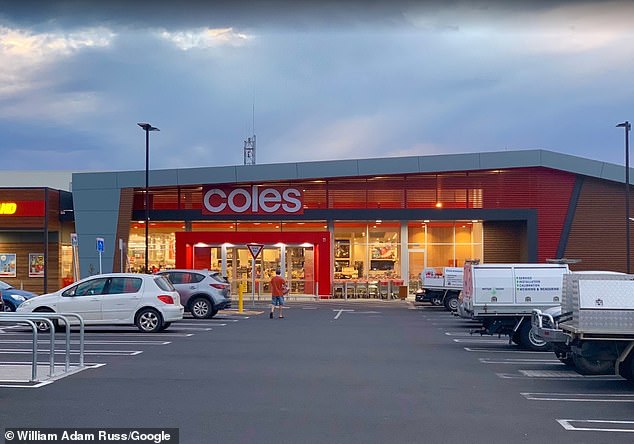 Two women and two men, understood to be aged in their early 20s, were captured entering the Woodend store, north of Melbourne, about 12pm on Saturday October 26

‘It would tear a hole in their heart, and would put them on edge since you know that those individuals who walked into a supermarket, might harbour the same malevolent intention as those promulgated by the Nazis who almost wiped out an entire people,’ he said.

‘There are dark and menacing clouds of bigotry and white-supremacism gathering in our nation, and this rising tide of hate should be a cause of grave concern.

Dr Abramovic added the display was an important reminded to ‘stand together against dangerous ideology’.

The revelation of the Coles incident comes before the Executive Council of Australian Jewry releases a report on anti-Semitic incidents in Australia over the past year on Monday.