Terrifying CCTV footage shows the moment a gunman opened fire on a gang rival’s house leaving neighbours diving for covers in a drive by shooting on a residential street in Birmingham.

Footage captured two loud shotgun blasts and smoke pouring out of a property that had been attacked with baseball bats just an hour before.

A neighbour’s CCTV camera showed a car pull up outside the house in Bordesley Green, Birmingham, at around 11.30pm last Wednesday.

In the space of 20 seconds a car pulls up, three masked thugs armed with baseball bats get out and proceed to smash the front windows of the property, before returning to the vehicle and speeding away.

An hour later two neighbours can be seen talking on their doorsteps, before a gunman leans from the window of a passing people carrier and fires two shots.

Both managed to rush into their homes for cover before the gunshots were fired.

Footage taken from last Wednesday shows a group of masked thugs smashing up the outside of a terraced house in Bordesley Green, Birmingham 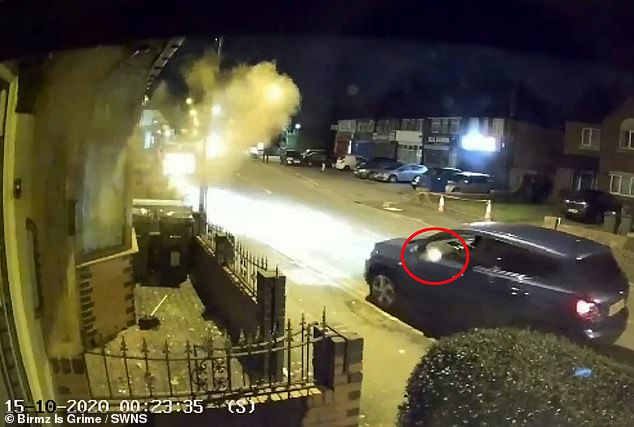 Two other men had to flee inside around an hour later, after a different car pulled up and fired two shots at the property

West Midlands Police said another property less than a mile away was also blasted within 30 minutes of the attack.

Detectives believe both incidents may be linked and have launched a public appeal for information to help identify the suspects. Nobody was hurt in either shooting.

Video of the first shooting was shared anonymously on social media yesterday and has gone viral with more than 135,000 views.

Chilling footage captured by a neighbour’s security camera shows a car pulling up outside the house at around 11.25pm, as three hooded figures wielding bats emerge from the vehicle. 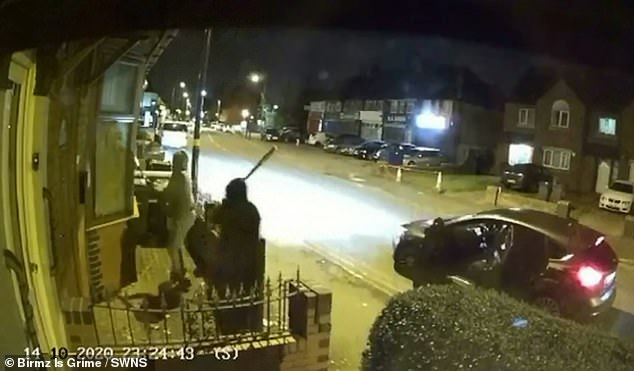 Police are connecting the attack on the house with a drive-by shooting there an hour later, along with a second shooting at a property less than a mile a way 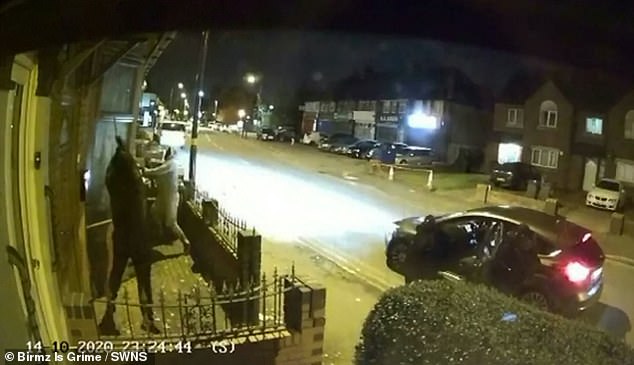 Within 20 seconds, the car pulls up, three men leave the vehicle launch their attack, before returning to the vehicle and speeding off 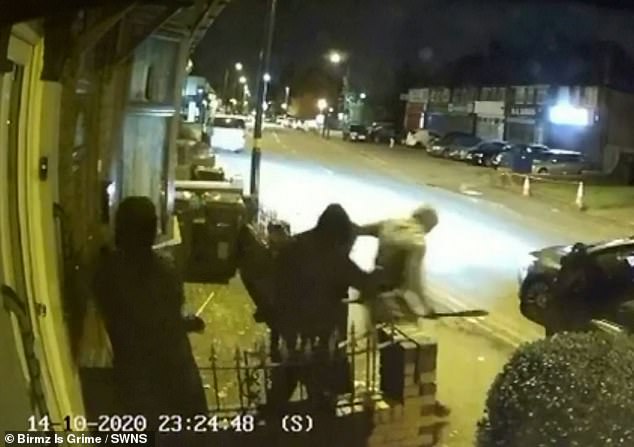 After launching the attack, three hooded thugs scramble back into a car to flee the terraced street

They run towards the property and smash all the downstairs windows before hurrying back to the car and fleeing the scene seconds later.

A second clip filmed shortly after midnight shows a resident and his neighbour assessing the damage outside the house.

Suddenly, a car pulls up outside and both residents bolt inside their homes as they spot a gunman in the front passenger seat.

Two shots are then fired at the house – landing inches from where its occupant was standing just moments ago – as a cloud of dust rises out of the doorway. 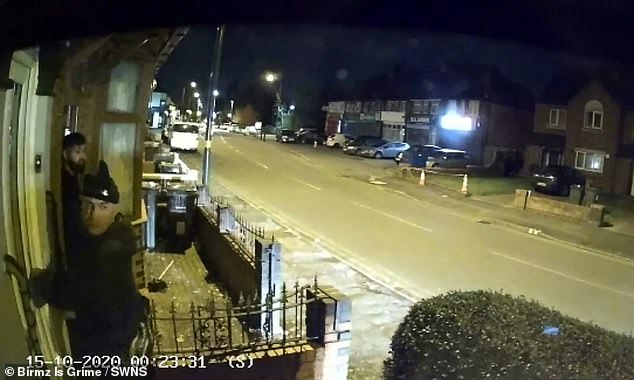 Around an hour after the initial attack, two neighbours talking on their doorsteps were forced to flee inside after a gunman pulled up in a different car 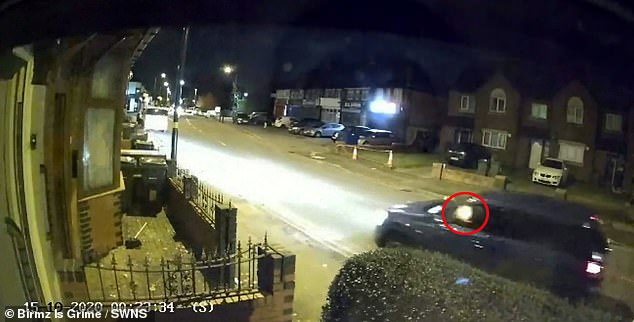 The shotgun’s blast was caught on camera, with both men managing to duck inside their homes for cover 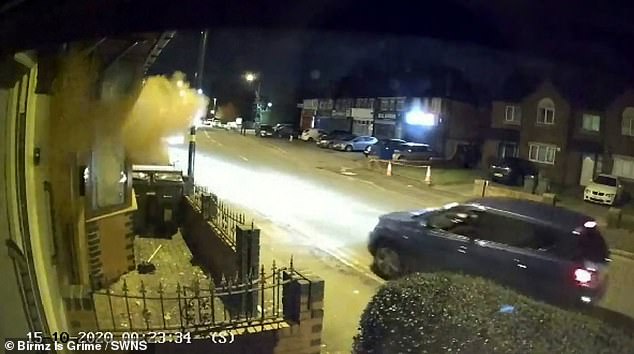 One neighbour, who did not wish to be named, said: ‘I live a bit further along the road so I didn’t see what happened but it’s getting worse around here.

‘Apparently some lads came and smashed up the front of the house to lure the bloke out so they could shoot him.

‘It’s very scary, people are driving around here with guns.’

A West Midlands Police spokesman said: ‘We are continuing to investigate after shots were fired at two properties in Bordesley Green overnight on Wednesday.

‘Properties in Yardley Green Road and Churchill Road were shot at within 30 minutes of each other. Thankfully no one was hurt, although damage was caused to both houses.

‘We believe that both addresses were targeted so there is no threat to the wider community, but we have stepped up our patrols in the area as a precaution.

‘Last night we checked vehicles in the area conducting several searches and this will continue to reassure residents that we will not tolerate violence on our streets.’ 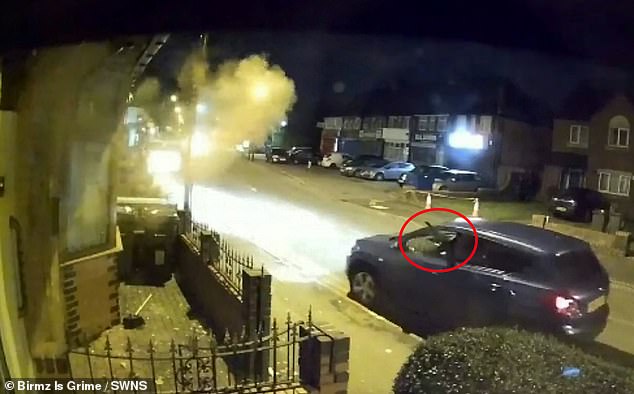 Two shotgun blasts were captured on CCTV, with the weapon seen hanging from the window of the car as it drove past 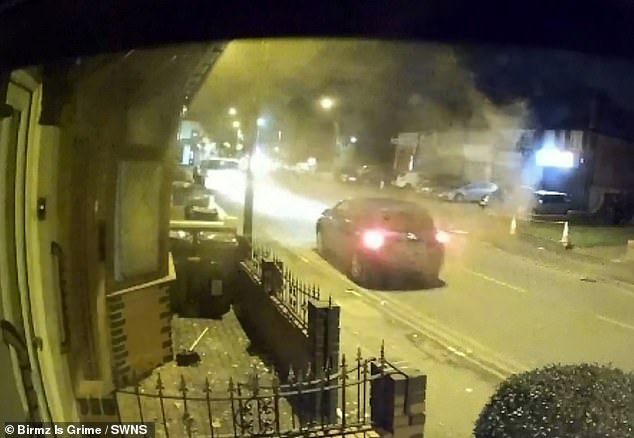 With smoke billowing from the front of the home, the car is seen pulling away. West Midlands Police are connecting the drive-by with another shooting which happened less than a mile away on the same night

Inspector Amir Abid, of Birmingham East Police, added: ‘We understand that these were alarming incidents which create fear among residents and I would urge anyone who has any information about who was responsible to contact us.

‘In the meantime, if anyone would like to speak to us about their concerns in Bordesley Green please get in touch with my team.’

The terrifying footage was obtained by website Birmz Is Grime and has been viewed thousands of times since being uploaded to social media.

Resident Tom Layton wrote: ‘Somebody got on the wrong side of some bad people. That is madness. What is happening in this city.’

Brian Collins added: ‘This is something from the ghettos of LA – not something I expect to see in my city. Frightening.’

Kal Edwards said: ‘That is one lucky escape. He steps inside literally a second before those gunshots ring out.’

Anyone with information is urged to contact the force on 101 quoting crime reference number 20BE/250724V/20.