Four gunmen are shot dead as they attack Pakistan Stock Exchange, with traders hiding inside their offices as weapons are fired inside the building

Four gunmen have been shot dead after attacking the Pakistan Stock Exchange in Karachi, in which five civilians were also killed.

The attackers arrived in a car before using grenades and rifles to attack the building, leaving another five people wounded.

Traders scrambled for cover in their offices and were evacuated out a back entrance as heavily armed police swooped in and a firefight broke out.

All gunmen were shot dead, the Karachi Inspector General told Geo TV, and police are now inside the building conducting a search.

Officers said the attackers were wearing off-duty police uniforms, were armed with sophisticated weapons, and carrying a bag likely filled with explosives.

Inside the stock exchange, broker Yaqub Memon says he and others are huddled inside their offices.

Heavily armed special forces have surrounded the building located in the heart of the city’s financial district, where the Pakistan State Bank is located as well as the headquarters of several national and international financial institutions.

Local television stations are showing police in full body armor surrounding the building but still staying outside the high walled compound of the stock exchange. 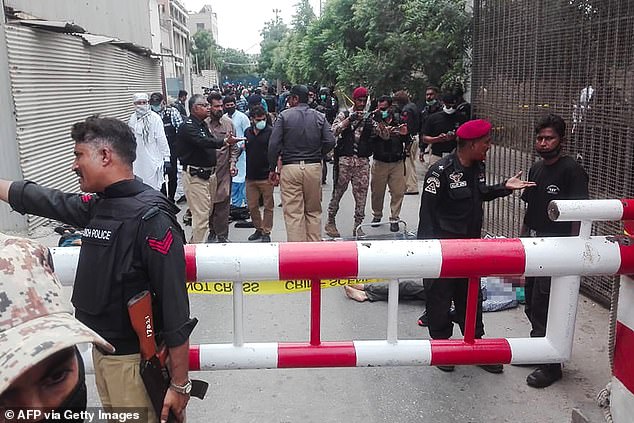 The gunmen drove up to the building in a car before jumping out and launching their attack, which left panicked traders scrambling for cover in their offices