By Henry Martin For Mailonline and Reuters

Gunmen on motorcycles killed six French tourists and their Nigerien guide and driver in a wildlife park today, a senior official and a security source said.

The group was attacked in a giraffe reserve in Niger’s Kouré area, the governor of Tillaberi region, Tidjani Ibrahim Katiella, said.

‘They were intercepted and killed,’ he added, confirming that six French people and two Nigeriens died. A Niger security source said the Nigeriens were a guide and a driver.

French President Emmanuel Macron’s office confirmed that French nationals had been killed in Niger. It said Macron spoke on the phone with Niger’s President Mahamadou Issoufou, but provided no further details.

There was no immediate comment from the government in Niger.

Pictured: The car where six French tourists, their local guide and the driver were killed by an unidentified gunmen riding motorcycles on August 9, 2020 in an area of southwestern Niger 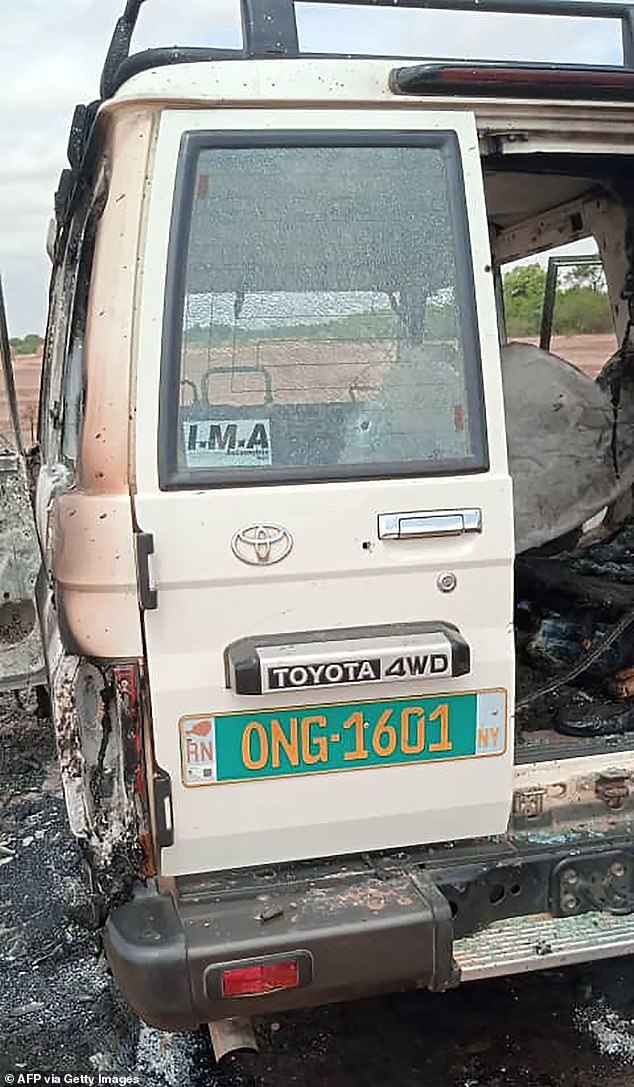 The group was attacked in a giraffe reserve in the West African country’s Kouré area, the governor of Tillaberi region, Tidjani Ibrahim Katiella, said

The French government warns people against travelling to large parts of Niger where militant groups including Boko Haram and an affiliate of Islamic State operate.

The Koure Giraffe Reserve, around 40 miles southeast of the capital Niamey, is a popular attraction in Niger, a huge country that borders seven states in an unstable region including Libya, Mali, Chad, Algeria and Nigeria.

Militants linked to Islamic State killed four U.S. soldiers in an ambush in Niger in October 2017, an attack that increased scrutiny of U.S. counter-terrorism operations there.

France, a former colonial power in the region, also launched a coalition of West African and European allies in June to fight Islamist militants in the Sahel region that includes Niger.

It has deployed thousands of troops in the arid region south of the Sahara desert since 2013. But militant violence has been on the rise.