Gunmen killed six people including a priest outside a Catholic church in Burkina Faso on Sunday, a local official said, the second attack on Christians in two weeks in a nation increasingly overrun by jihadists.

Congregants were leaving church around 9 a.m. (0900 GMT) when about twenty men encircled them and shot six dead, Boucary Zongo, mayor of the northern town of Dablo where the attack took place, and a witness, told Reuters.

The attackers then burned the church, looted a pharmacy and some others stores, and left in vehicles, they said.

Burkina Faso historically known for its religious tolerance has been beset by a rise in attacks in 2018 as the attack comes as jihadist groups seek to destabilise Burkina and the wider Sahel region.

A map showing where the two attacks took place. The first attack on April 28 took place in Silgadji Burkina Faso with the attackers reportedly fled north to Mali after opening fire at a church on Sunday. The second took place in Dablo town on Sunday

Groups with links to Islamic State and al Qaeda, based in neighbouring Mali, are violently attempting to extend their influence over the porous borers of the Sahel, the arid scrubland south of the Sahara.

The government declared a state of emergency in several northern provinces bordering Mali in December because of deadly Islamist attacks.

But violence has only worsened since. Two French soldiers were killed in an operation to rescue four people taken hostage in Burkina last week, France said.

Roughly 55% to 60% of Burkina Faso’s population is Muslim, with up to a quarter Christian. The two groups generally live in peace and frequently intermarry. 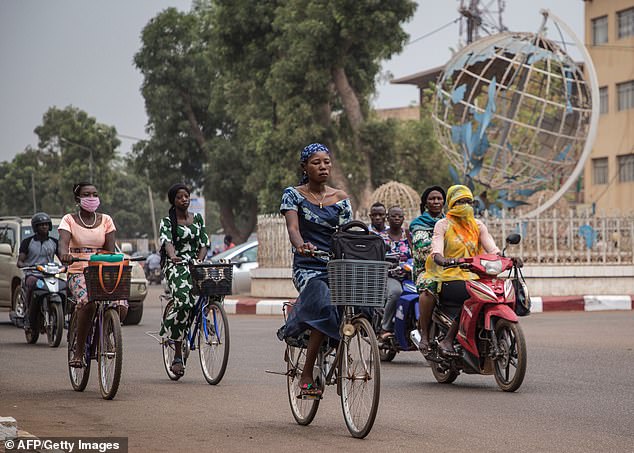 People ride bicycles and motorbikes around the United Nations roundabout in Ouagadougou, Burkina Faso, which has experienced a series of attacks (file photo)

Then in late April unidentified gunmen killed a pastor and five congregants at a Protestant church, also in the north, suggesting the violence was taking a religious turn.

Gunmen on motorbikes entered the church in the town of Silgadji near Djibo, the capital of Soum province, and opened fire near the end of a Sunday service.

Following the first church attack on the region a security source told AFP: ‘Unidentified armed individuals have attacked the Protestant church in Silgadji killing four members of the congregation and the pastor. At least two other people are missing.’

Burkina Faso has seen a surge in killings blamed on jihadists.

The attacks started in the north of the country before targeting the capital Ouagadougou and other regions, notably the east of the country.

Former colonial ruler France has deployed some 4,500 troops in Mali, Burkina Faso, Niger and Chad in a mission codenamed Barkhane to help local forces try to flush out jihadist groups.

In February, a Spanish priest, Father Cesar Fernandez, was killed in a raid attributed to jihadists in Nohao in the centre of the country. 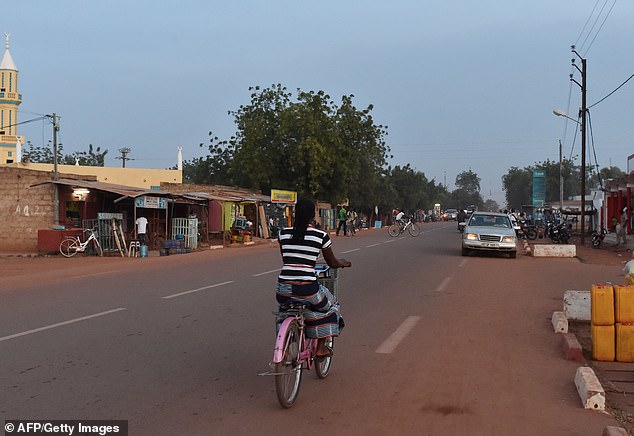 Five people including a priest were killed in an attack on a church Burkina Faso, which has seen a surge in killings blamed on jihadists (file photo, a woman cycles in Ouahigouya)

Violent organisations include the Ansarul Islam group, the Group to Support Islam and Muslims (GSIM) and Islamic State in the Greater Sahara.

Burkina Faso is part of the vast Sahel region, which has turned into a hotbed of violent extremism and lawlessness since chaos engulfed Libya in 2011.

Despite international efforts to create a transnational anti-jihadist military operation, named the G5 Sahel force, the situation is getting worse.

A report submitted to the UN Security Council last year warned that security had ‘deteriorated rapidly over the last six months’ in the area between Burkina Faso, Mali and Niger, with attacks spreading to eastern Burkina Faso.

According to an official report in September, 229 people had been killed in Islamist attacks in Burkina Faso since 2015, and the number has increased since then.

The growing boldness of jihadist fighters in the former French colony reflects the government’s apparent inability to protect its citizens.