Guns in Chicago are just ‘2.5 handshakes’ away, shocking study finds

Gun violence has long been a problem in Chicago, but a new study has found that offenders are closer to firearms than previously thought.

A Northwestern University study recreated a network of approximately 188,000 arrestees by grouping individuals who had been arrested together.

They found on average, any person in the network was 2.5 ‘handshakes’ away from a gun in the city of Chicago.

It is one of the first studies to try to map a gun market using network science, and the researchers used the novel scientific approach to understand how close offenders are to guns.

A Northwestern University study recreated a network of approximately 188,000 offenders. They found on average, any person in the network was 2.5 ‘handshakes’ away from a gun in the city of Chicago. Pictured: A customer shops for a pistol in Tinley Park, Illinois

‘Literally, we wanted to know how many ‘handshakes’ away possible users of illegal firearms are to a gun,’ said Andrew V. Papachristos, senior author of the study and a professor of sociology at Northwestern University.

Chicago has some of the nation’s strictest gun laws, but the city still recovers more firearms each year than any other place in the nation.

However, the 60 percent of firearms used in violent crimes in Illinois come from out-of-state, mostly from Indiana, which has far more lenient gun laws.

‘While Chicago and Illinois have strict gun laws, the proximity to cash and carry’ states like Indiana make the borders of these markets a bit more porous than an analysis focusing on a single city might lead one to believe,’ Papachristos said.

‘We need to understand how markets, even illegal ones, are shaped by policies and, in turn, what sorts of policies might be used to change the flow of guns in a network.’

WHAT ARE CHICAGO GUN VIOLENCE STATISTICS?

The city saw nearly a 16 percent decrease in homicides in 2017 from 2016, which was the deadliest year in Chicago in 20 years.

The murders were still above most annual totals in Chicago for the past 10 years. The number of yearly homicides in Chicago had hovered between 400 and just about 500 between 2007 and 2015.

The networked approach in the study suggests that one could map the risk of exposure to guns in a network and potentially use that as strategic points of intervention.

‘It could provide a roadmap for understanding how illegal guns ‘move’ through a network,’ he said.

‘In the context of Chicago’s illegal gun markets, this means that guns are in relatively close — but not necessarily immediate — access to individuals in the network,’ said Papachristos, also a fellow at the University’s Institute for Policy Research. ‘ 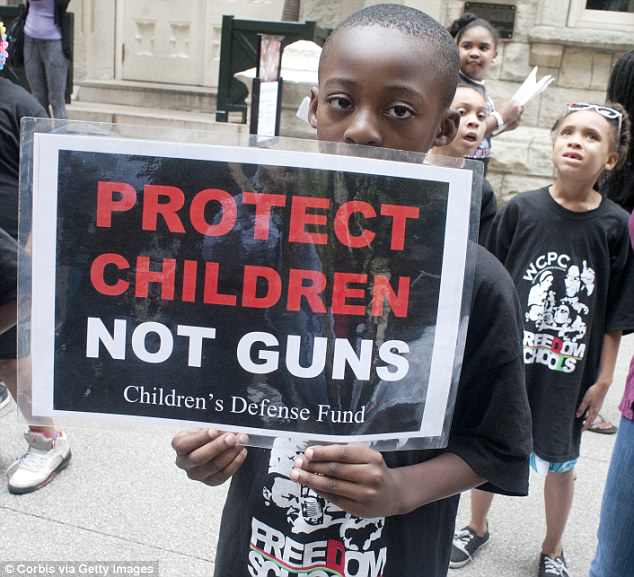 Chicago Police report in 2015, over 2,900 people were shot and 470 people were murdered. In 2016, there were 762 homicides, 3,550 shooting incidents, 4,349 shooting victims. Pictured: A march in the streets of Chicago by children protesting against gun violence

A distance of 2 equates with an “associates’ associate” – the equivalent of asking someone for a gun and that person replying, “I know someone who can get you a gun.”‘

It reduces the distance to the closest firearm by about 27 percent.

‘People are pretty darn close to guns, but it’s not quite as easy as driving through McDonald’s,’ Papachristos said.  ‘But gangs play a key role in facilitating access to guns.’

HOW COMMON ARE GUNS IN AMERICA?

A study led by researchers at the University of Washington School of Public Health analyzed data from a 2015 nationally representative survey that assessed handgun-carrying behavior of 1,444 gun owners.