Guy Ritchie paid tribute to his late father and grandfather on Remembrance Day in a moving post shared with his Instagram followers.

The director was moved to reference his family members, both former soldiers who fought with the Seaforth Highlanders, as Great Britain honoured those who lost their lives during the First and Second World Wars.

The day was particularly poignant for Ritchie, 52, whose father Captain John Vivian Ritchie passed away over the weekend, aged 92, 60-years after his grandfather was killed while fighting the German army in France.

Never forgotten: Guy Ritchie paid tribute to his late father and grandfather on Remembrance Day in a moving post shared with his Instagram followers

Captioning images of the pair, he wrote: ‘Remembering two old soldiers today — Seaforth Highlanders both — my grandad, Major Stewart Ritchie, who was killed in action in France on the 12th June 1940 and my dad, Captain John Ritchie, who passed away last weekend, aged 92.’

In one image a notably younger Guy is pictured cradling son David Banda – the child he adopted from a Malawian orphanage with ex-wife Madonna in 2005 – as an infant while sitting alongside his father.

Separate black and white images capture his grandfather in uniform while serving as an active soldier in the Highlanders. 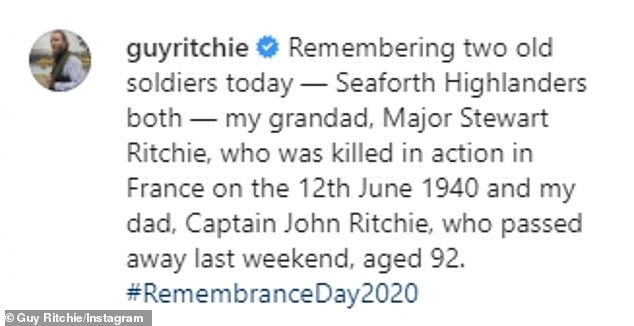 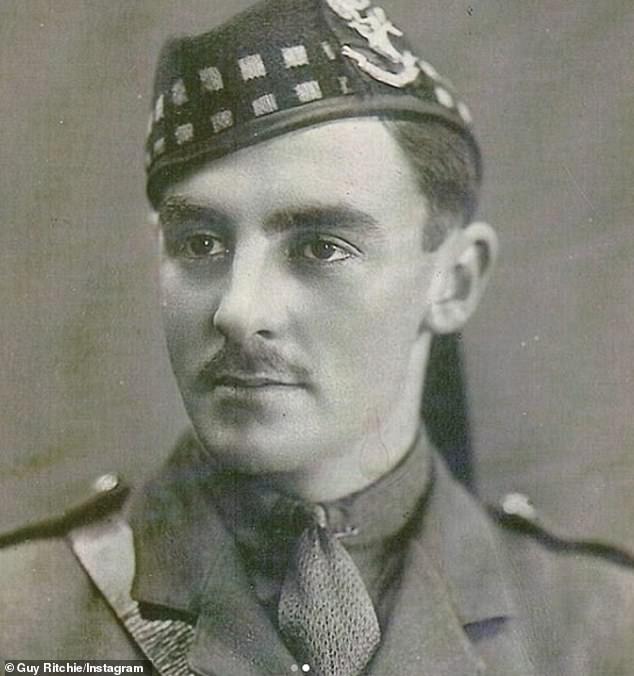 Going to war: Another image shared by the director captured his grandfather Major Stewart Ritchie in uniform while serving as an active soldier in the Highlanders.

Guy and actor friend Hugh Grant had previously re-created a photo showing the pair’s fathers posing together while stationed in the same military regiment 66 years ago.

The two men, Captain John Ritchie and Captain James Grant, were stationed in Singapore with the Highlanders at the time.

Amazingly, the grandfather of production assistant Rory Gibb on the pair’s recent film The Gentlemen was also in the decades-old snap, prompting them to arrange a loving tribute. 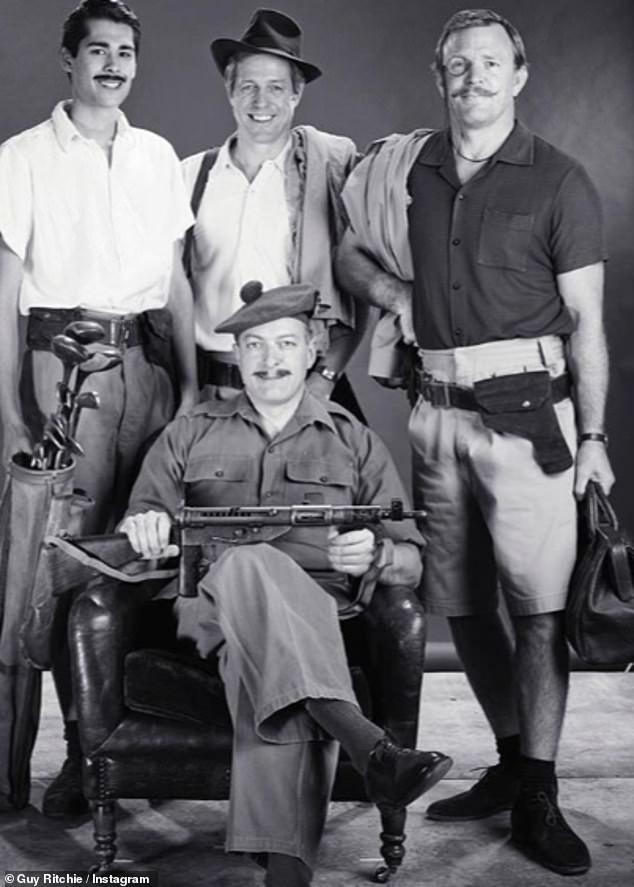 Previously:  Guy and actor friend Hugh Grant had previously re-created a photo showing the pair’s fathers posing together while stationed in the same military regiment 66 years ago 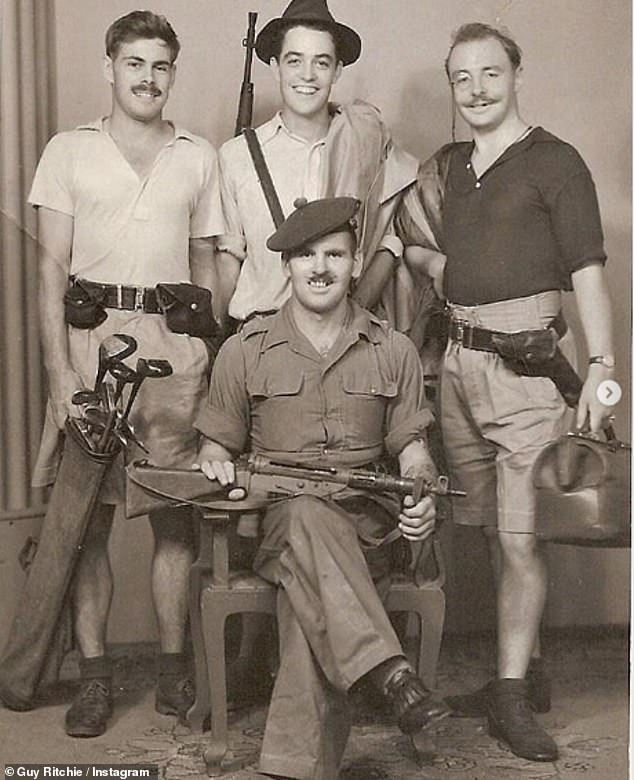 Amazing: The two men, Captain John Ritchie (right) and Captain James Grant (centre), were stationed in Singapore as part of the Seaforth Highlanders

Sharing the image with Instagram followers on Remembrance Day in 2019, he wrote: ‘This first picture was taken 65 years ago in Singapore where my dad — Captain John Ritchie — and Hugh Grant’s dad —Captain James Grant — were stationed in the same regiment, the Seaforth Highlanders.

‘The second picture — taken on a film set in London 65 years later, has one grandson and two sons recreating that original image.

‘We’d discovered by co-incidence that Rory Gibb, our Production Assistant on the film‘s grandad was in that same original picture. You can see the resemblance. 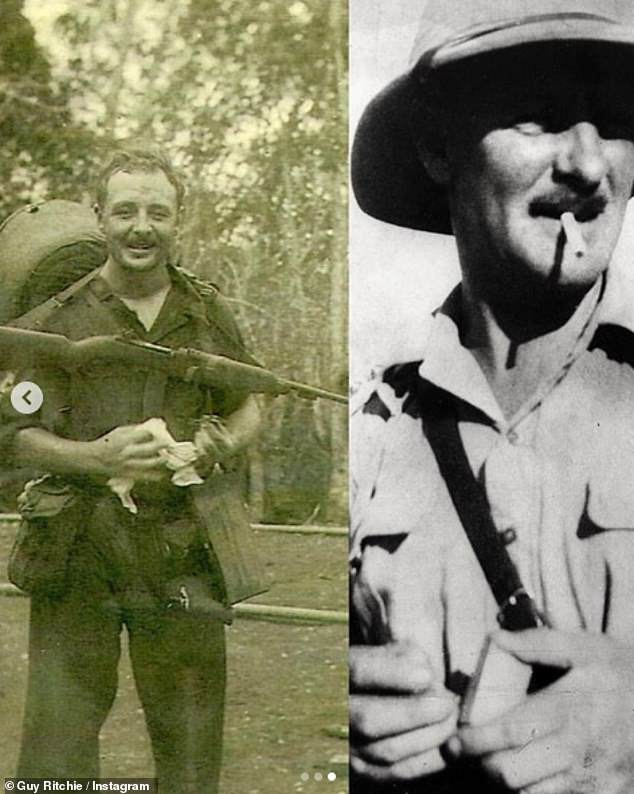 Incredible: Guy’s grandfather Major Stewart Ritchie was killed in France in 1940 during the Second World War

‘The third image is of my dad and grandad. My granddad, Major Stewart Ritchie, died in 1940 in France in WW2.’

He added: ‘Spare a thought today for the men and women in uniform who have fallen in defence and service of others. #RemembranceDay #RemembranceSunday.’

The Seaforth Highlanders was a historic line infantry regiment of the British Army, mainly associated with large areas of the northern Highlands of Scotland.

The regiment existed from 1881 to 1961, and saw service in World War I and World War II, along with many numerous smaller conflicts.