‘Dirty as they come’: GWS Giants enforcer is slammed as he appears to eye gouge an opponent during the AFL Grand Final

Greater Western Sydney Giant’s enforcer Toby Greene is slammed by fans as he appears to eye gouge a Richmond player in the opening quarter of the AFL grand final.

In footage of the incident, Greene can be seen holding Tigers player Liam Baker on the ground with one arm while grabbing at his face with his other hand.

‘Dirty as they come. No surprises,’ one fan wrote online.

‘Nothing here!’ argued another fan.

‘Thug. Hope he gets a couple of weeks for it,’ added a third.

The AFL grand final between the Richmond Tigers and GWS Giants kicked off at 2.30pm on Saturday in front of a sell-out crowd at the Melbourne Cricket Ground.

Greene appears to have not leant his lesson after being put on the sidelines for a week by the tribunal after the Giant’s semi-final win against the Brisbane Lions.

The tribunal ruled Green had made unreasonable contact with the eye region of Lions midfielder Lachie Neale. 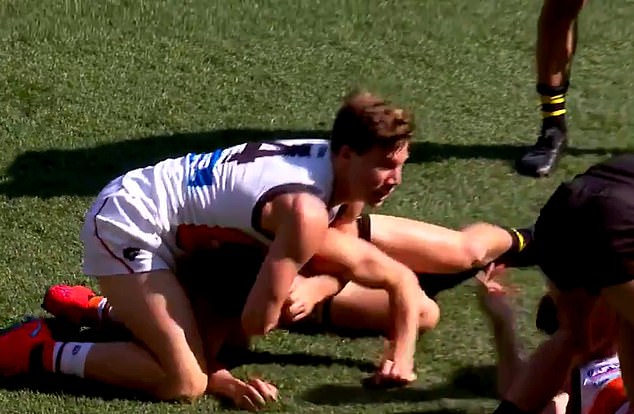