Gwyneth Paltrow’s wellness website Goop has been accusing of making ‘deceptive’ and ‘unsubstantiated’ claims about the health benefits of various products in order to promote them to readers.

Truth In Advertising (TINA), a nonprofit based in Madison, Connecticut, filed a complaint with California’s health regulators on Tuesday, while calling for the site to be officially investigated.

The organization says its review of the website has rendered more than 50 instances of Goop claiming to ‘treat, cure, prevent, alleviate the symptoms’ of several conditions—something it says Goop is in no position to do.

J’accuse: A consumer watchdog has filed a complaint against Gwyneth Paltrow’s wellness venture Goop, accusing it of marketing its products thanks to ‘deceptive’ claims

Among the medical conditions flagged up by TINA are hormonal imbalance, infertility, thyroid dysfunction and uterine prolapse.

The nonprofit bashed Goop’s marketing methods in a blog post that accompanied its complaint, listing a range of products it says are linked to unsubstantiated claims.

‘These include crystal harmonics for infertility, rose flower essence tincture for depression, black rose bar for psoriasis, wearable stickers for anxiety, and vitamin D3 for cancer,’ the post reads.

‘The problem is that the company does not possess the competent and reliable scientific evidence required by law to make such claims.’

In addition, TINA accused Goop of claiming to treat certain conditions that it says are not ‘medically recognized’, such as adrenal fatigue, which encompasses a variety of symptoms such as body aches, weight loss and fatigue but isn’t recognized as a medical diagnosis.

Specifically, TINA flagged up Goop’s Why Am I So Effing Tired? supplements package, which is advertised on the website as a possible way to relieve the condition. 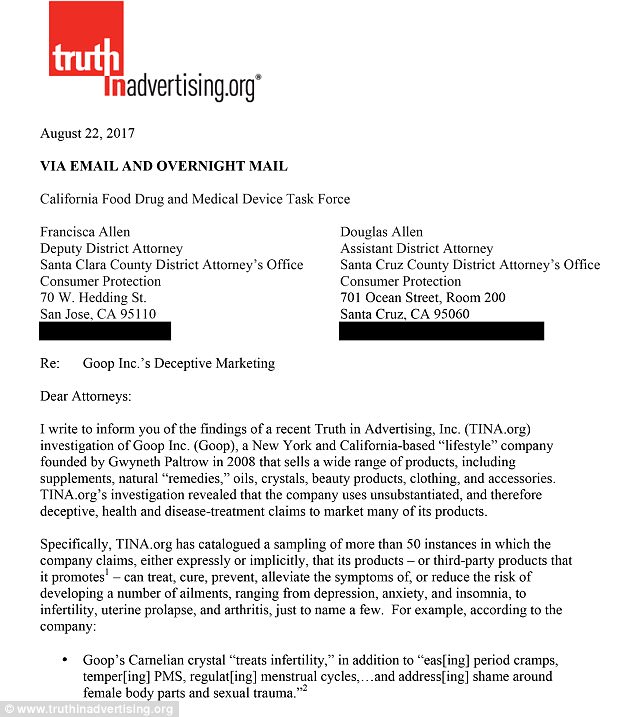 Paperwork: Truth In Advertising (TINA), a nonprofit based in Madison, Connecticut, filed a complaint with California’s health regulators on Tuesday 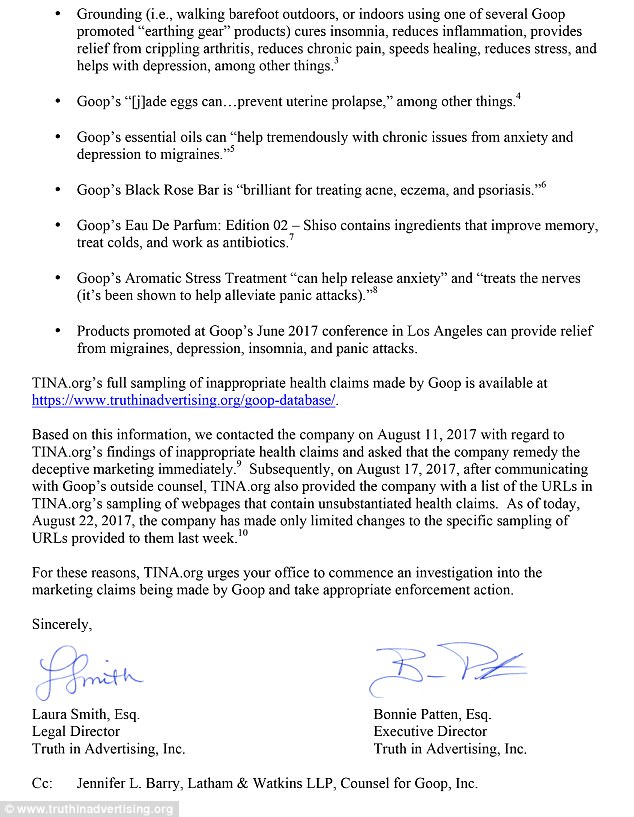 Review: The organization says its review of the website has rendered more than 50 instances of Goop claiming to ‘treat, cure, prevent, alleviate the symptoms’ of several conditions

TINA said it previously wrote Goop a letter asking it to get rid of its ‘deceptive marketing’ immediately.

But several days later, the company had only made ‘limited changes’ to the sections of the website flagged up by TINA, according to the nonprofit.

It is now urging authorities to start an investigation into Goop’s marketing claims and take appropriate action.

‘Goop is dedicated to introducing unique products and offerings and encouraging constructive conversation surrounding new ideas. We are receptive to feedback and consistently seek to improve the quality of the products and information referenced on our site,’ a spokesperson for Goop told DailyMail.com in a statement.

‘We responded promptly and in good faith to the initial outreach from representatives of TINA and hoped to engage with them to address their concerns. Unfortunately, they provided limited information and made threats under arbitrary deadlines which were not reasonable under the circumstances.

‘Nevertheless, while we believe that TINA’s description of our interactions is misleading and their claims unsubstantiated and unfounded, we will continue to evaluate our products and our content and make those improvements that we believe are reasonable and necessary in the interests of our community of users.’ 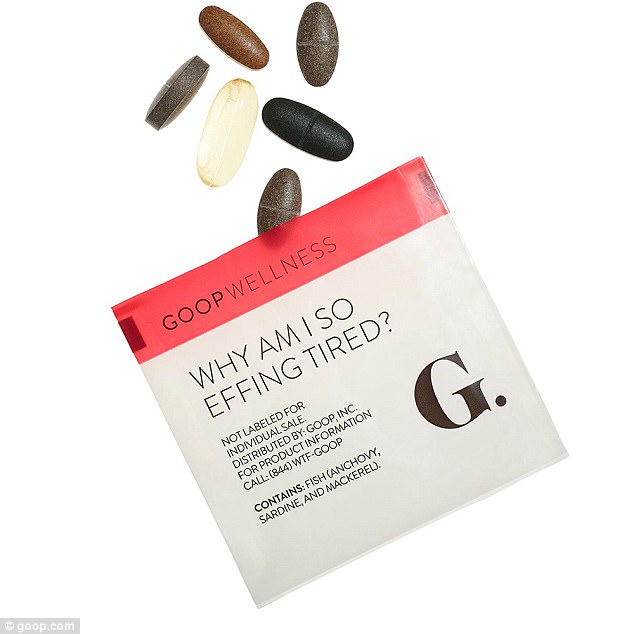 Bashed: Among other products, TINA flagged up Goop’s Why Am I So Effing Tired? supplements package, which is advertised on the website as a way to relieve adrenal fatigue

This is not the first time Goop, which started out as a weekly newsletter, has come under fire for its health claims.

In January this year, Goop published an interview with a doctor who recommended people insert jade eggs in their vaginas for better sex. The link came with an advertisement of Goop’s own rose quartz and jade eggs, for sale at $55 and $66 respectively.

Dr. Jen Gunter, an OB/GYN based in San Francisco, blasted the practice as dangerous, writing in a blog post: ‘I would like to point out that jade is porous which could allow bacteria to get inside and so the egg could act like a fomite.

‘This is not good, in case you were wondering. It could be a risk factor for bacterial vaginosis or even the potentially deadly toxic shock syndrome.’

In June, Goop got under fire for promoting stickers it said where made out of the same carbon material as the lining of NASA space suit, meant to help balance energy levels.

But NASA promptly disavowed the claims and said it does not, in fact, use carbon for the lining of its space suits.

A former NASA chief scientist in turn told Gizmodo about Goop’s claims: ‘Wow. What a load of B.S. this is.’