A staggering variety of so-called feminine hygiene products seek to help with ‘vaginal odour’ and discharge and ‘keep you fresh’.

But these products actively promote the view that women’s vaginas should be discharge-free, says an Australian gynaecologist.

Dr Deborah Bateson, from the University of Sydney’s obstetrics, gynaecology and neonatology department, made the claim in a piece for The Conversation.

She revealed that many women now believe their vagina should exude the whiff of rose petals or vanilla pods.

What is vaginal discharge and why is it important?

The vagina is self-cleaning, and vaginal discharge plays an important role in keeping the vagina healthy.

From puberty, when oestrogen kicks in, the vagina becomes colonised with healthy bacteria from the Lactobacillus group which produce lactic acid.

This finely balanced vaginal ecosystem is referred to as the vaginal microbiome and the resulting acidity of the vagina provides protection against sexually transmissible infections.

Healthy vaginal discharge is made up of fluid from the vaginal walls, mucus from the cervix as well as the lactobacilli.

Because the vaginal environment is hormonally influenced, variation in the amount of discharge throughout the month is to be expected and completely normal.

STOP COMPLAINING ABOUT THE SMELL!

Dr Jen Gunter, a prominent critic of Gwyneth Paltrow’s controversial Goop website, hit out at men who complain about the natural smell of their partner’s genitals in October.

The Canadian gynecologist described it as a ‘form of abuse’ writing in her blog newsletter.

She revealed she once dumped a boyfriend for complaining about the smell of her genitals.

Dr Gunter urged women not to feel ashamed and feel they have to resort to buying harmful products that create artificial odours.

She said they upset the vagina’s natural pH balance and leave you at a greater risk of infections like gonorrhoea and even HIV.

As well as providing a protective environment, vaginal discharge provides natural lubrication with between one and 4mls of fluid produced every 24 hours.

Healthy vaginal discharge has a characteristic smell – and in some women this can become stronger because of the large number of sweat glands in the hair-bearing pubic area.

So while washing inside the vagina is not recommended, it’s important to keep the outer skin clean.

Disruption of the healthy vaginal environment

Anything put in the vagina can potentially disrupt the vaginal environment and its balanced vaginal flora, including tampons, penises, condoms, semen, fingers and hygienic sex toys.

Disruption in these cases is almost always temporary and the vagina quickly restores itself.

But this may not be so in the case of vaginal cleansing products, or repeated douching.

Homemade douches usually contain water and vinegar and commercial products contain antiseptics and fragrances that can reduce the lactobacilli and reduce the protective effect of the discharge. 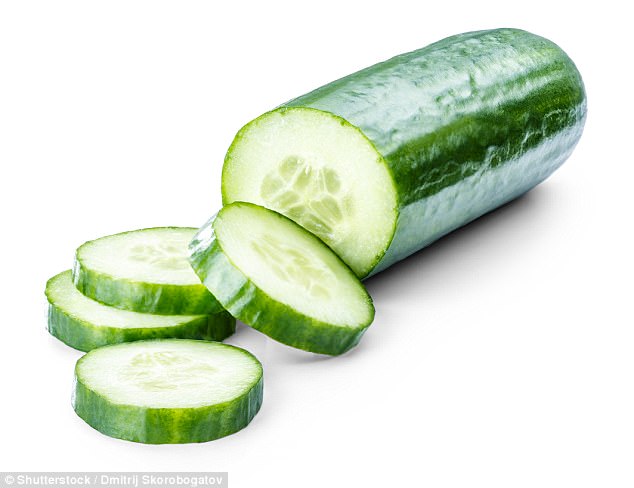 From deodorants to cucumber cleanses and scented ‘panty liners’, many ideas have been touted as potential ways of cleaning the vagina in recent months

So what about the latest ‘v-treatment’, vaginal steaming? To quote a version promoted on Gwyneth Paltrow’s site GOOP.

‘You sit on what is essentially a mini-throne, and a combination of infrared and mugwort steam cleanses your uterus. It is an energetic release — not just a steam douche — that balances female hormone levels.’

Apart from the risk of burning and scalding, there are many other reasons not to v-steam.

Not only will steam have a drying effect on the vagina, it’s likely to disrupt the vaginal microbiome and reduce the body’s natural barrier against infections.

While no steam may actually reach the uterus, blowing hot herbal fumes into this important organ has no benefits and could in fact do harm.

There would certainly be no effect of this pseudo-scientific treatment on female hormone levels.

REVEALED: WHEN YOU SHOULD SEEK MEDICAL ADVICE

While vaginal discharge is certainly normal, if you experience a significant change in the volume, colour or odour of discharge, you should seek medical advice.

A change in vaginal discharge can be a sign of infection, although the most bacterial STIs, including chlamydia and gonorrhoea, usually do not cause any change in discharge.

More common causes are vaginal thrush or bacterial vaginosis which occur when the vaginal flora becomes over-colonised with either yeast or other vaginal bacteria.

Bacterial vaginosis is a condition in which the vagina is unable to return to its normal state and becomes more alkaline.

The alkalinity of menstrual blood can be associated with bacterial vaginosis.

The lactobacilli are reduced and replaced with other vaginal bacteria which can be associated with an increased greenish-greyish discharge and an unpleasant odour.

Although the condition is not thought to be harmful, for women living with bacterial vaginosis, having a persistent and malodorous discharge can be debilitating and they should see their doctor to discuss how to manage the condition.

As doctors working in sexual health we are keen to help women work out what is normal and what is not.

It’s crucial to reject practices that masquerade as clinical treatments but have no base in evidence.

Vaginal discharge is healthy and plays an important role in the defence against infection. Trying to eliminate it makes no sense and is in fact harmful.