A hair removal expert has revealed the common mistakes people make when getting rid of body hair – including the disgusting reason why you should avoid shaving.

Speaking exclusively to FEMAL, she added that waxing and hair removal creams can leave the skin red – and that Intense Pulsed Light (IPL) treatments are the best way to get rid of hair.

‘By shaving you are effectively “mowing” your hair and slicing it to the skin level which means within 24 hours most of us will feel its regrowth as stubble,’ she explained.

‘The hair also grows back thicker and more robust which means those of us with thick, dark body hair, it will be extra visible.

‘This quick fix is also not great for those with sensitive or compromised skins as razors carry more bacteria than any personal tool.

‘You are, in effect, spreading dead, putrefied skin over your most intimate areas and if you have a cut or cut yourself shaving, this can cause inflammation and skin infections too.

‘A little test for you. If you take the back of your razor off and look behind the blade, you will see the build-up of the dead skin. It is this you are smearing all over your body every morning’.

However, Trish explained that shaving is the most common method of hair removal as it’s ‘super quick’ and ‘easy to become part of your routine’.

But Trish argues it’s the ‘most high maintenance method of body hair removal’ as depending on the season or the growth rate of your hair, it can be almost daily. 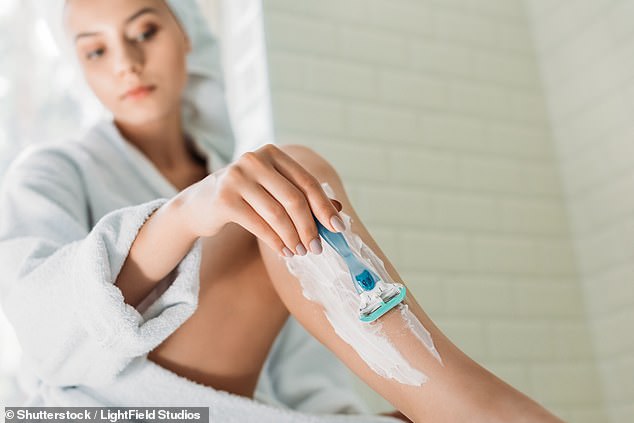 ‘Most of us hate the feeling of stubble and even those who wax religiously also tend to break out the razor if they are wearing something skin bearing’.

‘This will help to lubricate the blade and the skin and minimalise and shaving rashes.

‘If you do find yourself with a nick or cut, blot off the blood with a clean dry tissue and let the area air to give it time to clot a little and stem the bleeding.

‘Try not to get it wet or swim in the pool or sea for at least 24 hours and shower with a non-scented and natural wash.’

What is an IPL device?

An IPL device uses Intense Pulsed Light to stop hair growth in its tracks and can be used once a week for full body hair removal to target areas including the legs, body and face.

They’re most effective on light to medium skin tones, with hair ranging from dark blonde to black.

She also warns to never share blades on holiday or with friends as infections can be transferred this way such as yeast infections and cystitis.

The expert also warned that waxing shouldn’t be done at home as it can cause bruising and blood blisters.

‘Waxing can only be performed when the hair is long enough for it to get “caught” to be pulled from the root and this can mean spending up to a week with hairy legs.

‘Some people find waxing painful but the good news is that the hair becomes much finer and the root much smaller with every treatment so your awareness of regrowth is less.

‘With waxing, you won’t have that scratchy stubble that shaving gives either. Hair grows in different directions so it is always best to have a professional take care of it.

‘Mainly because they can get closer to the area to really make sure it is properly done and two because your at -home wax strips are not at a professional standard strength.

‘I regularly have clients come in with hair still on their legs but also slight bruising and blood blisters where the wax has caught the skin and not the hair properly. It really is quite a feat to do it properly yourself.

‘Any redness after waxing, if you do get some, will completely go over night.

‘But, try not to go out in the sun with freshly waxed legs and make sure you give them time to settle for at least 24 hours post your appointment.

Trish also warned against using hair removal creams as they melt the hair down to skin level, but don’t touch the root. 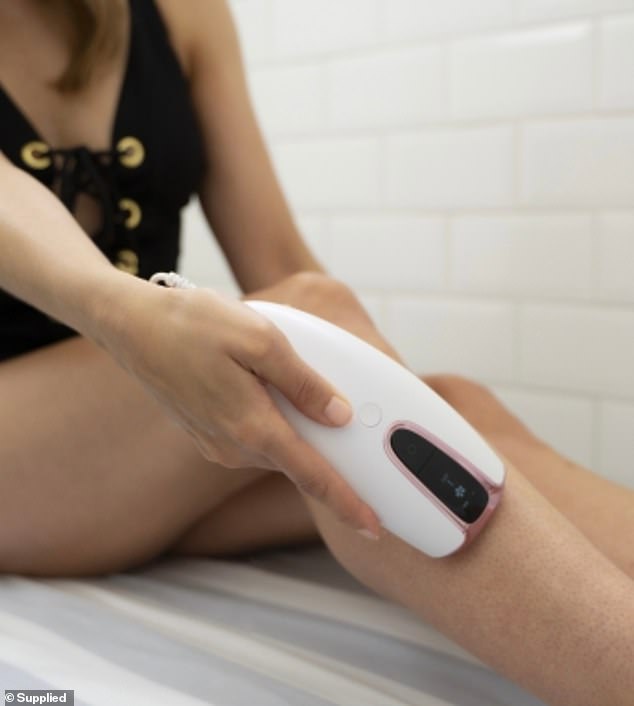 Unlike waxing, at-home IPL devices are ‘just as effective’ as going into the salon, according to Trish.

‘Some people react with hair removal creams or find them awkward and smelly. You also have to time them to perfection. Too little a time left and they won’t work and to long, they can cause burns or skin reactions.

‘Most are heavily chemical based so not great for your private parts.

‘As a toss-up between cream and a razor, shaving would be less time consuming and better for you.

Instead, Trish advocates for using an IPL to ‘zap your body hair away’.

‘Just a few weeks of zapping your body hair will permanently reduce the hair,’ she said.

‘It works by the laser light traveling down your hair to the root and effectively killing it.

‘It is the best and most effective way of reducing your hair and once you have spent time reducing it, the maintenance for all over, your legs, underarms and bikini line is just 15- 20 mins a month. Just enough time to watch your favourite soap.’

Unlike waxing, at-home IPL devices are ‘just as effective’ as going into the salon, according to Trish.

‘Although they are an initial investment, it is just a one-off fee, around a quarter of the price of a whole course at a salon, the price of five waxing sessions and the price of a year’s worth of razor blades.

‘This is because the laser needs the darker tone of hair to attach to.’

‘Using the IPL is pain free, it can be a little uncomfortable the first time you use it, almost like a little zap that shocks you with the light rather than feeling it.

‘But there are multiple settings so start off with the lower setting and then increase it as you become more accustomed to it.

‘This method means you can just get on with your day-to-day life without worrying about spider hairs or underarm mishaps and is also great for those who suffer with PCOS or skin issues such as eczema or psoriasis as you are not touching the actual skin as you would be waxing or shaving.

‘Though you should always perform a patch test first and if you have excessive skin issues, speak to your Doctor if you are unsure.’