The widow of assassinated Haitian president Jovenel Moise was seen wearing a sling at a tribute for her husband while violence has started ahead of his funeral.

Martine Moïse, 47, appeared in public with her three children on Wednesday for the first time since her surprise return to Haiti four days earlier.

The grieving widow attended ceremonies to commemorate her husband in the capital of Port-au-Prince.

Martine, who had been recuperating at a hospital in Miami after she was wounded in the July 7 attack at the couple’s private home, wore a black dress and black face mask and her right arm was in a black sling.

Jovenel Moise, 53, was assassinated by a hit squad made up mostly of Colombian mercenaries but many details surrounding the brazen attack have remained a mystery.

Martine’s appearance on Wednesday came as the Pentagon revealed that four Colombian military veterans who were involved in the assassination had trained at Fort Benning in Georgia.

Martine Moïse, 47, appeared in public with her three children for the first time since her surprise return to Haiti on Saturday 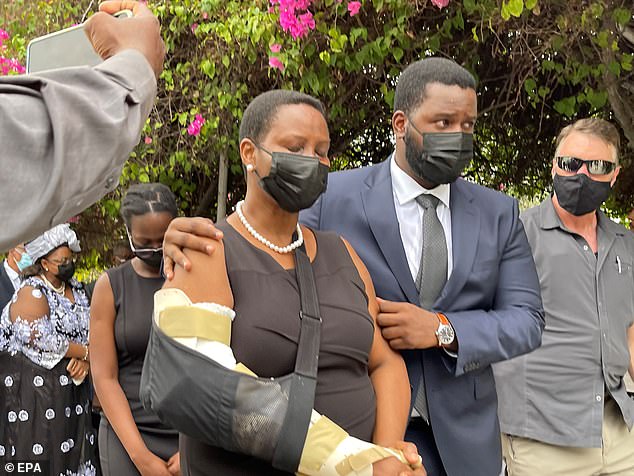 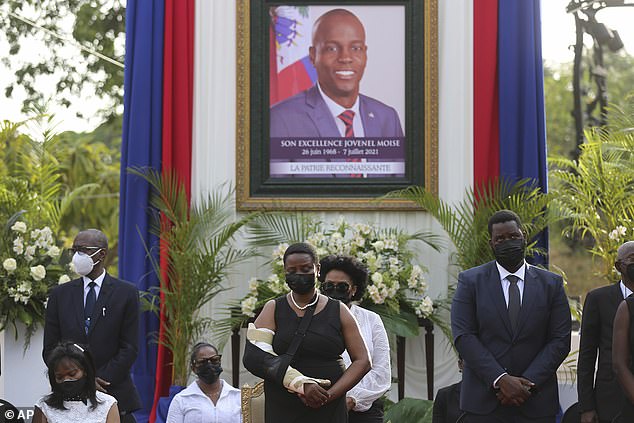 She attended ceremonies are being held to commemorate her husband Jovenel Moise, pictured in a photograph above her, in the capital of Port-au-Prince 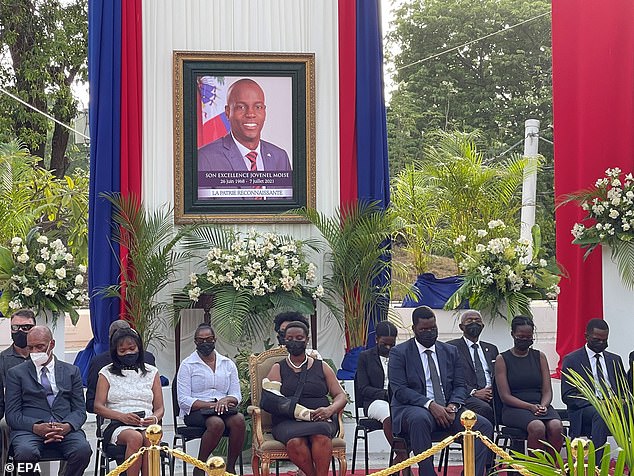 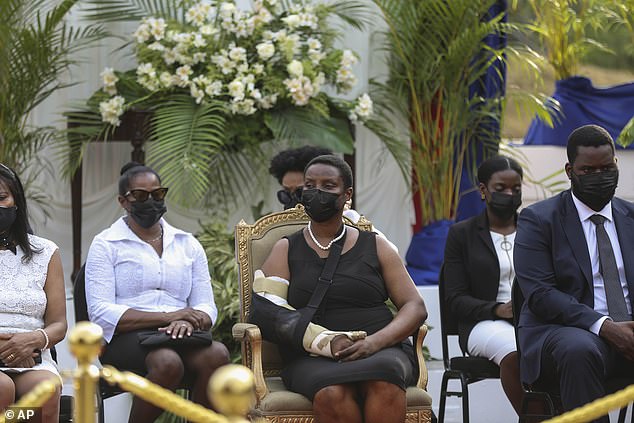 Jovenel Moise, 53, was assassinated by a hit squad made up mostly of Colombian mercenaries but many details surrounding the brazen attack have remained a mystery 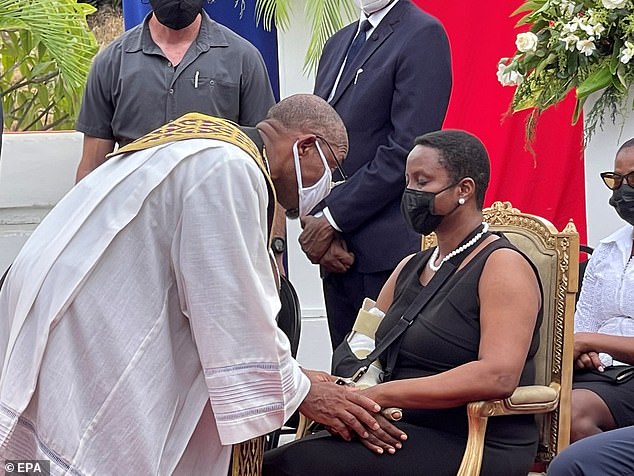 Martine was pictured attending a ceremony in the gardens of the National Pantheon, in Port-au-Prince 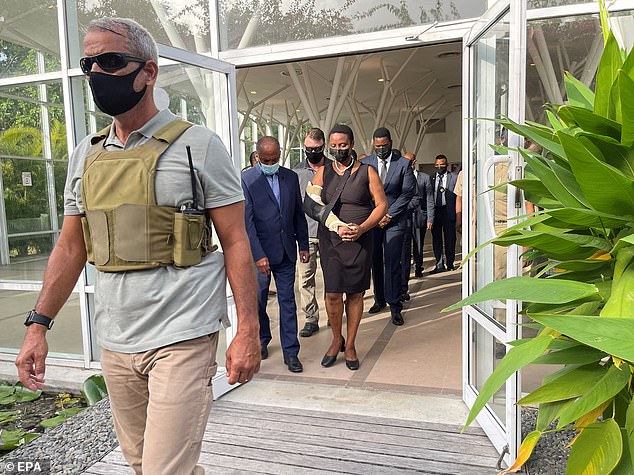 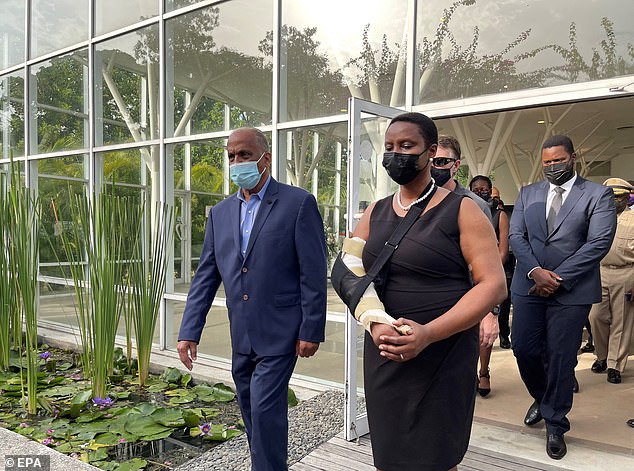 Attendees at the ceremony on Wednesday included former Haitian president Michel Martelly who preceded Jovenel in the he office, La Prensa Latina reported.

People wishing to pay tribute to Jovenel were seen lining up write in a book of condolences in the northern city of Cap-Haitien – close to where violence has started ahead of the president’s funeral.

‘The death of my excellency hurts me a lot. His name will remain in my heart for days because of his cruel death. It is we who have given him up,’ a woman named Lovelie Joseph told La Prensa Latina on Wednesday.

‘It hurts me. I deeply regret his departure. That is why I have come to say goodbye to my president.’

Jovenel’s wake is scheduled to take place on Thursday while his funeral will be held in Cap-Haitien on Friday. The mayor of Cap-Haitien has declared those days holidays and banned the sale of alcohol in bars, according to the outlet.

His family has reportedly said they will pay all of his funeral expenses and have refused any contribution from the Public Treasury, La Prensa Latina reported.

Hundreds of workers fled businesses in northern Haiti on Wednesday after demonstrations near Jovenel’s hometown grew violent ahead of his funeral.

Witnesses said one man was shot dead in the community of Quartier-Morin, which is near Trou-du-Nord, where Jovenel was born, the Associated Press reported.

Roadblocks were set up between the two communities, temporarily barring cars from entering or leaving as two plumes of thick, black smoke rose nearby. 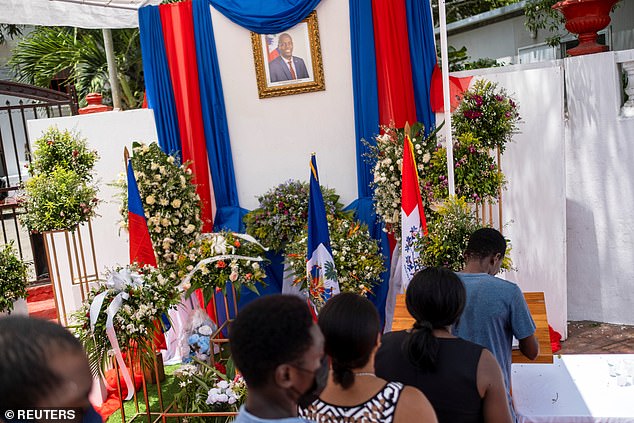 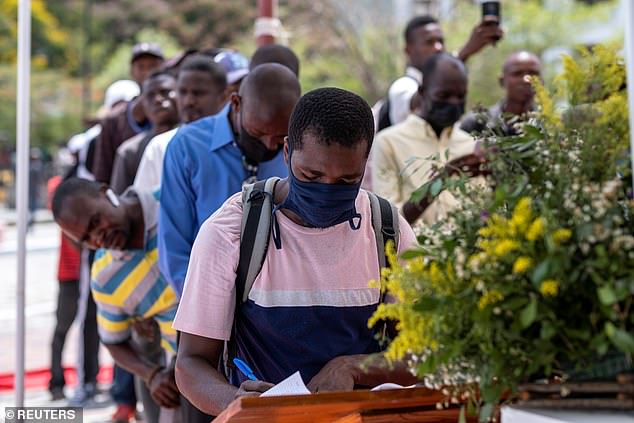 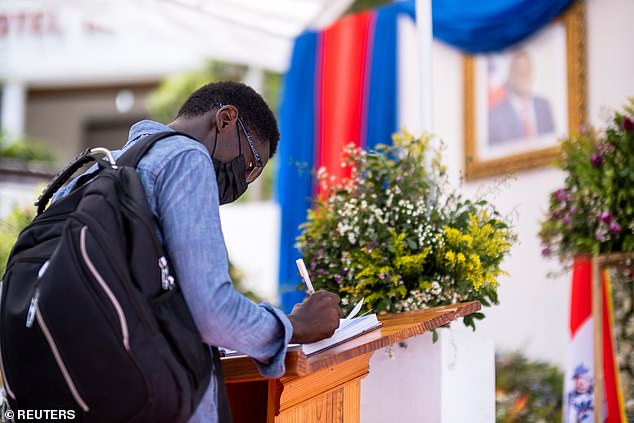 Many workers walked hurriedly in a single file along the main road that connects Quartier-Morin with Cap-Haitien, the city where events to honor Jovenel were scheduled to start on Thursday ahead of Friday’s funeral.

Fleeing people said they saw burning tires and men with weapons demanding justice for Jovenel. One woman who was out of breath said the armed men told her, ‘Go! Go! Go!’ as employees clad in uniforms of all colors obeyed and left the area. She declined to give her name, saying she feared for her life.

Abnel Pierre, who works at the Caracol Industrial Park, said he was forced to walk 45 minutes home because the bus that transports employees was stuck behind blockades. He declined further comment as he walked swiftly toward his house as the sky began to darken.

The violent demonstrations came a day after Ariel Henry was sworn in as the country’s new prime minister, pledging to form a provisional consensus government and to restore order and security. 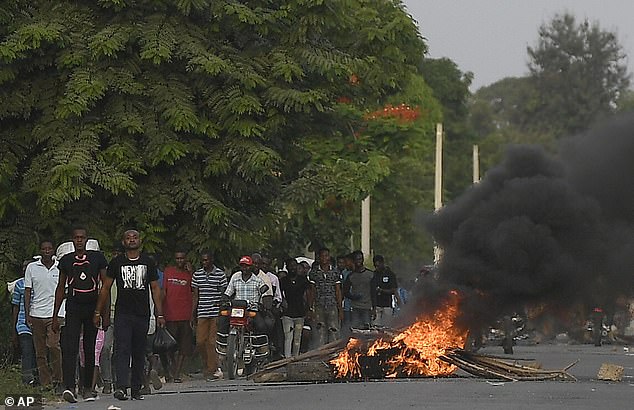 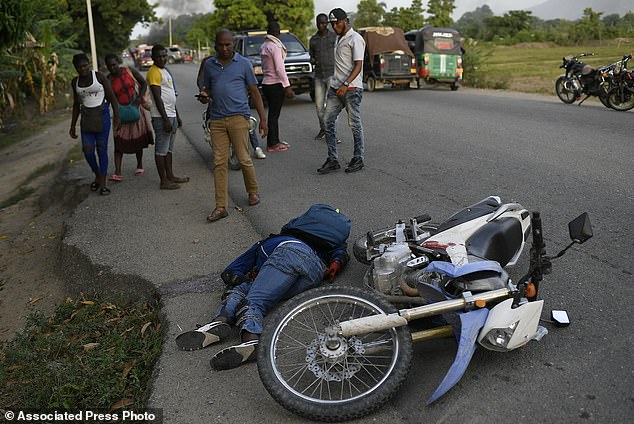 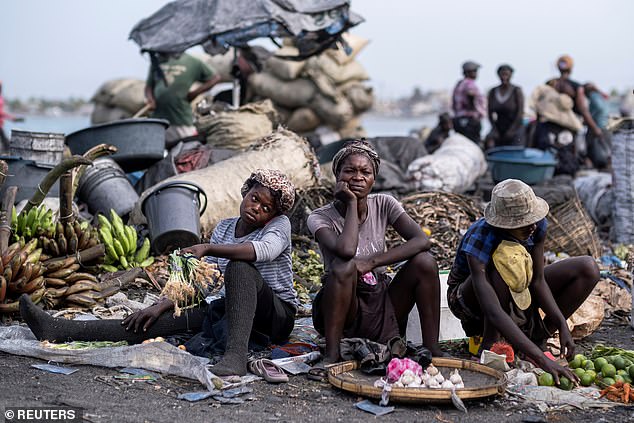 Martine Moïse, while wearing the sling and a bulletproof vest, had been greeted by interim prime minister Claude Joseph as she returned to Haiti on Saturday, secretary of state for communications Frantz Exantus wrote on Twitter.

Exantus posted pictures of Martine Moise disembarking from a private plane accompanied by multiple security agents after she spent 10 days in hospital in Miami where she had been air lifted after her husband was gunned down.

Authorities have said at least 26 suspects have been detained as part of the investigation into the assassination, including 18 former Colombian soldiers and three Haitian police officers. At least seven high-ranking police officers have been placed in isolation, but not formally arrested, Police Chief Léon Charles has said.

On Wednesday, Colombia’s government said it would have a consular mission in Haiti on July 25-27 to help the detained ex- soldiers and repatriate the bodies of the three others killed by Haitian authorities in the aftermath of the assassination.

Colombia’s police chief Jorge Vargas has said that a former Haitian justice ministry official, Joseph Felix Badio, gave two of the Colombian mercenaries the order to kill the president. It is not clear if Badio in turn was following orders from someone else.

Badio, a former official in an anti-corruption unit within the justice ministry, is one of several people wanted by Haitian police, alongside former opposition senator Joel John Joseph. Both are described on their wanted posters as ‘armed and dangerous.’

Haitian police have accused Christian Emmanuel Sanon, a 63-year-old Haitian doctor with strong ties to Florida, of being a mastermind of the plot and having ‘political objectives.’

A Pentagon spokesperson told the Columbus Ledger-Enquirer on Tuesday that four of the Colombian veterans involved in the assassination received U.S.-funded military training at the Western Hemisphere Institute for Security Cooperation (WHINSEC) at Fort Benning.

The outlet obtained Defense Department and State Department records that show seven Colombians total took part in the training while serving in the Colombian military between 2001 and 2015. The men also attended seminars in Washington D.C.

However, the Defense Department did not release the names of the four men allegedly involved in the assassination who trained at Fort Benning – which is near Columbus, Georgia, the Ledger-Enquirer reported.

Hoffman told the outlet that all of the WHINSEC courses at Fort Benning included training in human rights and ethics.

Fort Benning is home to more than 120,000 soldiers, civilian employees and their families as one of the nation’s largest military posts.

It also serves as one of the five bases where the U.S. Army conducts basic combat training for new soldiers, and is home to the branch’s Airborne and Ranger schools.

The base’s WHINSEC school opened in 2001 and trains 1,200 to 1,900students each year mostly from across the Americas in an effort to build relationships with U.S. partner countries and champion human rights and democracy.

Those eligible to join the training program are evaluated by the U.S. Embassy in their home country along with a further review by the State Department, according to the school’s website.

However, U.S. law dictates that students who graduate the program cannot be tracked after they return home.

‘When students return to their own countries, the U. S. military groups there maintain ties with them as part of the U.S. military-to-military engagement plan,’ the school’s website reads.

‘There is also a report to Congress each year on all U.S. education and training of foreign students; the report includes any known illegal activity by former students.’