A delivery driver high on cocaine who stabbed to death a French tourist was jailed for life today.

Nicholas Foy, 39, had snorted four-and-a-half grams of coke in a 24-hour drink and drugs binge when he ran up to nuclear scientist Laurent Volpe, 49, wielding a kitchen knife and wearing nothing but pink shorts.

He plunged the large knife into his stomach, which passed through Mr Volpe’s liver before threatening passers-by yelling ‘do you want some?’

Mr Volpe, who was on a two-week holiday with his wife Cecile Chapais and their two children, collapsed at the scene in Eltham, south-east London shortly before 7pm on August 11 last year.

Mr Volpe, an accomplished triathlete from the south of France, had spent the day sightseeing with his family.

They returned to Eltham, where they were staying through a house swap and Mr Volpe popped to a nearby Co-op to get food.

But on his way back when he bumped into dad-of-three Foy. When police arrived Foy punched an officer before he was Tasered and arrested.

Foy had consumed five pints of lager, a litre of Jack Daniel’s whiskey and rum, and taken up to four-and-a-half grams of cocaine before leaving the house

And as he was taken to hospital for treatment to self-inflicted knife wounds to his foot, he headbutted another officer and had to be sedated by medical staff.

Paramedics took Mr Volpe to Kings College Hospital in a critical condition but died three days later despite having a liver transplant.

Foy admitted manslaughter, claiming a lack of intent, but denied murder but was convicted of murder at the Old Bailey on Monday. He was jailed today for life with a minimum of 17 years.

In the days before the attack Foy, who suffers depression, had not taken his medication, and chose to self-medicate with cocaine and alcohol instead, the judge said. 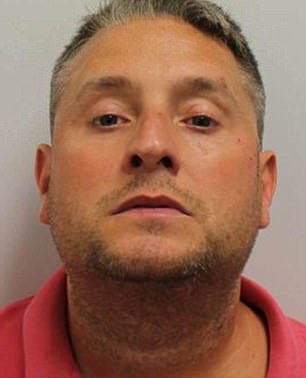 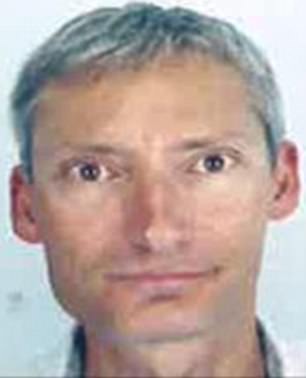 Foy, left, plunged the knife into the stomach of Mr Volpe, right, who later died despite a transplant

He had consumed five pints of lager, a litre of Jack Daniels whiskey and rum, and taken up to four-and-a-half grams of cocaine before leaving the house at 6.45pm.

Judge Sarah Munro QC said: ‘You took with you a large kitchen knife, going back and forward across the road to gouge your foot, believing there was a bomb.

‘Cecile Chapais lost her partner, two children lost their father, a brother his sibling, and a mother her son as a result of your selfish and murderous act.

‘He was a respected scientist and an accomplished triathlete. He was a loving father.

‘His children no longer have a second parent to whom they can turn.’

His wife described him as ‘smiling, kind, passionate and full of life’ in a statement.

Foy was seen screaming at passers-by ‘do you want some?’ after he plunged the knife into his victim’s stomach 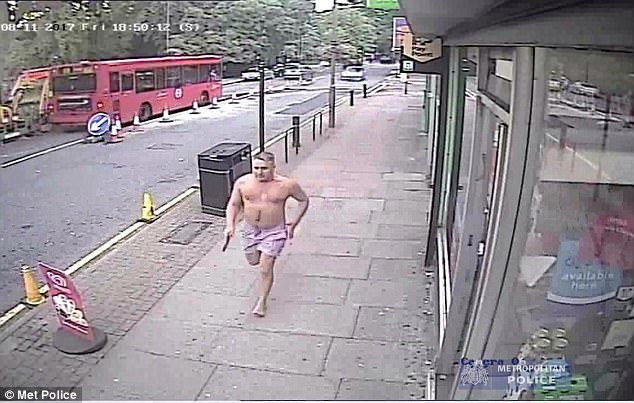 His son said, ‘I don’t have a dad anymore’, while his daughter added, ‘there is no word to describe how I feel’.

Judge Munro said: ‘Madam Chapais now has to do the job of two parents on her own, and at the same time hold down her job as the sole remaining breadwinner in the family. 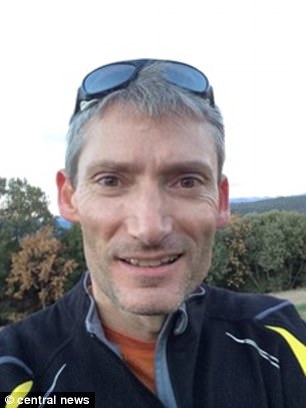 ‘Laurent Volpe’s mother has suffered the ultimate loss – the loss of a child.

‘You had spent the previous evening, night and morning of the 11th of August filling yourself with alcohol and cocaine.

‘You took all that knowing the combination could make you angry, paranoid, aggressive and violent.

‘You have a longstanding history of drink and drug abuse. You started taking cocaine aged 17, and took the drug daily until 2013.

‘You also told the jury you have had a problem with alcohol for two years. Your records suggest it was a lot longer.

‘You have also suffered depression for many years. Your depression is of some significance.

‘But what is of most significance is that in the days prior to the murder, you chose not to take your medication, deciding instead to self medicate with drink and cocaine.

‘You deliberately combined a large amount of alcohol with very significant amounts of cocaine in a binge which lasted about 24 hours.

‘You knew to combine the two could make you paranoid, violent and dangerous.

Foy had not only failed to take medication for depression, but had decided to self-medicate using cocaine and alcohol

‘You took an extremely large knife out into the street when you were in a state of self-induced extreme intoxication.

‘You held the knife out as you ran and deliberately stabbed a complete stranger in the abdomen, causing his collapse and death.’

In mitigation Orlando Pownall QC, defending, said: ‘Everything that happened happened during the course of what was undoubtedly a psychotic or paranoid state.’

He said Foy, who has previous convictions for common assault, had showed ‘genuine’ remorse, while his partner described him to the court as an ‘amazing father’.

His partner sobbed and was comforted by their son as Foy was led from the dock.