The federal government is pressuring state premiers to keep their borders open this year with an extraordinary new scheme to subsidise inter-state flights by 50 per cent.

The half-price tickets will go on sale on April 1 as part of a $1.2billion package to boost the ailing tourism sector when JobKeeper finishes at the end of March.

But flights within each state and territory are not included, meaning any premier who shuts their border will lock their businesses and workers out of the scheme.

These are the 13 places that Australians can fly to and from on half-price tickets from April 1. But they must fly interstate 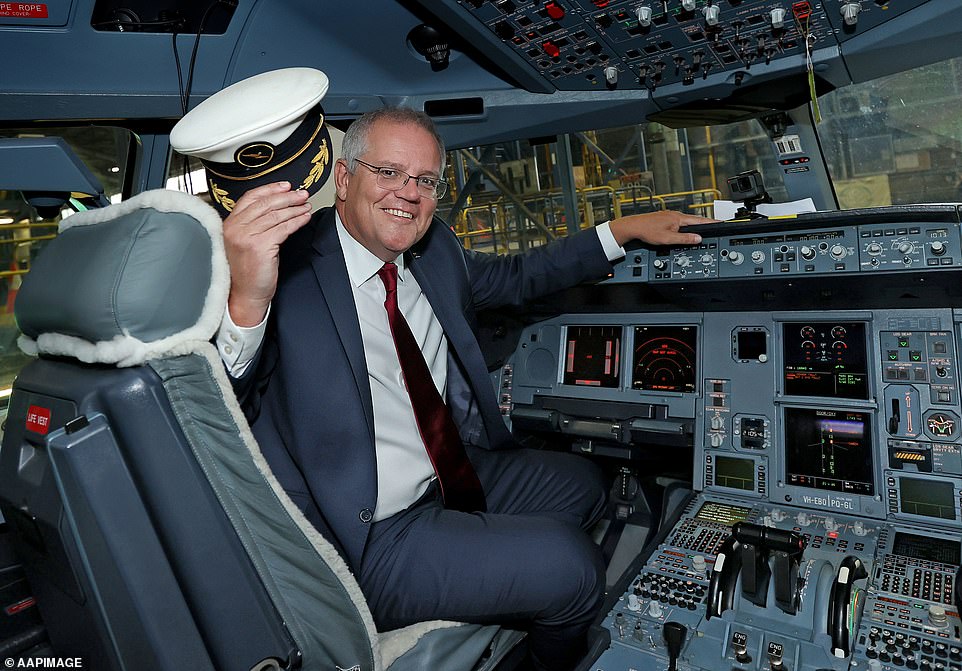 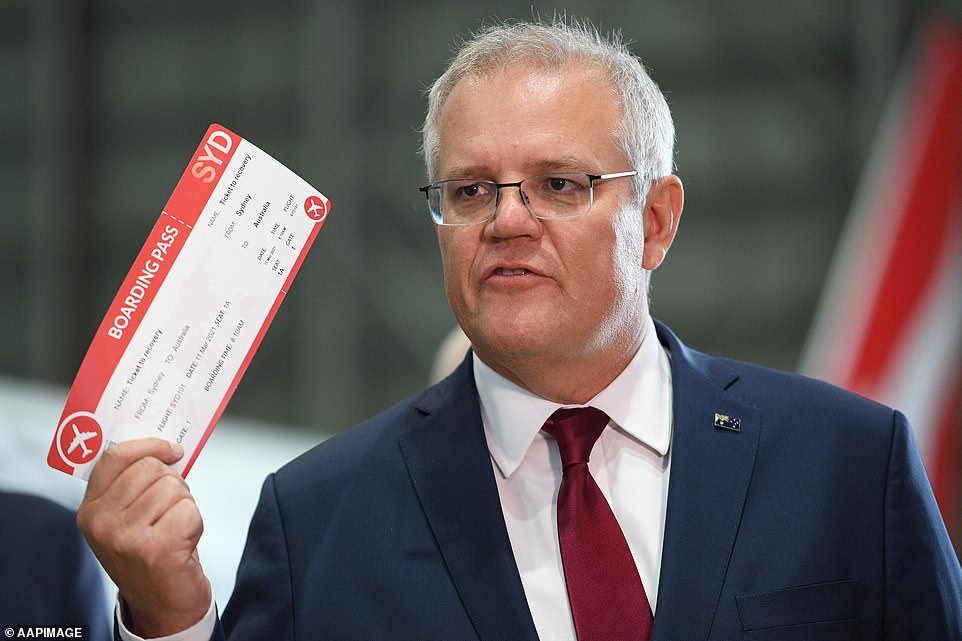 The half-price tickets will go on sale on April 1 as part of a $1.2billion package to boost the ailing tourism sector when JobKeeper finishes at the end of March. Pictured: Mr Morrison holds a novelty ticket

‘I think it is an incentive for the states to keep their borders open. And that’s important, because we can’t keep on going through the yoyo of the ups and downs of that,’ Qantas boss Alan Joyce said on Thursday.

Tourism Minister Dan Tehan said ‘premiers will have to play ball with us’ and warned them not close their borders at the first sign of a Covid-19 outbreak like they did last year.

‘We need states and territories to do their part by agreeing to a nationally consistent approach to using border closures and lockdowns as a last resort on medical advice,’ he said.

Qantas and Jetstar had to cancel 1,500 flights when states closed to Sydney residents following a handful of cases on the Northern Beaches in December.

Prime Minster Scott Morrison has insisted the rollout of the Covid-19 vaccine reduces the health risk so state premiers will find it harder to justify border closures.

‘In 2021, what’s appropriate with state borders is completely different [from last year], particularly with the vaccination program rolling out. And both of the airlines have said pretty plainly that for this to work best the states have to keep their borders open,’ he told Nine’s Today Show on Thursday morning.

Queensland Treasurer Cameron Dick said his state reserved the right to shut its border and would not guarantee keeping it open.

‘We will act on the health advice… that’s been consistent the position we’ve taken all along and of course that was endorsed by the people of Queensland in the election last October,’ he told ABC Radio National.

He complained that the scheme did not allow intra-state flights. ‘People want to go, in Brisbane and in the southeast, they want to go to Cairns but this scheme says no. Instead, we have to go to places like Launceston, or Merimbula.’ 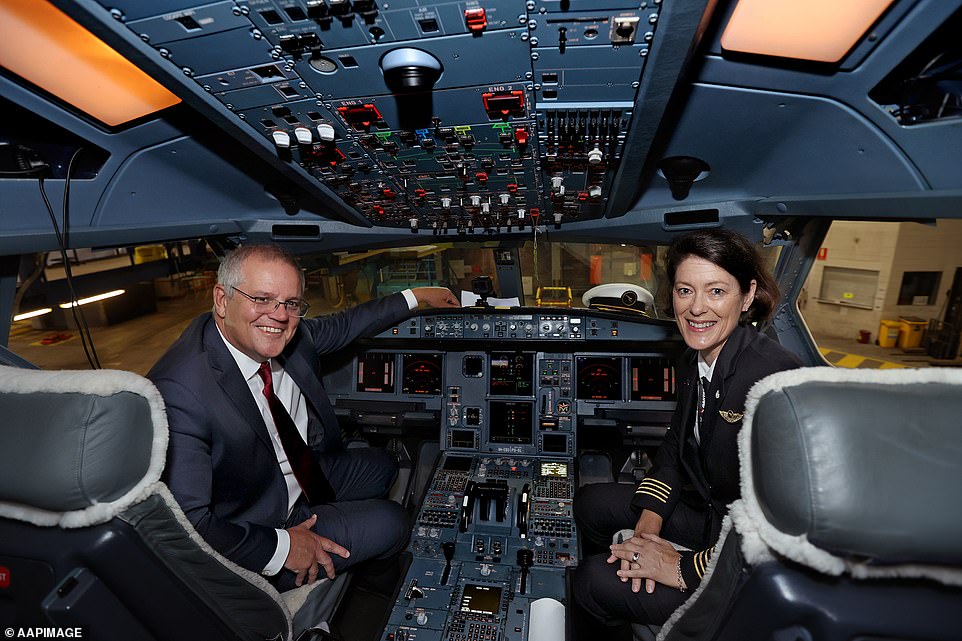 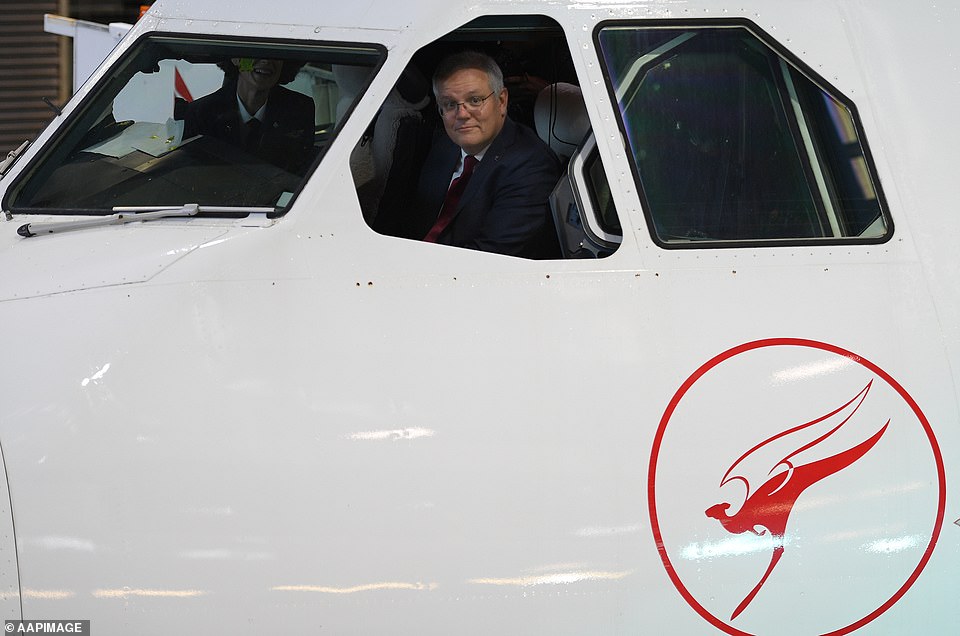 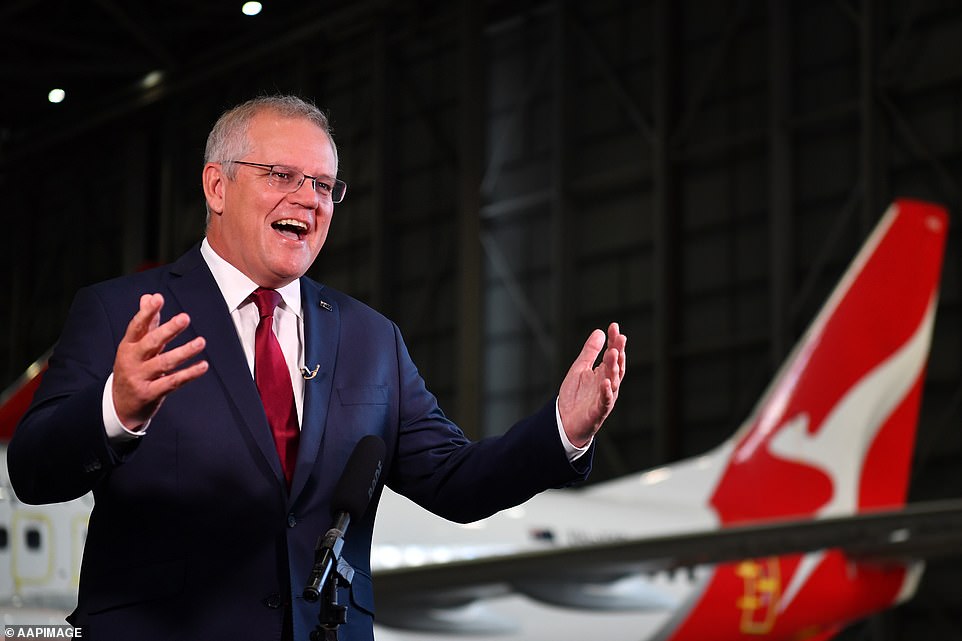 Tickets to and from 13 holiday hotspots will be subsidised by the federal government until July 31 and airlines will ramp up their flight schedules to deal with an expected surge in demand over the next three months.

The locations on offer are the Gold Coast, Cairns, the Whitsundays and Mackay region (including Proserpine and Hamilton Island), the Sunshine Coast, Lasseter and Alice Springs, Launceston, Devonport and Burnie, Broome, Avalon, Merimbula, and Kangaroo Island.

Some 57 routes will be covered on the Qantas and Jetstar network, CEO Alan Joyce said on Thursday morning.

The discount means a return ticket from Sydney to Cairns which currently costs $233 could be as little as $116.50.

A return between Melbourne and the Gold Coast, which is now on sale from $130, could cost just $65.

To get their half-price tickets, Australians simply need to head to the Qantas, Jetstar or Virgin websites after April 1 and they will see the dramatically reduced fares.

The discount only applies to inter-state travel, not intra-state flights – but these could later be added to the scheme which is expected to evolve to match demand. 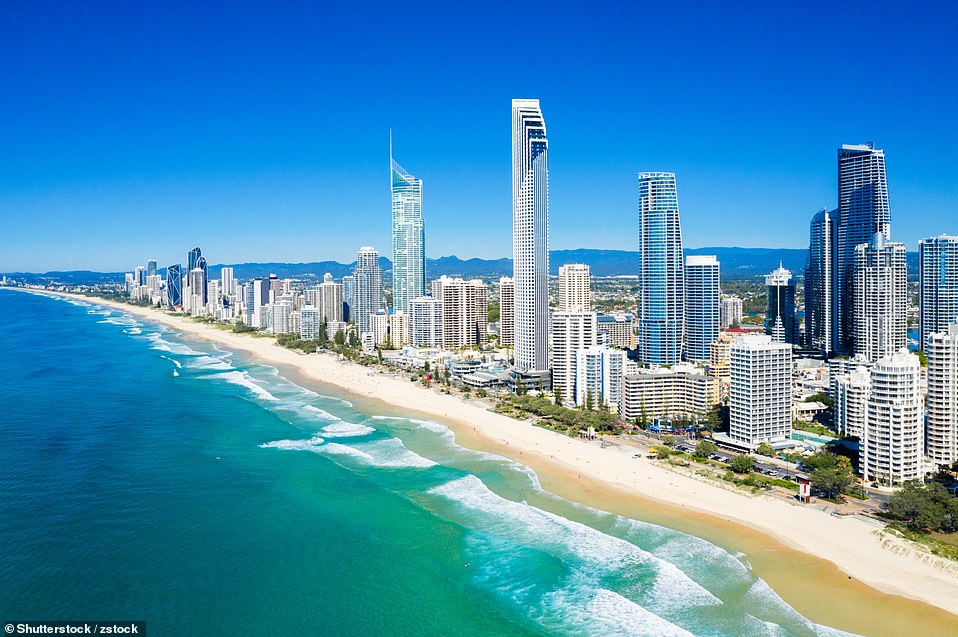 Almost a million airline tickets will be go on sale at half price on April 1 under a $1.2billion package to boost the ailing the tourism sector. Flights to the Gold Coast (pictured) could be as cheap as $49

There will be no limit on the number of tickets available but the government expects an average of 46,000 people per week – a total of about 800,000 – will fly on the subsidised flights.

Amid a stark warning that 100,000 people could be fired when JobKeeper ends, the government will also give monthly payments to airlines to retain 8,600 international workers such as pilots and cabin crew until October 31 when the border is expected to re-open with every Australian vaccinated.

Mr Joyce said he expects 22 of 25 Qantas international routes to restart in October alongside all 13 Jetstar routes -but he’s prepared to start earlier or wait longer depending on the Covid-19 situation. 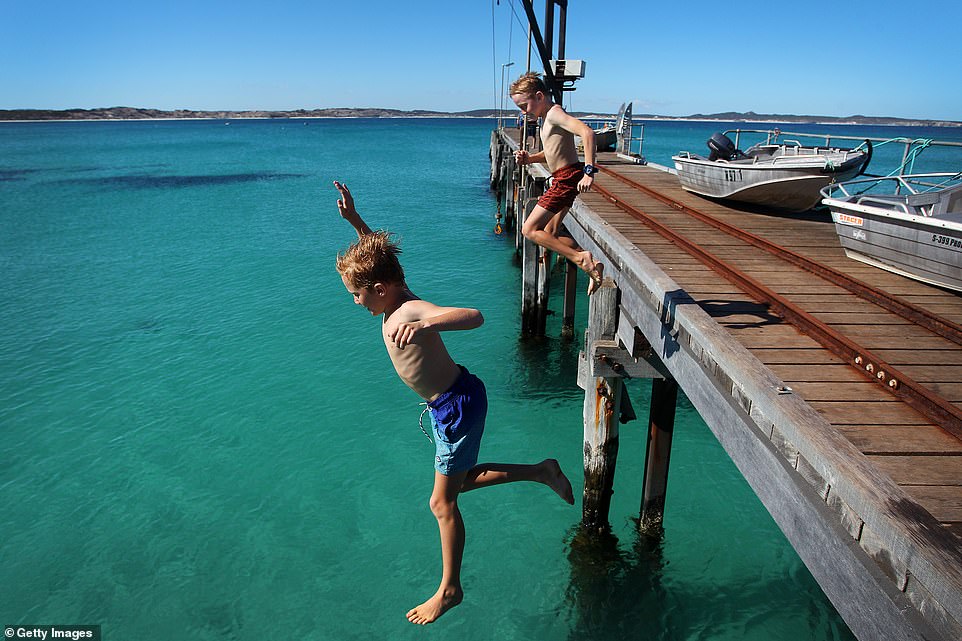 To get their half-price tickets, Australians simply need to head to the Qantas, Jetstar or Virgin websites after April 1 and they will see the dramatically reduced fares. Pictured: Kangaroo Island

Also in the package, companies getting JobKeeper payments will be offered a government-backed 10-year loan of up to $5million, with no repayments due for two years.

Some 350,000 employees now on JobKeeper could have their wages subsidised by the loans if their company decides to take one.

‘This will take more tourists to our hotels and cafes, taking tours and exploring our backyard,’ he said.

‘That means more jobs and investment for the tourism and aviation sectors as Australia heads towards winning our fight against Covid-19 and the restrictions that have hurt so many businesses.

‘Our tourism businesses don’t want to rely on government support forever. They want their tourists back.

‘This package, combined with our vaccine roll-out which is gathering pace, is part of our National Economic Recovery Plan and the bridge that will help get them back to normal trading.’

‘The thing our tourism operators want more than anything is tourists so we need Australians to do their patriotic duty and book a holiday this year because every dollar spent on an Australian holiday is a dollar that supports a local job and a local business,’ he said. 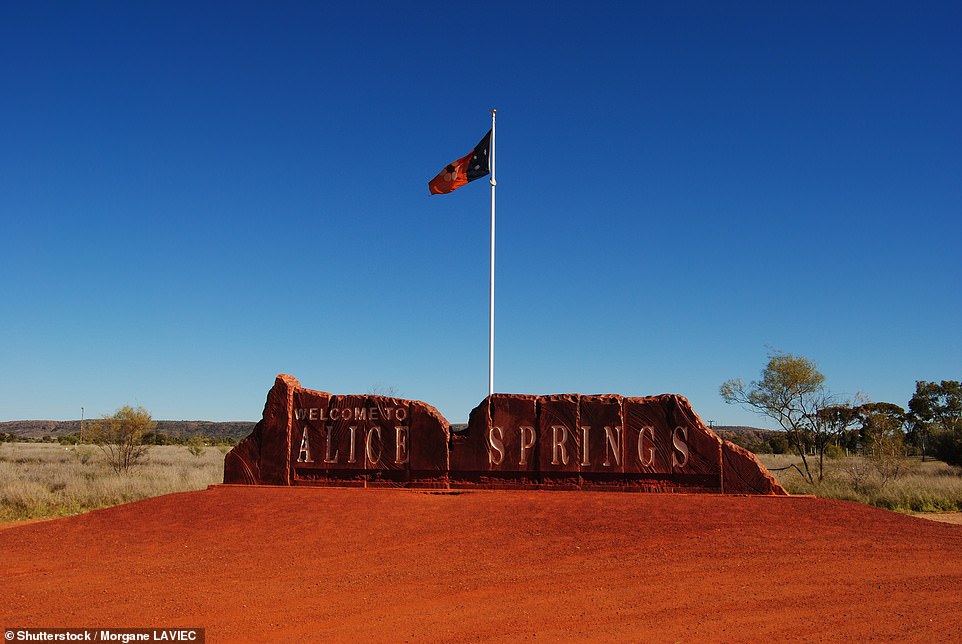 ‘We need states and territories to do their part by agreeing to a nationally consistent approach to using border closures and lockdowns as a last resort on medical advice,’ he said.

The government is also extending a range of existing support policies to help the economy recover after its first recession since the early 1990s.

The $50million Business Events Grants Program will be extended by three months to help companies hold multi-day business events by covering up to 50 per cent of costs.

The $94.6million Zoos and Aquarium program will be extended by six months to support zoos, aquariums and wildlife parks to maintain their animal populations where their tourism revenue has been affected by travel and social distancing restrictions.

And the Covid-19 Consumer Travel Support Program will also be extended for three months beyond March 13.

The policies are designed to assist businesses when the JobKeeper subsidy ends almost a full year after it began.

Labor says the scheme is being taken away too soon, but the government says it distorts the economy by stopping workers filling available jobs and keeping businesses afloat that would ordinarily go under.

The prime minister expressed his frustration earlier this week that 54,000 jobs in regional Australia – including at pubs cafes and farms – are going begging. 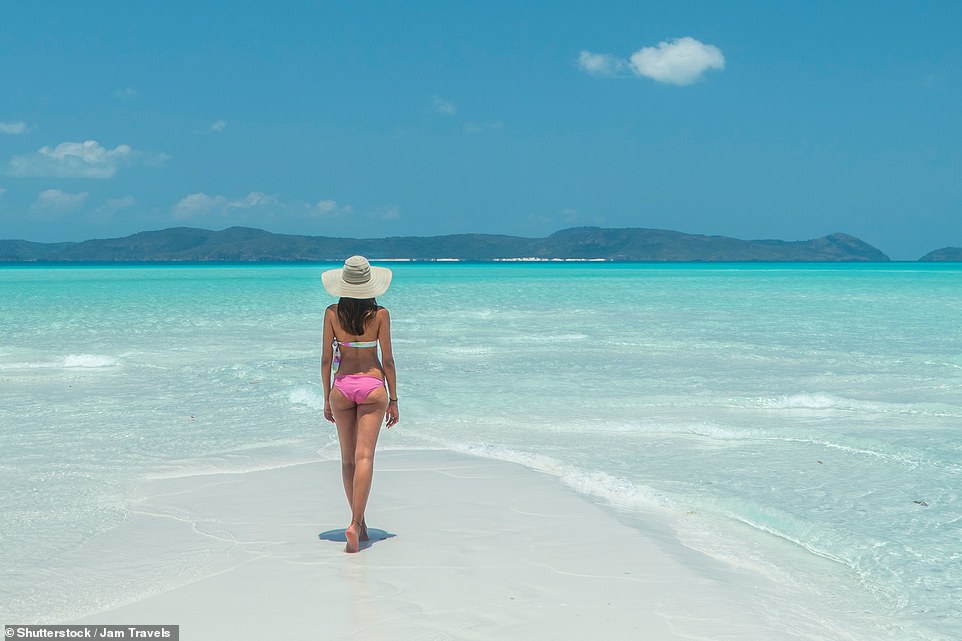 Prime Minster Scott Morrison said the package was Australia’s ‘ticket to recovery’. Pictured: A tourist at the Whitsundays

How does the new loan system work?

The loans will be granted under an expansion of the existing SME Loan Guarantee scheme to companies that come off JobKeeper between January and March this year.

Maximum loan terms will be increased from five to 10 years, with a repayment holiday of two years.

The government guarantee will increase from the current 50/50 split between the Government and the banks to an 80/20 split.

The scheme can be used to refinance existing loans. Loans must be approved between 1 April 2021 and 31 December 2021

Some 85 per cent of jobs taken away by the Covid recession have returned and around 2.7million people at 650,000 businesses have come off JobKeeper.

Around 20 per cent of the companies still heavily relying on the payment are in the sectors of Cafes and Restaurants, Travel Agencies and Tour Arrangement Services, Accommodation, and Air and Space Transport.

Treasurer Josh Frydenberg said this latest package of measures will tide companies over until the economy fully recovers.

‘We know there are sectors and regions across the country that are continuing to do it tough, which is why we will continue to support the economy with proportionate, timely, scaleable and targeted assistance,’ he said.

‘Our support for the aviation sector will not just keep planes in the air but will also provide a boost to domestic tourism while our international borders remain closed.

He added: ‘The SME Recovery Scheme is part of the next step in our plan to help small businesses stand on their own two feet as the economy recovers from Covid-19.

‘The expansion and extension of the loans will back businesses that back themselves and will help businesses who continue to do it tough build a bridge to the other side of the crisis and keep their staff employed.’

What measures is the government taking to support the economy after JobKeeper ends?

o To run from 29 March to 30 September and cover the cost of ground handlers maintaining their mandatory training, certification, and accreditation

The following schemes are also being extended:

It comes after an ongoing dispute between Treasurer Josh Frydenberg and Queensland Premier Annastacia Palaszczuk over support for tourism.

In January Ms Palaszczuk visited struggling tourism businesses in Cairns and asked the federal government to extend the $100billion JobKeeper scheme beyond March 28.

But she was rebuked by Mr Morrison  and criticised for crippling small companies with her sudden border shutdowns throughout the pandemic.

Mr Frydenberg said the federal government has done the ‘bulk of the heavy lifting’ to support Queenslanders and Ms Palaszczuk should open her own wallet. 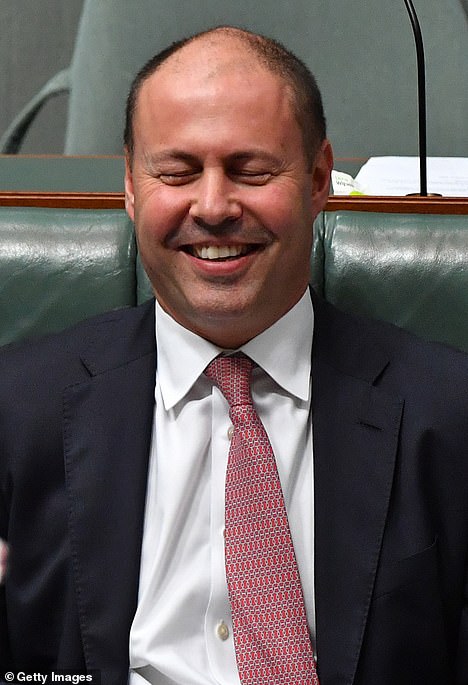 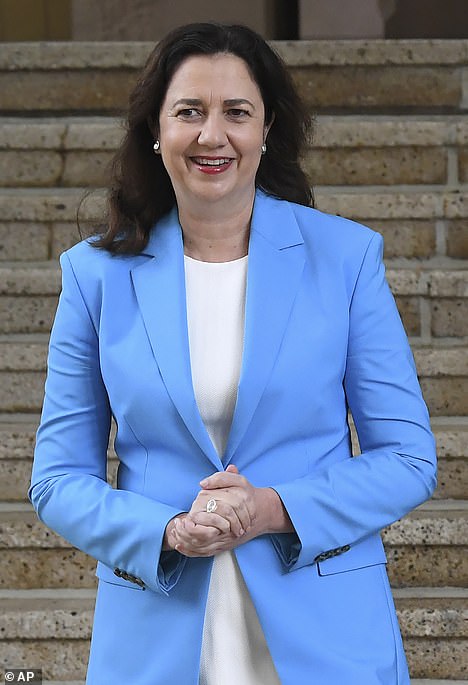 He said the federal government has given $28.5billion to Queenslanders in the past year, while the premier has only committed $8.8billion across the next four years.

Mr Frydenberg also accused the premier of ‘grandstanding and petty politicking’ before Ms Palaszczuk hit back and said he should visit Cairns.

On Monday the treasurer flew up to the north Queensland town and met with business owners, telling a press conference that he would announce support measures later in the week.

He explained that JobKeeper cannot continue because it stops workers moving to more productive roles and keeps businesses afloat that would otherwise go under even without coronavirus.

What is the JobKeeper scheme and why is it ending?

The government handed companies who demonstrated a certain revenue deduction cash to help them maintain staff even if there was no work.

However, with lockdowns over and the economy well on the way to recovery, the government decided to end the scheme on March 28, almost a full year after it began.

Labor says the scheme is being taken away too soon, but the government says it distorts the economy by stopping workers filling available jobs and keeping businesses afloat that would ordinarily go under.