Six years after laying the foundation for their dream home, an Aussie couple’s life has turned into a ‘nightmare’ as the art deco house remains unfinished, $150,000 over budget and riddled with problems.

Landscaper Terry Condon contracted building firm Hallbury Homes to start work on the project in 2017, with the home outer south east Melbourne suburb of Harkaway, scheduled to be completed in 2020.

There were major issues from the get-go and now the couple have no idea if their half-built house will ever be finished.

Hallbury Homes filed for bankruptcy on January 4 owing about $7million to creditors and leaving a string of despairing customers like the Condons in the lurch.

‘This was my dream,’ Mr Conder told Daily Mail Australia. I designed it with my wife and it’s been a nightmare.’

During an inspection in 2020 before Mr Conder’s house was originally meant to be handed over, he noticed green mould growing on the floor

‘I have gone out there and just sat for an hour thinking ‘what am I going to do?’.’

‘My wife had a breakdown about a year ago over it.

‘She couldn’t go near the place, couldn’t drive past, got the shakes, had to get time off work.’

The firm’s administrator Michael Caspaney, of Menzies Advisory, said the company had been working on 42 sites with 52 projects when it collapsed with 20 staff affected.

Experts warn the trend will continue in 2023 with runaway inflation and shortages of material and labour still plaguing the industry due to Russia’s invasion of Ukraine and lingering supply chain breakdowns in the wake of the Covid pandemic. 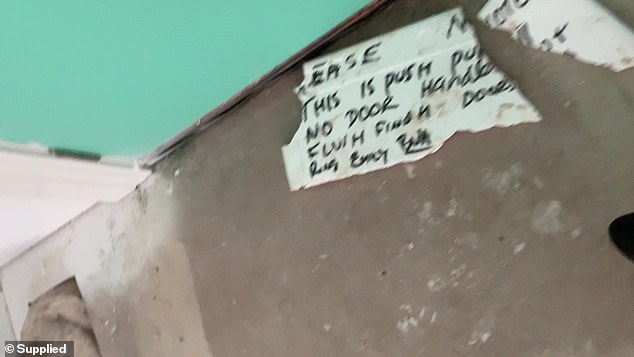 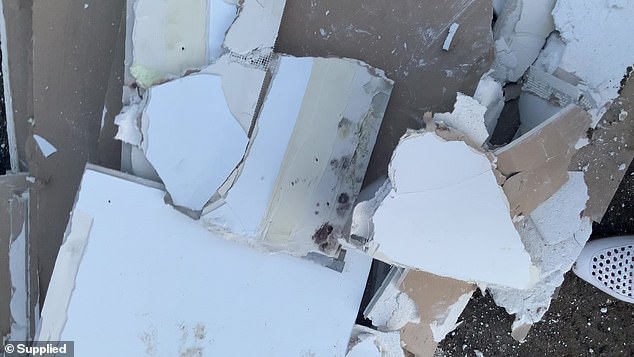 During an inspection in 2020 before Mr Conder’s house was originally meant to be handed over, he noticed green mould growing on the floor.

He said within a week it was ‘black and furry’.

‘I said to them ‘this is actual mould growing everywhere’,’ Mr Conder said.

‘The construction supervisor said it was wood stain.

‘We then had three inspections done that said it was mould.

‘The reports said the house was riddled with mould. It was absolutely putrid inside the walls.’

Mr Conder said at every step Hallbury bosses hounded him and Andrea for more money or tried to bully them into accepting shoddy work.

Their behaviour became so intimidating Mr Conder said he asked his son to come with him on inspections. 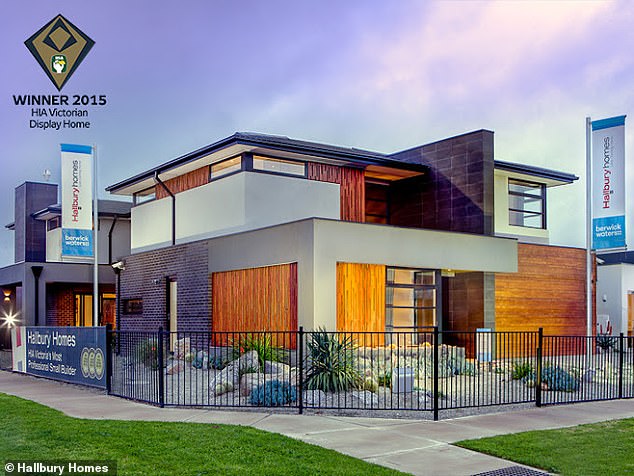 A display house built by Hallbury Homes, which is the first major builder to go into liquidation for 2023

‘You would go there and four or five of them would try to bully you into submission to say ‘this is how it is going to be’,’ Mr Conder said.

At one stage Mr Conder said he was forced to video the damage being done by water pouring under the balcony.

He discovered the builder had put giant heaters underneath of the house to dry it out, while charging the Conders for the electricity bill of running them 24/7.

However that was only the start of problems with the house.

‘We haven”t been picky saying ‘there’s a scratch here’ or this or that,’ Mr Conder said.

‘We are talking major things that have been wrong.’

The house has not been built to the specified height, he claims, with the 11 supporting brick piers holding up the house not-compliant with building standards.

Two bathrooms are also not fitted properly and both need to be ripped out.

‘Benchtops also will need to be ripped out, LED lights have been put in the wrong place, there is wrong and mis-matched painted colours throughout.’ 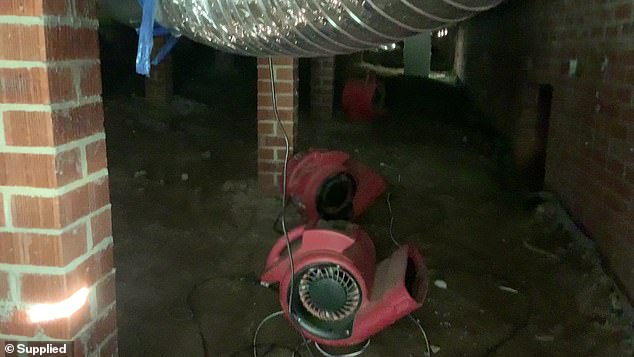 A door going underneath the house that has been replaced nine times.

Mr Conder and his wife have been renting since 2017.

He had hoped to move into the new house with his mother and father-in-law two and a half years ago.

Now both the ageing parents are unlikely to be able to make the move. 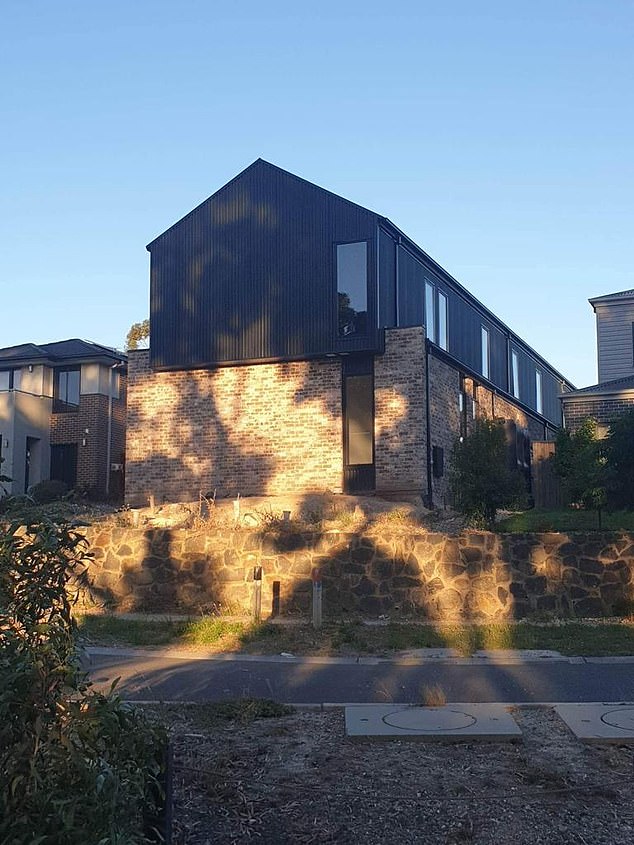 ‘I have been sleeping on the floor for five years on a mattress,’ Mr Conder said.

All the white goods and furniture they hoped to put in the new house is either stacked in their rental home or in storage, with Mr Conder saying much of it is now ‘half-ruined’.

He places part of the blame on the state’s building watchdog who had received his and other complaints against Hallbury but had not acted.

‘There’s no one policing builders in Victoria,’ he said.

Another Hallbury customer Rebecca Schrader said her in the outer west Melbourne suburb of Sunbury also had mould issues. 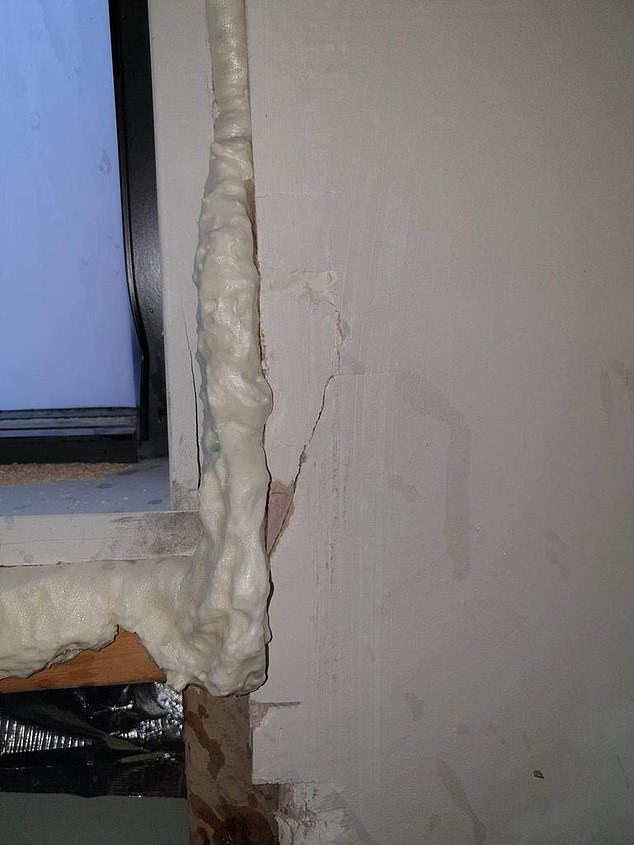 She said the company pressured her for payments despite not having met the work thresholds, uneven walls, plastering cracks and numerous other issues.

‘I had to fight so hard for something I shouldn’t have to fight hard for because all we’re asking for is what’s in the contract and the minimum standards – nothing more, nothing less,’ Ms Shrader told The Australian.

‘When people come to my house, they tell me that the house looks five or six years old because of the poor workmanship.’