A Halloween display featuring a Donald Trump ‘Burn in Hell’ gravestone and a fake corpse has one New York neighborhood outraged in the run-up to the holiday.

Fabian Vergara’s Halloween decoration has drawn a lot of attention in recent days, as neighbors weigh in on whether the display on his front lawn is appropriate.

The controversial exhibit located in Westchester county features a fake crime scene with a corpse rolled up in a garbage bag surrounded by yellow police tape, according to local broadcaster Westchester 12.

‘I’m doing it for fun. It was a joke, ‘ Vergara told the nightly news caster. ‘I like Halloween, so I don’t see anything wrong with that. It’s a free country.’

But not all of Vergara’s neighbors agree, with one saying the decorations are inappropriate and tasteless.

Theresa Gucciardo-Perry believes the imagery in front of her neighbor’s house is repulsive and has asked Cortlandt community officials to force Vagara to remove the display.

‘I want to know how far freedom of speech goes,’ she said, demanding that Vagara also be banished from the community.

‘Fabian needs to be removed from the neighborhood,’ she told the broadcaster. 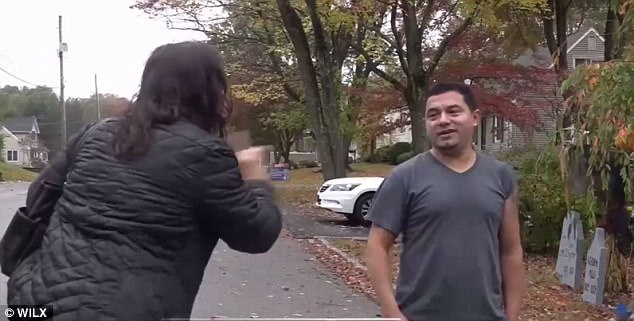 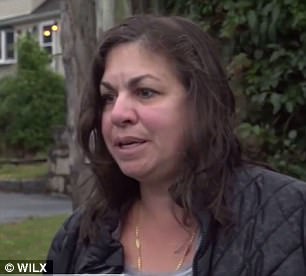 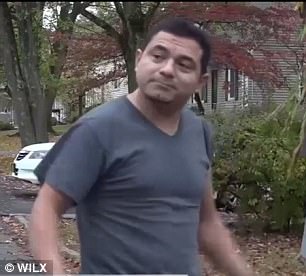 Things between the two neighbors intensified on Tuesday when Gucciardo-Perry confronted Vagara while Westchester 12 aired their report.

Vagara, a native of Ecuador who holds US citizenship, said he was apologetic and would accommodate Gucciardo-Perry’s request to remove the display.

He changed his mind, however, after she told him: ‘If you don’t like the way we live in America, you need to leave.’

‘It’s not fair,’ Vagara said. ‘That’s not the right way to treat me, like that.’

Gucciardo-Perry said that she welcomed Vagara and his family to the neighborhood 10-months ago.

But now that the the holiday inside Cortlandt has become politicized, all that has changed.

‘Is this about Halloween or about you making a political statement?’ she said about the decorations. ‘You don’t like it here? Get the hell out.’

Gucciardo-Perry says that she wants to not only force Varaga to take down the decorations, but wants him banished from the community