‘The third movie is going to be called Halloween Cancelled!’ On-screen killer Michael Myers is branded ‘HOMOPHOBIC’ for murdering a gay couple in new film (but horror fans argue it is a sign of ‘equality’)

Michael Myers has been branded ‘homophobic’ for murdering a gay couple in the latest installment of the Halloween movie franchise.

The never-dying villain, who is known to be evil incarnate, is facing some backlash for his choice of victims in the new Halloween Kills film, which was released last week.

A scene from the slasher flick shows Myers offing a same-sex couple living in his childhood home, leading some Twitter users to accuse him of homophobia.

Say what? Fictional serial killer Michael Myers has been branded ‘homophobic’ following the release of the latest movie in the Halloween franchise 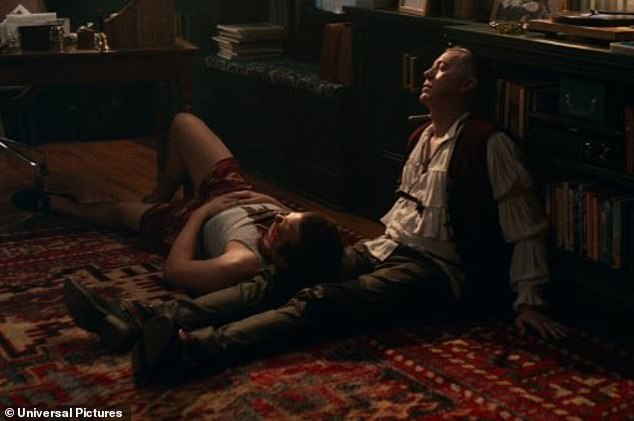 ‘Michael Myers is homophobic #HalloweenKills,’ one person tweeted, while another wrote: ‘Saw that new Halloween movie, didn’t expect Michael Myers to be so homophobic.’

‘HALLOWEEN KILLS WAS SO GOOD BUT WHY DID MICHAEL HAVE TO KILL THE ONE GAY COUPLE… MICHAEL MYERS IS HOMOPHOBIC CONFIRMED,’ someone else shared.

The Twitter user later added: ‘If it wasn’t already clear enough, this tweet was A JOKE so please stop attacking me.’

While some of the tweets calling out the masked murderer’s perceived prejudice were clearly in jest, they prompted a fierce debate. 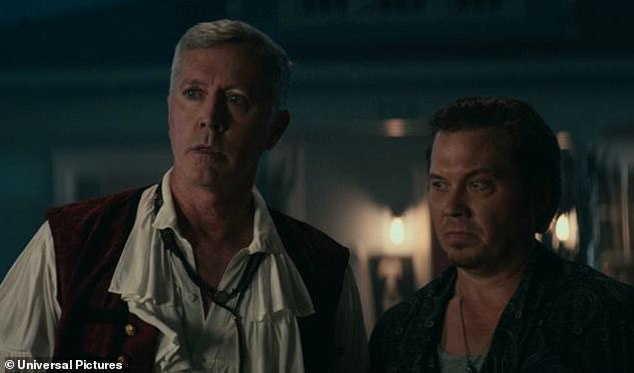 Going viral: The psychopath’s choice of victims prompted a fierce debate on Twitter this week 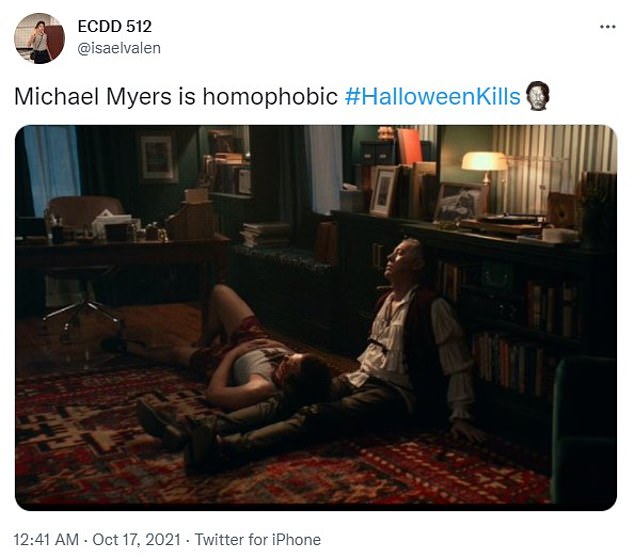 Backlash: People accused Myers of homophobia, though some of the tweets calling out the masked murderer’s perceived prejudice were clearly in jest

Outraged horror fans pointed out that Myers kills everyone he comes across  — with the exception of children.

‘Michael Myers been murdering mfs for decades but him being homophobic is where y’all draw the line,’ one person commented, while someone else noted that the killer isn’t homophobic, he’s ‘human-phobic.’

Others argued that it would be homophobic if Myers didn’t kill the gay couple because then he wouldn’t be treating them equally.

‘Equality is Michael Myers also killing gay people and treating them no differently than anyone else. The opposite would be homophobia,’ one person explained.

‘If he DIDNT kill them it would’ve been homophobic,’ someone else insisted. ‘Michael’s a mass serial killer it’s what he does. He kills everyone and everything that gets in the way of him killing his sister.’ 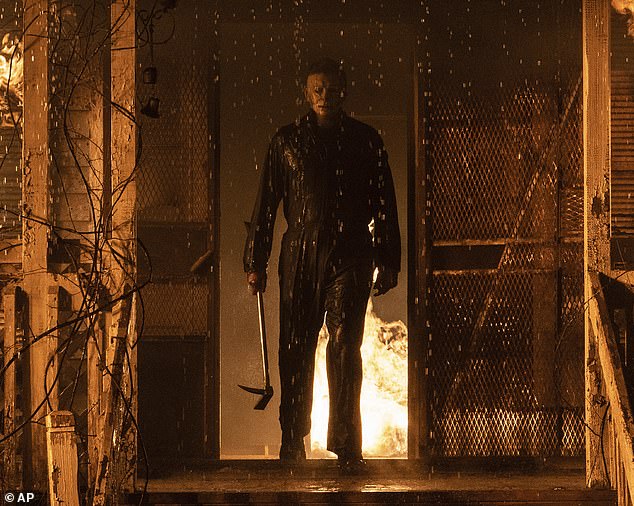 FYI: Outraged horror fans pointed out that Myers kills everyone he comes across with the exception of children 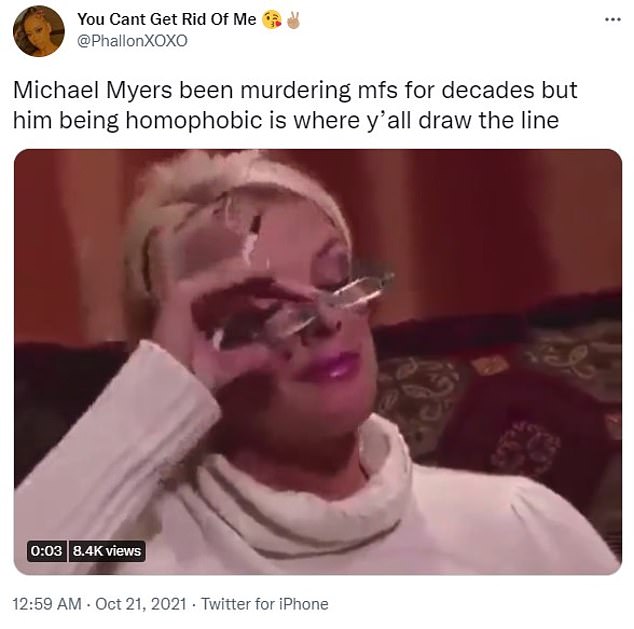 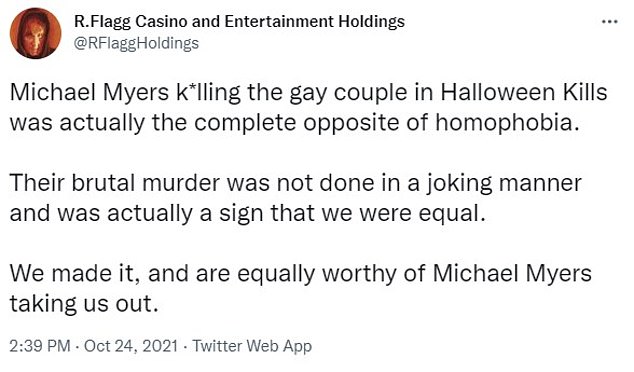 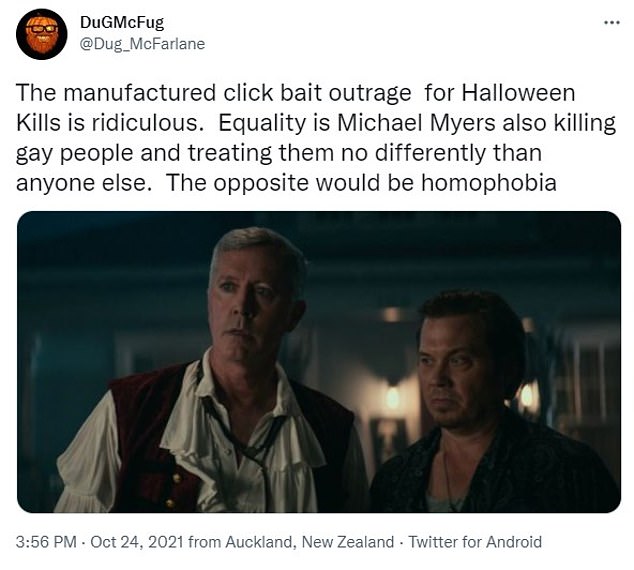 Argument: Others argued that it would be homophobic if the Halloween villain didn’t kill the gay couple because then he wouldn’t be treating them equally

An op-ed written by Aimee Hart for the LGBTQ publication Gayming made a similar point, saying ‘the way he handles the death of the gay couple in the latest film feels no different to how he butchers Bob, Annie, and Lynda in the original Halloween.’

‘Michael Myers origin is a mystery beyond him being the human form of pure evil. He kills because that’s just what he does,’ she wrote.

‘He is a man of blood and flesh (at least, from what we know so far in this remake) and the only thing that drives him is suffering and misfortune.

‘In a twisted and perverse way, Michael Myers is someone who values most people the same.’

A number of people were also amused by the backlash and couldn’t resist joking that Myers was about to get himself ‘cancelled.’

‘Michael Myers done made 50 movies and nobody can kill this man, homophobia bout to finally end his reign of terror,’ one person tweeted.

‘If Michael Myers doesn’t get ahead of this homophobia pr nightmare, third movie is gonna be called HALLOWEEN CANCELLED,’ another shared.