Halsey is the latest celebrity victim to be accused of cultural appropriation and this time it’s because she wore a mask that resembled a hijab.

The 23-year-old is currently on her world tour which is full of bizarre costumes but one of her recent looks from a New Zealand concert features the singer wearing a bedazzled headpiece that many people are saying resembles a veil worn by Muslim women.

Some people were seriously offended by her accessory choice as they were quick to bash her in the comments section of her photo but Halsey addressed all the haters insisting it was meant to look more like a ‘ninja mask’ than anything having to do with religion or culture.

Offensive: Halsey is the latest celebrity victim to be accused of cultural appropriation and this time it’s because she wore a mask that resembled a hijab 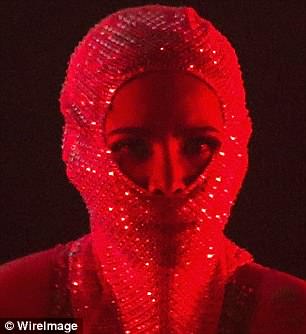 Mask: The 23-year-old is currently on her world tour which is full of bizarre costumes but one of her recent looks from a New Zealand concert features a bedazzled headpiece

Accusations: Thousands of people jumped to her comments section to accuse her of cultural appropriation of a hijab worn by Muslim women 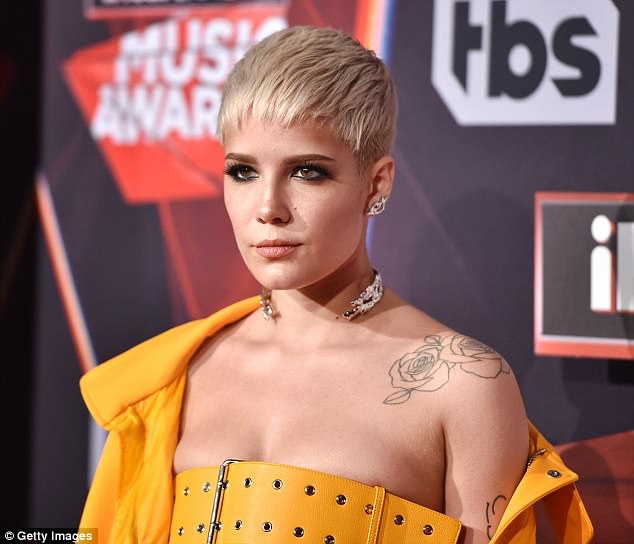 Fury: The singer prompted outrage online with her headwear, which actually appeared to be more like a balaclava than a headscarf

During Halsey’s recent concert for her Hopeless Fountain Kingdom World Tour in Auckland, New Zealand she debuted a sheer nude ensemble featuring a crystal embellished bodysuit and a matching mask to go with it.

The crystal embellished headpiece she is seen wearing is a one-piece slip on mask that covers most of her face except for her eyes and nose.

Styled by Maeve Reilly, the bedazzled outfit created by Bryan Hearns featured a bejeweled bodysuit, nude tights and front and back flaps which are meant to resemble a ninja costume.

However, many people did not look at it that way and were quick to bash her behavior which some people thought to be an appropriation of culture – accusing her of taking the veil worn in Muslim culture and copying it without even knowing the meaning.

One follower wrote how crazy it is that Muslim women are ostracized for covering their faces but Halsey is getting praised.

Another person went so far to comment, ‘You look like a terrorist,’ while one woman wrote, ‘Officially lost all respect for her.’

‘Wtf? As a Muslim woman this is offensive. You have a headscarf on and you’re wearing a bodysuit. If you’re going to wear a headscarf you have to cover your body,’ one woman commented.

Muslim: One Muslim woman took serious offense to her outfit because she didn’t think it was appropriate to cover her face but not her body

Wow: This user shared that they’re officially over Halsey and they lost respect for her

Religion: Another user got very annoyed because they said a headscarf should only be worn for religious purposes

Rooting for you: This user joked that everyone was rooting for Halsey until she went and ruined it with cultural appropriation 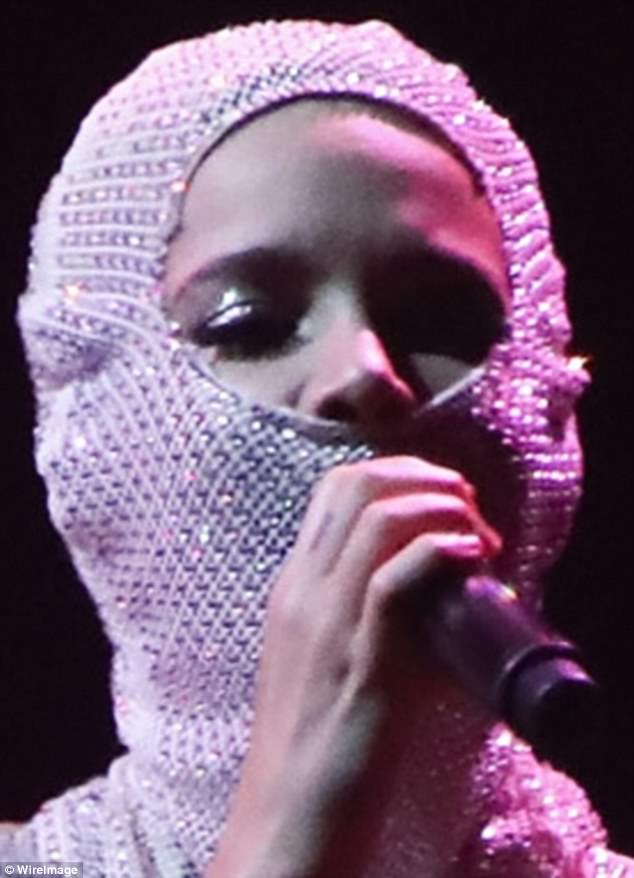 Reaction: Halsey responded to all of the hateful comments saying she didn’t mean for the mask to be anything other than a ninja mask or balaclava

A very annoyed user lectured the singer about her actions saying, ‘Halsey honey baby sweetie cutie this is sooo problematic, you are not the woke kweeeen that we thought you were. You have a lot of unlearning to do.’

The comments just kept coming as people were calling her out for her insensitive action with one woman writing: ‘Honey, headscarves aren’t fashion they’re used for religious purposes.’

In response to all the hateful comments geared towards her, Halsey finally responded to all the accusations saying: ‘It’s meant to look like a balaclava or a ninja mask. Like a robber or a Mortal Kombat character, I assure you. I’m sorry if I caused you any offense.’

Despite the songstress apologizing, people were still not amused and were even angrier as they were now calling her out for saying the headpiece was meant to look like a ninja mask when it actually doesn’t at all.

‘Would it really be that hard not to put on a headscarf?’ one person questioned while another person said, ‘We were rooting for you, we were all rooting for you and you messed it up with cultural appropriation.’

Offensive: The comments from people just kept coming as many people accused her of the offense

Love: Some fans shared how disappointed they were with the singer because she’s ‘better than this’

Conflicted: This user shared that even though they love Halsey, they don’t think it’s appropriate for her to be wearing this

Hard: Another person commented on the fact that she could have avoided all of this backlash if she just never wore the headscarf

It’s fine: A Muslim woman confessed that the mask looks nothing like a hijab and it just looks like a jeweled ski mask

Not offended: Another Muslim woman shared that she does not care at all about Halsey’s accessory

Even though there were thousands of comments from people bashing her, there were many people who came to her defense.

‘All y’all getting moved by something so innocent and silly. ITS FASHION! Grief! And Hals you rocked this outfit,’ one man wrote.

‘Guys it’s a balaclava, please calm down. She didn’t mean anything by it and if you are Muslim than you’d know it’s not a Muslim headscarf. Smh,’ said another person.

Meanwhile, actual Muslim women came out and said that they are not offended by this at all.

‘I’m a hijab and I don’t care,’ said one Muslim woman while another admitted, ‘Ok I’m a Muslim woman too and to be honest she’s just wearing a jeweled ski mask. It’s not a hijab in any sense – it’s fine sweetie.’

One person made total sense when they simply explained her outfit: ‘It’s not a headscarf it’s supposed to be a play on chainmail armor since she is touring the “hopeless fountain kingdoms.”‘ 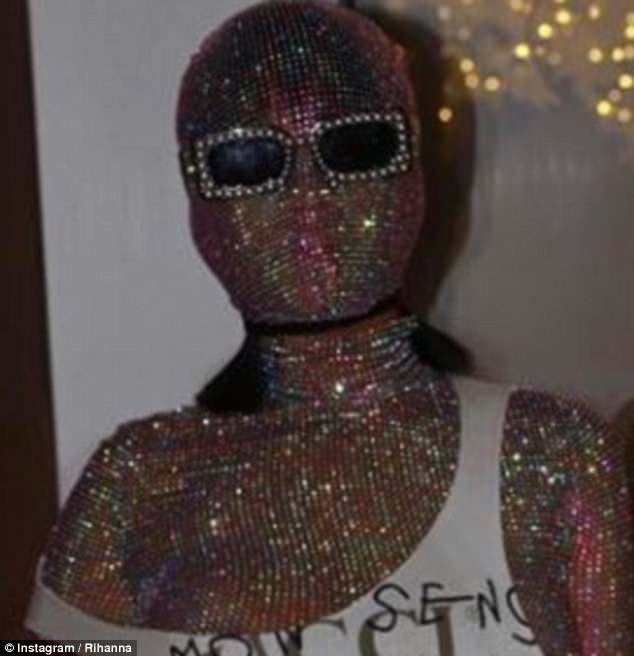 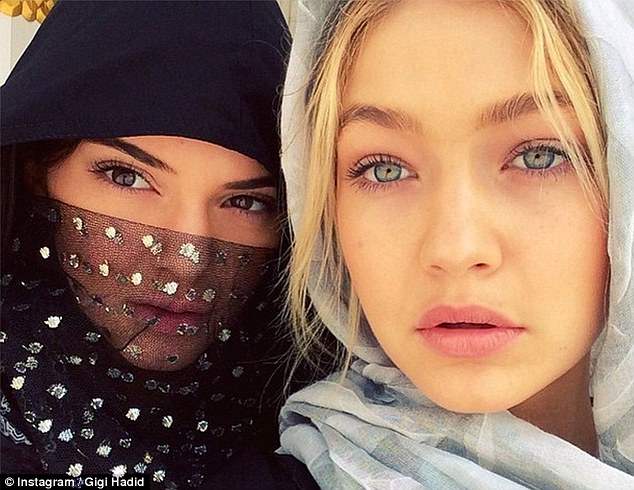 Models: Kendall Jenner, 22 (left), and Gigi Hadid, 23 (right) both wore hijabs for a selfie and were bashed on social media 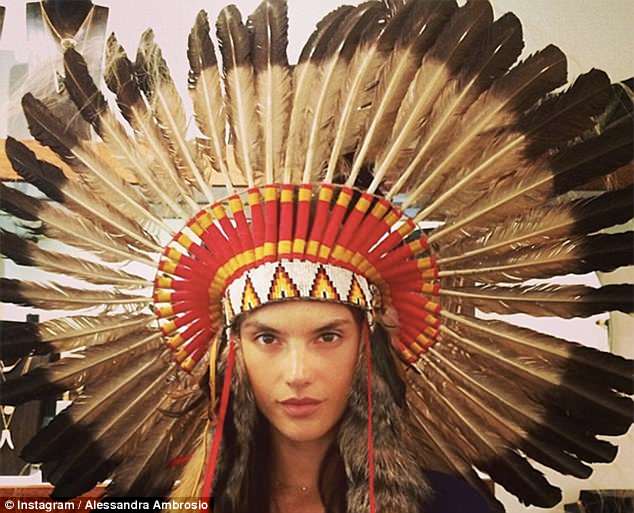 Halsey explained that her headpiece had absolutely no meaning other than just being a fashion statement and Rihanna, 30, has even worn a very similar one to Coachella last year.

Rihanna wore a Gucci chainmail mask that was a bodysuit and headpiece all in one but the mask covered up her entire face, although she never got accused of offending anyone by wearing it.

This is by no means the first celebrity to be accused of cultural appropriation recently – Gigi Hadid, 23, Kendall Jenner, 22, and Alessandra Ambrosio, 37, have all been victims.

Supermodels Gigi and Kendall posed for a photo together wearing hijabs while Gigi kept her face uncovered while Kendall covered her mouth with a sheer veil.