Halwyn Herrmann (pictured), from Lowood in south-east Queensland, used the method to predict the 2011 floods and rain earlier this month

A man who uses an onion and ordinary table salt to predict the future has not been wrong in 60 years.

Halwyn Herrmann, from Lowood in south-east Queensland, used the method to predict the 2011 floods and rain earlier this month.

The 78-year-old has been making the annual predictions every New Year’s Eve since 1958 after dairy farmer Jack Stunhke let him in on the secret.

‘Our neighbour at Prenzlau used the method years ago but he got old and had to sell up, he taught it to me because he wanted someone to learn it,’ said Mr Herrmann.

‘I’ve been doing it ever since then, every since I was 17, that was 60 years ago and I’ve done it every year without fail.

‘Jack’s parents were German and they told him it’s a German tradition, it must be over 100 years old.’ 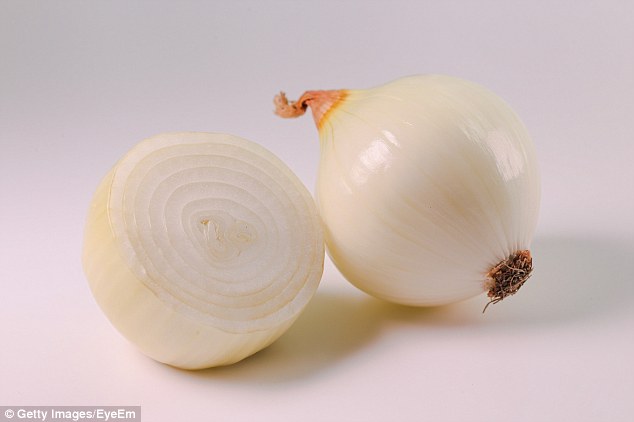 At midnight on the last day of the year the onion is peeled and then cut in half length-wise.

Six onion ring cups are then removed in order from the left, followed by six from the right – one for each month.

Each ring is rubbed with a pinch of salt, and left until 4.30 the next morning when the measuring begins.

Using the naked eye, Mr Herrmann measured the amount of water inside each ring, which predicts how much rain will fall that month.

The more water left inside the shell, the more rain there will be that month, Mr Herrmann said.

The local farmer, who has six children, 23 grandchildren and 13 great-grandchildren, said cattle auctioneers had used his predictions, and he even had a visit from the weather bureau.

Having lost his wife Doreen to cancer two years ago, Mr Herrmann said he was the last person alive who knew how to use the method and hoped to pass it down to his descendants.

The predictions have come in handy over the years, winning Mr Herrman a bottle of rum on one occasion, and helping a friend to collect on a $300 bet.

‘In 2017 we had a very dry January and February, but I had a rain prediction for March.

‘A friend of mine said “if it rains in March you’ll get a bottle of rum” and sure enough it rained and next time I saw him he had a bottle in his hand for me.

‘Another bloke I knew made a bet after Landline said it would be dry for the rest of the year and won $300 after I told him it would rain after September.’

Step 2: At midnight on New Year’s Eve cut the onion lengthwise and let the ring cups fall to the left and right

Step 3: Take the six rings from the left for the months January to June, and the six from the right for July to December

Step 4: Put a pinch of ordinary cooking salt inside each ring and rub it around with one finger

Step 6: Check how much water has gathered inside the onion ring cups using the naked eye

Step 7: Make your predictions based on how much water there is inside each ring – the more water the more rain will fall during that month