HAMISH MCRAE: Will wages keep on going up?

HAMISH MCRAE: Are we witnessing a generational shift in the power of working people?

By Hamish Mcrae For The Mail On Sunday

Wages are shooting up as employers scramble for staff – and not just in Britain, and not just because of Brexit. And it is lower and medium-skilled workers that are most in demand.

Something similar is happening in the US, where for the first time for at least 30 years, lower-paid workers are seeing bigger percentage wage increases than highly-paid ones.

In Europe, the shortage of heavy goods vehicle drivers seems as serious as here, with Germany reportedly short of between 45,000 and 60,000 drivers, and France 43,000.

Shortages: The construction industry is struggling to fill jobs just about everywhere

The construction industry is struggling to fill jobs just about everywhere – even in Ireland, a traditional supplier of building labour to the UK and Europe.

And in the UK, online job adverts show record demand, while a study by the Recruitment and Employment Confederation and KPMG shows that the number of available workers is falling at the fastest rate since 1997.

So we are seeing a seismic shift right across the developed world that has not occurred in most people’s working life. Power used to be with employers. Unemployment was high and the fear of losing a job held down pay. Now that fear has receded.

Instead, companies have to offer signing-on bonuses to get staff. According to the jobs search engine Adzuna, here in the UK these range up to £10,000, with many firms offering £1,000 and more.

There are of course huge uncertainties. The furlough scheme is due to end this month and we don’t know what effect that will have.

Power used to be with employers… not any more

The UK is not yet back to the previous peak of output and getting there will be a bumpy path through the autumn.

The disruption to global supply chains is generating jobs here – if you can’t get stuff from abroad you have to find local suppliers – but those jobs may not be permanent ones.

So until we are back to some sort of normality we won’t know whether this surge in demand for workers is solid, or a blip. But if it does last – and my hunch is that it will – then it will have profound consequences for all of us.

For a start, there will be more inflation. If pay goes up, costs go up. If costs go up, prices go up. The Bank of England expects inflation to peak at 4 per cent this autumn and then fall back.

If that is right, maybe the rise in inflation will be temporary. But if this is a generational shift in the power of working people, then the inflation will stick and rising interest rates will be needed to curb it. 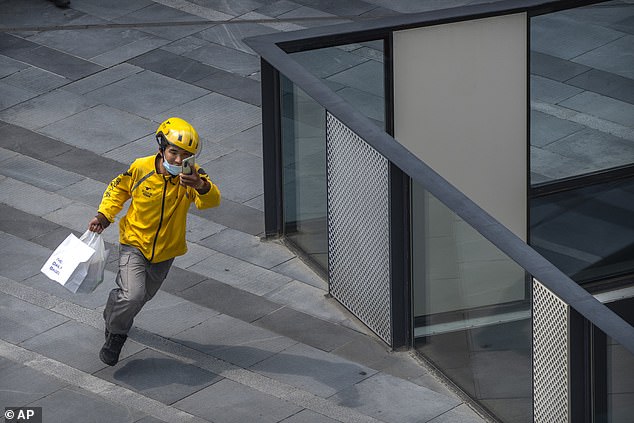 Many jobs can’t be done from home: There is no such choice for delivery drivers, care home workers, builders, restaurant staff

Next, there will be huge pressure to use labour efficiently. Expect a boom in investment, but also a loss of detailed work by companies as they try to use the time of their people more effectively. The rise in National Insurance adds to costs, piling on yet more pressure.

This in turn means better training, because the better-trained people are, the more work they get done. That requires a cooperative approach with employers, with each side figuring out how to save time.

Government can help, partly by supporting training, but more by removing roadblocks. We all have experience of what a palaver it can be to comply with some government regulation, and the Brexit business has added to that.

We need to learn from other countries where productivity is higher

Someone has to pay for bureaucracy, and that someone ultimately ends up being the customer. Of course, regulation is needed, but the case for cutting the compliance burden is overwhelming.

Finally, we need to learn from other countries where productivity is higher, in particular France (though they are even better than we are at creating needless bureaucracy) and the US. Foreign-owned companies in the UK overall have higher labour productivity than UK-owned ones.

It is a long to-do list. But we should not lose sight of the prize: higher living standards, less pressure on inflation, and if wages at the bottom keep rising, a start on narrowing the massive differentials in pay that have unsettled our entire society.

There is a further twist. One of the current raging debates is whether people should be compelled to go back to the office, or whether – or to what extent – they can continue to work from home.

But many jobs, actually most of them, can’t be done from home. There is no such choice for delivery drivers, care home workers, builders, restaurant staff and so on. Those are the jobs where there is strongest demand – and in my book, deserve to be better paid.

So let’s welcome what is happening, even if it does mean higher prices for the rest of us.